Luther: A Church With Corrupt Leadership Can Still Be a True Church 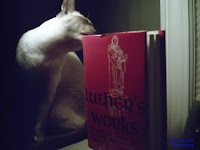 For the sake of clarification, here's a quick follow-up to an early entry, Luther: I honor the Roman Church. She is pious, has God’s Word and Baptism, and is holy. Here Luther explains how a church with corrupt leadership can still be a true church.

Yet often the office and Word remain also among the unbelievers and the godless, as it has happened among the heretics and in the papacy. Although the pope with his followers fights against Christ and His Gospel and makes glosses on the Gospel and Sacrament according to his own head and opinions, nevertheless they have the office of preaching and retain the text of the Gospel, of Baptism, of Christ's Supper, all of which is the ordinance and work of the Holy Spirit. Now insofar as the office of preaching and the Word of the Gospel and of the Sacraments (which is the Holy Spirit's ordinance) are present complete and unaltered, to that extent there follow forgiveness of sins, life, salvation, and all that Christ through the office of preaching and the Word gives and has promised to give, even if unbelievers and godless people have and exercise the office and Word.

We must pay attention not so much to the person as to the office, for the office remains even if some persons are godless and misuse the office.You ought not to look at the person but at the office and Word. Now to the extent that the person deals with the Word and carries out the ordinance of the Holy Spirit, to that extent the Holy Spirit, the forgiveness of sins, and everything good is there. However, insofar as the person deals with you without the Word and disrupts the ordinance of the Holy Spirit, to that extent the devil and everything evil is there. God has not based His office, Word, and ordinance on our person, righteousness, and worthiness, but on Himself. If it were based on our person and righteousness, then we would never be sure of the gifts of God, nor could we be certain of the forgiveness of sins and our salvation.

The question of course is this: in the Roman church, is the Word of the Gospel and of the Sacraments (which is the Holy Spirit's ordinance) present complete and unaltered? Maybe in Luther's mind they were to some extent, but not in mine.
Posted by James Swan at 6:08 AM

>>The question of course is this: in the Roman church, is the Word of the Gospel and of the Sacraments (which is the Holy Spirit's ordinance) present complete and unaltered? Maybe in Luther's mind they were to some extent, but not in mine.>>

While we wait for that definition, I would like all to ponder over the high probability that Dr. Martin Luther knew/understood the Roman Catholic definition of the Gospel at least as well as 21st century American anti-Catholics.

It seems that a response from James is not to be expected anytime soon; so, I would like to encourage those who have had an interest in our topic at hand (i.e. whether or not the Church of Rome is a Christian church) to read THIS NEW THREAD (as well as the entire article/review it discusses), and then ponder over this:

“When it comes to the question of whether or not the Catholic Church is a valid/true Christian church, is more reasonable to side with Martin Luther’s and Charles Hodge’s conclusion, or with that of our present day, anti-Catholic internet writers?”

I've been with family and friends for the last few days.

As to definitions: among all those thousands of books you have, you don't have the information at hand as to how a typical Reformed person defines something like the Gospel?

Forgive me for not dropping everything to reinvent the wheel with you, but first see if you have a few of the standard Reformed Confessions around. I'm fond of the Heidelberg Catechism, the Belgic Confession, and the Westminster Confession & Catechisms.