Augustine: Scripture over icons and statues and sacraments; and the Bondage of the will

1.  A Quote from Augustine that emphasizes Scripture.  (seeing Scripture as the way to connect personally with the face of God, instead of through icons or the Lord's supper, seems to point more toward Sola Scriptura.)

I came across this quote by Augustine years ago when I checked out from a local library a book by Robert L. Wilken, The Spirit of Early Christian Thought:  Seeking the Face of God   Robert L. Wilken is a convert to Roman Catholicism (from Lutheranism), and I had the privilege of meeting him at an ETS meeting in Atlanta several years ago. He was an invited guest of the Patristics group at ETS. I think it was in 2003.  (As I recall, N. T. Wright also had a big speaking role that year, and I think the voting members were still hashing things out over the "Open Theism" controversy with John Sanders, Gregory Boyd and Clark Pinnock.  I am only an associate member, so I am not even able to vote.)    Robert Wilken doesn't see this quote the way it strikes me, obviously.  It seemed to me, in all honesty, that he appeared irritated at me when I asked him some questions about the early church and Mary.  (after his lecture)  Oh well; I decided not to push the issue, and let others also greet him and ask questions.  A lot of his material is very good and useful.  Another book of his, The Land Called Holy,  gave me useful information about the early church and Islam.  It is hard to understand why a person would convert to Rome.
Augustine:  “For now, treat the Scriptures of God as the face of God; melt in its presence” (Sermones 22, 7).
I cannot find these sermons on line.  Apparently they are not part of the ccel.org or "new advent" collections.
That kind of emphasis on the Scriptures seems to put them above the sacraments, and the external church, and rituals, and statues and icons.  Did they even start to have statues in church settings yet then, in Augustine's day?  I consider it a good emphasis toward Sola Scriptura.


2.  A Quote from Augustine that shows his change in 396 AD from libertarian free will, to his belief in the bondage of the will after that point. 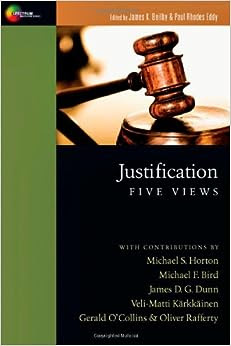 In reading the Five Views book on Justification, I came across an interesting quote by Augustine.

( Note: As of today, April 11, 2014, I have almost read all of the first 3 chapters on "Justification in Historical Perspective", the New Perspective overview, the traditional Reformed View (by Michael Horton) and chapter 7, the Roman Catholic view (by Gerald O'Collins and Oliver Rafferty.   Chapter 4 is called the Progressive Reformed view by Michael Bird, chapter 5 is the New Perspective view by James D. G. Dunn, and chapter 6 is the Deification - eastern Orthodox view.

Augustine had a "significant theological shift" in 396 AD in a letter to Simplicianus.  Before that time, Augustine held to a view of human freedom and God's predestination as "predicated upon divine foreknowledge of future human choices, as opposed to divine predetermination.  However, with his 396 response to Simplicanus' questions on these matters, Augustine essentially rejects his earlier approach - and with it the patristic consensus - and instead locates the reason for the divide between the elect and the reprobate as, ultimately, residing in God's mysterious will.  Decades later, Augustine would explain this 396 reversal:  "I indeed, labored in defense of the free choice of the human will; but the grace of God conquered, and finally I was able to understand, with full clarity, the meaning of the apostle . . . "what hast thou that thou has not received?" (citing Augustine, Retractions 2:1:3, in Justification:  Five Views.  Edited by James K. Beilby & Paul Rhodes Eddy. Inter-Varsity Press, 2011, p. 19. )
There are many quotes of Augustine that confirm he believed in the bondage of the will after this point.  Nick Needham has compiled many in this book, The Triumph of Grace:  Augustine's Writings on Salvation.