Luther: For feelings come and feelings go, and feelings are deceiving; My warrant is the Word of God, Nought else is worth believing.

I came across a poem attributed to Martin Luther (via CARM):


"For feelings come and feelings go, and feelings are deceiving;
My warrant is the Word of God, Nought else is worth believing.
Though all my heart should feel condemned, For want of some sweet token,
There is One greater than my heart, Whose Word cannot be broken.
I'll trust in God's unchanging Word, ‘till soul and body sever;
For though all things shall pass away, His Word shall stand forever."~(Martin Luther)

A quick Google search reveals how far this quote has traveled.  A Google books search demonstrates how often it has been published, particularly in the 21st century. Norman Geisler used a snippet of it in his book, Christian Apologetics. Alistair Begg published it as well.

After spending some time looking for a meaningful reference (I did not come across one), it seems hard to believe that the rhyming quote version is from the pen of Luther. How convenient that the words Luther is purported to have written (either in German or Latin) rhyme so well in English! Then again, the English version of A Mighty Fortress is Our God has an adequate rhyming scheme.  It would be interesting to see the full version of this snippet view from the 1943 Lutheran Witness. It looks to be very similar.


Martin Luther was once asked, "Do you feel as if your sins were forgiven?" "No," he returned, stoutly. "I don't feel that they are forgiven, but I know that they are, because God says so in his Word. [source]

In some early instances, the one asking Luther is Satan. Note the part of this paragraph from 1889:


Martin Luther, in one of his conflicts with the devil, was asked by the arch-enemy if he felt his sins forgiven. "No," said the great reformer, "I don't feel that they are forgiven, but I know they are, because God says so in His Word." Paul did not say, "Believe on the Lord Jesus Christ, and thou shalt feel saved;" but, "Believe on the Lord Jesus Christ, and thou shalt be saved." No one can feel that his sins are forgiven. Ask that man whose debt was paid by his brother, "Do you feel that your debt is paid?" "No," is the reply, "I don't feel that it is paid; I know from this receipt that it is paid, and I feel happy because I know it is paid." So with you, dear reader. You must first believe in God's love to you as revealed at the Cross of Calvary, and then you will feel happy, because you shall know that you are saved. [source]

So it appears that the core of this quote has been around at least 100 years.  It does sound suspiciously like a Table talk entry, but in my brief search of the extant English versions I didn't come across anything. It also sounds like a hymn, but I didn't find anything from Luther's hymnody. There is this hymn God's Word Shall Stand Forever, "attributed to Luther," but this should not be confused with this hymn. 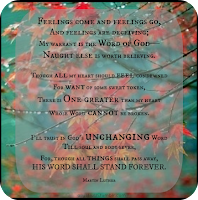 The sentiment of the quote could be demonstrated to be something Luther believed. Without an actual source, I would speculate that the rhyming version was based on the earlier versions noted above, and those earlier versions were based on something in Luther's writings, perhaps those stories about Luther's dialogs with Satan. Consider how easily it would have been for someone to read this old English Tabletalk statement and summarize it in the one of the forms above:


That the Forgiveness of sins must pass through all things.
The law doth justify in no state, calling and art; impossible it is that every thing should go on in a straight line according to the Law, as we see in the grammar which is taught in schools; no rule is so common, which hath not an exception. Therefore, the forgiveness of Sins is needful through life, and is held out in all arts and sciences. The forgiveness of sins is declared only in God's Word, and there we must seek it; for it is grounded on God's promises. God forgiveth thee thy sins, not because thou feelest them and art sorry, for that doth sin itself produce, and can deserve nothing; but he forgiveth thy sins because he is merciful, and because he hath promised to forgive for Christ's sake, his dearly beloved Son, and caused his word to be applied to thee: namely, “Be of good cheer, thy sins are forgiven thee.”

"So now turn from your conscience and its feeling to Christ who is not able to decieve; my heart and Satan however, who will drive me to sin are liars... You should not believe your conscience and your feelings more than the word which the Lord who recieves sinners preaches to you... Therefore you are able to finght with your conscience by saying: You lie; Christ speaks truth and you do not." WA 27, 223 (cf. Paul Althaus, The Theology of Martin Luther, p. 59)
Posted by James Swan at 9:48 AM 2 comments:

"the church wrote the Bible" claim of Roman Catholicism

Please watch and listen to the video first.  You may not understand what I am getting at in my article there after the video of Rod's lecture, without listening to Rod first.
Posted by Ken at 9:09 PM 29 comments: 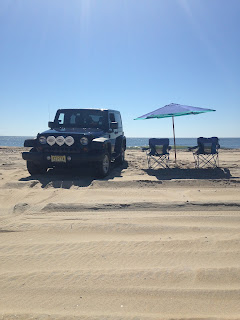 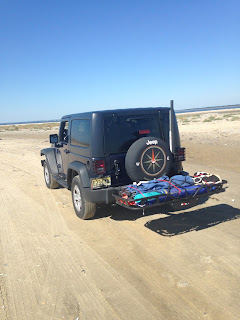 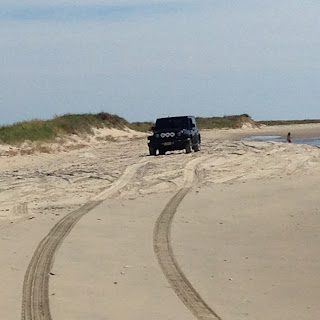 Posted by James Swan at 5:41 PM No comments: