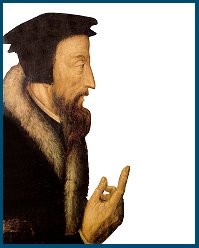 Was John Calvin the tyrant of Geneva, a cruel dictator, persecuting all those who stood in his way? A few years ago I did fact-checking research for an author agreeing with this historical conclusion. I was provided with a number of "facts" about Calvin's Geneva and requested to either verify or dispel them before a book was sent to the publisher.  Below is a sampling of some of the material I went through, along with a few other related entries.

Lest there be any confusion of my view of the man, John Calvin was a fallible person, a man of his times. He had moral shortcomings and sins, but he did not kick cats and steal candy from children while he walked the streets of Geneva, nor was a "dictator."

The goal of going through particular facts is not to defend John Calvin as a Protestant saint. I see the study of any person in church history as an exercise in the love of God and neighbor. How do we love our neighbors in the study of church history? We do so with our words: If we bear false witness against our neighbors, even if they've been dead for hundreds of years, we are not loving them. I say let the people in church history be exactly who they were, warts and all.


Calvin was the Cruel and Unopposed Dictator of Geneva?

Calvin Beheaded a Child in Geneva?

Calvin's Geneva: A woman was jailed for arranging her hair to an “immoral height"

Calvin's Geneva: A rebellious father served four days in prison for insisting on naming his son Claude instead of Abraham
John Calvin: “It is better to burn a few (Anabaptists) at the stake, than for thousands to burn in hell”

Calvin: Arrested and Imprisoned Jerome Bolsec, Then Wanted Him “Rotting in a Ditch"?

Calvin: I have exterminated Michael Servetus the Spaniard.
Calvin Killed Servetus? Before Servetus Killed Calvin?
Calvin: We admit therefore, that ecclesiastical pastors are to be heard just like Christ himself

Bucer: "Calvin is a true mad dog. The man is wicked, and he judges of people according as he loves or hates them"

Luther: "Oecolampadius, Calvin . . . and the other heretics have in-deviled, through-deviled, over-deviled, corrupt hearts and lying mouths."

Luther's High Regard for John Calvin?

Luther and Calvin... Friends or Enemies?
John Calvin: Luther was a Madman and a Beast?
Chew the meat and spit out the bones. Calvin's work as a theologian is not negated because of his personal character any more than a scientist's discovery is negated by his personal character. For an extreme example relevant to Calvin: Servetus was a heretic, but this does not negate his scientific observations about the circulation of blood.
A big chunk of interpreting Calvin boils down to the presuppositions one brings to the interpretation of history as well as being cognizant of avoiding the historians fallacy, presentism, historical anachronism, and post hoc ergo propter hoc thinking, to name a few. Applying this to Calvin's Geneva, importing the modern notion of "tolerance" back into that culture will lead to historical distortion. The modern idea of "tolerance" doesn't fit in the 16th Century. Even the word itself originally meant to "suffer and permit, at most, what one could not manage to destroy" (Bernard Cottret, Calvin, a Biography, p. 207). It becomes absurd to speak about the big bad John Calvin the intolerant dictator and subsequently seeing his adversaries as hippie-esque "give peace a chance" flower children. His adversaries typically had the same societal concept of "intolerance" that he did. Given the opportunity, all parties would probably go down swinging.