50 Years After Death, St. Pio's Body Has Not Decomposed? 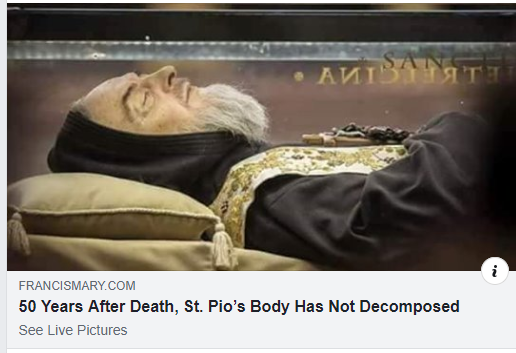 I admit, other than knowing the name, I don't know all that much about Padre Pio. The article though fills in some of the gaps:


"The corpse is held in such high regard due to the fact that before death the monk was able to cure the sick. He also had received visions and suffered stigmata -- bleeding from the hands mimicking the wounds of Christ. Pio could also tell the future and be in two places at once."

While the web-page doesn't document any of this, I was curious if they at least commented on their claim that Padre Pio's body "has not decomposed." Was this non-decomposition before or after the silicone mask "was placed over his face to conceal the decay" as the Washington Post mentioned?
Posted by James Swan at 12:51 AM 4 comments: