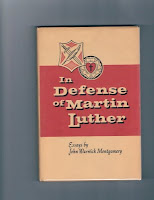 From his own day to the present, Luther has often been pictured as a coarse and brutal man — as (to employ the phrase of a former colleague) a "wild bull of the theological pampas." On confronting his Ninety-Five Theses Leo X is supposed to have said, "These have been written by a drunken German." And the humanists of Luther's time, when they broke with him, frequently treated him as an uncultured, violent controversialist. Similarly, the contemporary humanist philosopher-historian Will Durant flatly asserts that Luther "was guilty of the most vituperative writing in the history of literature." It is true that Luther was of peasant stock and always retained the earthiness characteristic of his Saxon origin; but he was at the same time a scholar who earned the highest academic degree of his day (Doctor of the Sacred Scriptures), who spent his life as a university professor, and whose learning and cultural interests are beyond dispute. In actuality, Luther's literary "vulgarity" was not peculiar to him but was a common phenomenon of the time, and only by refusing to see Luther in historical context can Shirer's argument be sustained. As Roland Bainton has well pointed out: "Luther delighted less in muck than many of the literary men of his age.... Detractors have sifted from the pitch-blende of his ninety tomes a few pages of radioactive vulgarity."
Source: John Warwick Montgomery, In Defense of Martin Luther (Milwaukee: Northwestern Publishing House, 1970) p. 144.
Posted by James Swan at 8:03 PM