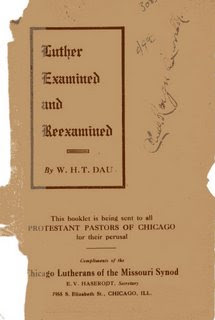 To the Right: The Title Page and Cover from my 1917 copy of Luther Examined and Reexamined: A Review of Catholic Criticism and a Plea for Reevaluation
A while back I mentioned this book: W.H.T. Dau, Luther Examined and Reexamined: A Review of Catholic Criticism and a Plea for Reevaluation (St Louis: Concordia Publishing House, 1917) This is an extremely rare book- I was pleased to see that reprints were circulating for around $50.- $75 last year.
The book is now available online, here.
For any of you that engage in dialog with Roman Catholics about Martin Luther, you really should save a copy of this text and use it when aspects of Luther's life are brought up and blown out of proportion.
This book is one of the few that directly looks at Roman Catholic arguments against Luther "the person". It is a short book, and easy to read. What makes it important is that it interacts with some of the older "anti-Luther" material that is circulating around cyber-space (O'Hare, Grisar, etc).
From the preface:
"One may deplore the pathetic courage which periodically heartens Catholic writers for the task of writing against Luther, but one can understand the necessity for such efforts, and, accordingly, feel a real pity for those who make them. Attacks on Luther are demanded for Catholics by the law of self-preservation...
Rome has never acknowledged her errors nor admitted her moral defeat.The lessons of past history are wasted upon her. Rome is determined to assert to the end that she was not, and cannot be, vanquished. In the age of the Reformation, she admits, she suffered some losses, but she claims that she is fast retrieving these, while Protestantism is decadent and decaying. No opposition to her can hope to succeed.
This is done to bolster up Catholic courage. The intelligent Catholic layman of the present day makes his own observations, and draws his own conclusions as to the status and the future prospect of Protestantism. Therefore, he must be invited to "acquaint himself with the life story of the man, whose followers can never explain away the anarchy of that immoral dogma: 'Be a sinner, and sin boldly; but believe more boldly still!' He must be shown the many hideous scenes of coarseness, vulgarity, obscenity, and degrading immorality in Martin Luther's life...
An attempt is made in these pages to review the principal charges and arguments of Catholic critics of Luther...
This book is frankly polemical. It had to be, or there would have been no need of writing it. It seeks to meet both the assertions and the spirit of Luther's Catholic critics. A review ought to be a mirror, and mirrors must reflect. But there is no malice in the author's effort."
Posted by James Swan at 10:45 PM

It reads much better as a PDF file. I uploaded it here if anyone's interested http://filesbox.info/37LutherExaminedandReexaminedbyW.H.T.Dau.pdf

Dau's claim is nonsense. Rome has no need to debunk Luther the man, only to show that Luther was wrong in thinking Rome apostate. The personal attacks of RCs on Luther derive from the sinful human tendency to descend to personalities rather than from any apologetic necessity.

I open the link but it says, Invalid download link.

Can you please fix that?

Do you maybe mean the "other right"? at least on my computer Microsoft Internet Explorer shows the title page facsimilie to the left of the caption.I've admired the great Doctor of the Reformation for some three decades now.
Here I stand, a modern Luther fan.
A Marine Dad x 2 from the quad Cities, Illinois area