Free Book: "Here I Stand: A Life of Martin Luther" by Roland Bainton 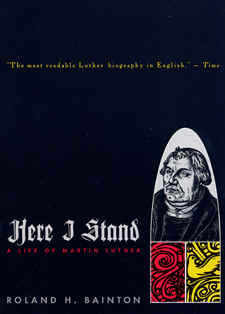 Here is a link to an online downloadable version of the famous Luther biography, Here I Stand: A Life of Martin Luther by Roland Bainton.

I assume those who are interested in finding a Luther biography really don’t want books written for scholars- you want easily readable and digestible material. Probably the most popular biography of Martin Luther written in English is Roland Bainton’s Here I Stand: A Life Of Martin Luther [New York: Mentor Books, 1950]. I always mention this book when asked for recommendations. The reason? The book is easy to find, it’s very affordable, and it’s historically reliable. It’s been in print for over 50 years now.

The book presents the basic “facts” about the 16th Century Reformation in non-technical terms. Bainton’s work is generally very reliable. A review states,


“…Dr. Bainton displays masterful skill in writing a history of those times which is at once technically sound and singularly readable. In relatively few pages he has made those eventful times “come alive” for the lay reader of church history” [Westminster Theological Journal, Volume 13 (Vol. 13, Page 167)].

One knows if they utilize his book as a historical reference, one is not getting “hearsay” or speculative psychological interpretations. One is getting the facts from a man who spent his academic career keenly focused on Luther’s writings. A review from 1950 states,


“Dr. Bainton, who holds the Titus Street Professorship of Ecclesiastical History in the Yale Divinity School, is one of the foremost Reformation scholars in this country—a fact which in itself lends considerable worth to this work”[Westminster Theological Journal Volume 13 (Vol. 13, Page 164)].

It should be pointed out, Here I Stand is not a book interested in expositions on Luther’s theology. Primarily, the book is a historical analysis, and a simple one at that. Also, what one finds in Bainton’s book is a head-on interaction with some of the hot issues surrounding his life. Bainton takes on these issues: like Luther’s later coarseness in his writings, his usage of Cranach’s paintings, his railings against the Jews, the bigamy of Phillip of Hesse, to name a few. Bainton does provide an apologetic in evaluating these diffiucult issues. Bainton though does not act as if nothing's wrong with Luther. His is an evaluation of the facts surrounding the controversial issues and putting them in perspective.
Posted by James Swan at 9:13 AM