Relics Anyone? Roman Catholic Piety in the Sixteenth Century, Before 1517 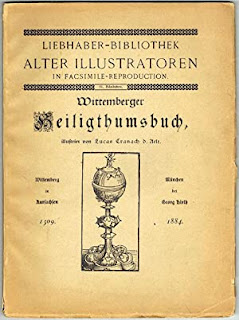 I came across a discussion in which a Lutheran was explaining the existence of relics to one of Rome's defenders:


"Luther commented on relics in his day. The one on the cross was something about having enough pieces to build the ark. He may of added many times over. It seems he said animal bones have been perpetrate as former saints too."

The response from the Roman Catholic side was, "what proof did Luther have for his comments of relics?" I don't have the time to track down where exactly Luther said this or that about relics. However: Luther's world was indeed filled with relics. I have in front of me a very interesting source book: Hans J. Hillerbrand, ed. The Reformation In Its Own Words (Harper and Row, Inc. 1964) pp. 47-49.  Hillerbrand cites a source that preceded Luther's battles against the church (1509). The text states:


The Castle Church at Wittenberg, where Luther probably posted his ninety-five theses, was famous for its extensive collection of relics, as the following excerpt from what might be called the 'official catalogue' shows.

As per the Art Institute of Chicago:


Lucas Cranach produced this souvenir catalogue to promote the prized collection of relics and reliquaries of his patron, Elector Frederick the Wise of Saxony. Copies were printed on paper and more luxurious vellum, although the paper printings are now scarcer. The sequence of woodcuts walks pilgrims through every stage of the yearly viewing; each relic offered a hundred days of indulgence. Pilgrims witnessing them all would have amassed an impressive 500,500 days (1,371 years) of respite from Purgatory. Yet Frederick’s protégé, the radical Martin Luther, would soon speak out against the practice of granting indulgences, and the relic collection would be shown for the last time in 1522. The pages visible here depict Mary Magdalene’s hair, nineteen particles of Saint Cecilia, and other relics. 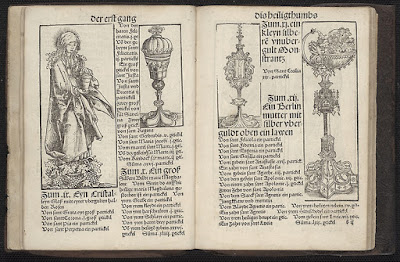 And that was in just one of many collections of relics in the world at that time! History doesn't look like history when you're living through it. That people would recognize the significance of thousands of objects and collect them at the time is beyond belief. I spent my first 30 years in Catholicism, but then married a Lutheran and switched teams. And I've never regretted the moved. Thanks!

And that was in just one of many collections of relics in the world at that time!

That's a great point. Relics still exist now. I recently had an exchange with someone over the body of Padre Pio... that it was incorruptible... I pointed out that the body has been worked on, including a silicon mask. Did that change the person's point of view? not at all.