Luther: “The Gospel today finds adherents who are convinced that there is nothing except a doctrine that serves to fill their bellies and give free reign to all their impulses”

Here's a Martin Luther-related excerpt that appeared on the Catholic Answers Forums:

Luther himself recognized the devastating effects of such admittedly insincere preaching: “The Gospel today finds adherents who are convinced that there is nothing except a doctrine that serves to fill their bellies and give free reign to all their impulses” (Werke, 33, p. 2, in ibid., p. 212).

This is one of those quotes that I categorically classify as "Did Luther Regret the Reformation?" They are typically posted by those dedicated to defending the Roman church. Historically, such "shock" quotes served as propaganda used by pre-1930 Roman Catholic controversialists. Those writers put forth the conclusion that the Reformation was a failure: it didn't produce any real fruit, and Luther's own words and the state of Protestantism at the time prove it. The argument goes: Protestantism isn't a movement of the church. It is the result of heresy, and heresy never leads anyone to true holiness. Then statements are typically brought forth from Luther's career, indicting him of regret for starting the Reformation. Most of these pre-1930 books had fallen into obscurity, but with the arrival of the information explosion brought forth by the Internet, these quotes made a comeback. It's not at all uncommon to visit discussion forums like Catholic Answers and find these "regret" quotes taking center-stage. Let's take a look at this quote and see if Luther was really admitting to the "devastating effects" of his "insincere preaching."


Plagiarism
The person who posted the quote provides obscure documentation (Werke, 33, p. 2, in ibid., p. 212). Such obscurity usually indicates that the material was not taken from an actual straight reading of text written by Luther. This person also stated,

I am a convert from Protestantism who used to idolize Luther until I read his writings (eventually). Before, and while undertaking my doctorate (early music history + performance), I had learned to read primary sources, this is what also lead me to the Catholic Church - the Apostolic Fathers + St Augustine + Aquinas. Today many people will watch a movie about Luther and think they are well informed about him.

I do question the validity of this testimony of learning, especially the claim of reading Luther's writings and the ability to read primary sources to form opinions. Of the two posts of Luther material this person presented in this discussion (#1, #2), neither demonstrates a straight reading of Luther. The material was probably taken from a few web-pages, then cut-and pasted over on to the Catholic Answers discussion forum. I suspect this page, this page, and perhaps this page was utilized. Unless the person posting this material on Catholic Answers wrote these links, much of the content presented is blatant plagiarism. For this quote particularly, this web-page appears to be that which was plagiarized.

Even if he (she?) did compose this web page (or one of the others), I still doubt any of the material came from a straight reading (or "studying") of the "primary sources" for Luther. Some of what was posted was directly plagiarized from Father Patrick O'Hare's, The Facts about Luther. This quote appears to have been plagiarized from this webpage that presents an article written by Plinio Corrêa de Oliveira entitled, Luther Thought He Was Divine! It appears the article was "originally published in the Folha de S.Paulo, on January 10, 1984," so it's probable that the article was not originally in English. This version  provides information about the author, and we can safely rule out the person at Catholic Answers being Plinio Corrêa de Oliveira: he died in 1992.  The original article presents the quote in the exact form with one exception: the documentation. The Catholic Answers participant provided, "Werke, 33, p. 2, in ibid., p. 212."  Some versions of the article say rather, " Werke, XXXIII, p. 2; Franca, p. 440." I did locate a Portuguese version of the article that uses "'Werke', ed. de Weimar, 33, p. 2 – cfr. po. cit., p. 212" on the Plinio Corrêa de Oliveira website along with an English version using p. 440. Whatever page is meant, the confusion seems to be with whoever originally translated de Oliveira's article.

Plinio Corrêa de Oliveira did attempt to accurately document the quote. For his article, he states: "I will cite excerpts from the work of Fr. Leonel Franca SJ titled The Church, the Reform and Civilization (Rio de Janeiro: Editora Civilizacão Brasileira, 3rd ed., 1934, 558 pages)." Notice that de Oliveira didn't actually reference Luther when the article was composed back in 1984, he borrowed from someone else. Here is page 212 and pages 440 of  the 1958 edition of Franca's book, A igreja, a reforma e a civilização. I suspect the 1934 version was reworked and expanded, because the quote actually appears on page 197 in the 1958 edition:

The sentence in question reads, "Evangelho hoje em dia encontra aderentes que se persuadem não ser ele senão uma doutrina que serve para encher o ventre e dar larga a todos os caprichos." with the documentation, "Weimar, XXXIII, 2." It appears that the English version floating around the Internet was de Oliveira's translation of Franca's Portuguese (and that Portuguese was perhaps a translation of German sources).  I'm not sure if  Franca mined this quote himself, or took it from Denifle, Döllinger, or some other earlier source. He cites a number of  pre-1930 Roman Catholic controversialists throughout his book.

Documentation
All parties typically cite either "Werke, 33, p. 2" or "Weimar, XXXIII, 2." This page can  be found here. The text reads: 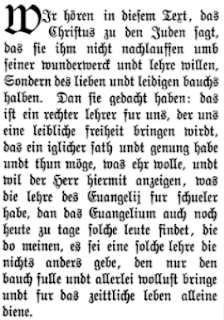 In this text we hear Jesus tell the Jews why they are following Him, namely, not because of His miracles and His teaching but for the sake of their miserable bellies, which they held so dear. For they reasoned: “He is a proper Teacher for us. He will provide us with a physical freedom in which each will be sated and satisfied and enabled to gratify his every wish.” The Lord wants to indicate what sort of disciples the teaching of the Gospel attracts. Even today the Gospel finds disciples who imagine that its teaching affords nothing but a gratification of the belly, that it brings all manner of earthly delights, and that it serves solely the wants of this temporal life. (LW23:5)


Conclusion
Luther does go on to to further lament that people insincerely hear sermons: "Among princes, counts, noblemen and magistrates, town people and country folk, it is quite common to regard the Gospel as a belly sermon." He says this tendency is across the board, from noblemen to country folk, and that it also includes "Our adversaries, too, are proficient in this skill. They can grab for ecclesiastical property, for cloisters and bishoprics (LW 23:6). Luther says to this situation:


Since our Head, Christ the Lord, experienced this, why should we complain if we have disciples who allege that Christ came into the world solely for the sake of our physical well-being? The day will come when Christ will punish such disciples, saying: “This is not what is meant. I preach about a spiritual eating, about spiritual food; I seek the glory of God.” Since He does not confirm them in their idolatrous devotion but upholds the honor of God, His preaching falls on deaf ears. And we fare the same way today (LW 23:7).

Luther also goes on to point out that within a congregation, there would be people in attendance for the wrong reasons:


Well, a preacher must derive what comfort he can from the fact that sows and dogs will be among the hearers wherever the Gospel is preached; it will not be otherwise. These seek nothing else in the Gospel than their own gratification. And if you have this experience, why do you grieve over it so? You are no better than the Lord Christ. If this is the way He fared, you cannot expect to fare differently. There will come a day of reckoning (LW 23:8).

There is nothing in the context of this sermon in which "Luther himself recognized the devastating effects of such admittedly insincere preaching." The context demonstrates rather that Luther was well aware that just as people followed Christ for the wrong reasons in the first century, so also in the sixteenth century. I highly doubt that Plinio Corrêa de Oliveira,  Fr. Leonel Franca, and even the person over on the Catholic Answers discussion forum would be willing to follow their argument to its logical conclusion:  If Luther's preaching was "insincere" because some people took the Gospel message to "fill their bellies and give free reign to all their impulses," so also did the ministry of Jesus attract some of the same kind of people.
Posted by James Swan at 12:00 AM

Great stuff. These folks would be ashamed, but they likely have no clue.

I'm a Brazilian protestant. Your work is vital for the Gospel's cause. Franca's works are being reprinted recently, as the "great catholic intelectual" of Brazil, but it's a shame that most of those lies have actually Brazilian fingerprints (and there are lots of them).

Only a very stupid person would take Plínio's word as fact, he, França and others were the worst 20th century Catholicism could provide. They afraid of great pastors there were former priests. Franca's work was made after he left Brazil to study in Rome, in produce a work that could answer pastor Aníbal's work. Brazillian protestant apologists até forgotten, while the lie-fsctory of catholic apologists works 24/7