Some months back I mentioned that the Vatican was going to release a commemorative stamp featuring Martin Luther (and here I mentioned how the defenders of Rome were responding).  While I've yet to track down anything from the Vatican's website confirming the stamp has bee issued, the Roman Catholic news source Zenit has said it has, and provides this: 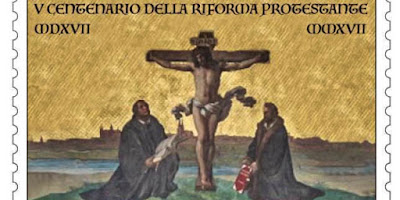 This website says the stamp "will be available beginning November 23, 2017." Zenit provides this description of the stamp:

The postage stamp issued by the Philatelic Office for the occasion depicts in the foreground Jesus crucified and in the background a golden and timeless view of the city of Wittenberg. With a penitential disposition, kneeling respectively on the left and right of the cross, Martin Luther holds the Bible, source and destination of his doctrine, while Philipp Melanchthon, theologian and friend of Martin Luther, one of the main protagonists of the reform, holds in hand the Augsburg Confession (Confessio Augustana), the first official public presentation of the principles of Protestantism written by him.

What's interesting is that the Vatican also issued a stamp commemorating St. Francis de Sales, a person who actively attacked the Reformation.  Zenit says, "He carried out his ministry with the firm desire to safeguard the Church of Rome from the reform of Calvin." Perhaps though in a few years the Vatican will release a John Calvin stamp.

I do feel sorry for many of Rome's defenders. A lot of them "converted" from Protestantism, and in their early zeal enjoyed throwing Luther and the Reformation under the bus. Now, their infallible church honors the memory of not only Luther, but Melanchthon as well. This demonstrates one of the blatant follies of the entire Roman Catholic apologetic enterprise. As a Protestant, there is no really eternal reason for "converting" to Rome. If Rome holds Luther and Melanchthon are penitent at the foot of the cross, then by extension other Protestants are as well.

No analogy is perfect. Rome's apologists remind me of downloading freeware. Sure, the freeware works, but if you want more options, you have to pay some fee to get the expanded version with more features. The goal of Rome's apologists is to convince you to get the upgrade. When I look at the extra options Rome provides, I'm not interested. If the basic version provides Jesus Christ, you can  keep the expanded version that includes saints, purgatory, indulgences, papal infallibility, transubstantiation,  monkery, Mary's immaculate conception and assumption, etc. No thank you.
Posted by James Swan at 8:32 AM

I'm inclined to agree. But we would not be fair to Martin Luther if we do not note he would almost certainly be scandalised by this stamp. Because, in his view, since the Roman church denied justification by faith alone, they no longer had the Gospel. Only a matter this serious could justify schism. The Luther that Bergoglio embraces, the father of respectable progressive opinions, does not exist.

You could do yourself a favor by listening to Dr. Paul Thigpen.

Maybe it will open your eyes to another read on the history of your founder,

PS I don;t believe in luck

John Milton said...
I'm inclined to agree. But we would not be fair to Martin Luther if we do not note he would almost certainly be scandalised by this stamp. Because, in his view, since the Roman church denied justification by faith alone, they no longer had the Gospel. Only a matter this serious could justify schism. The Luther that Bergoglio embraces, the father of respectable progressive opinions, does not exist.

I think Luther would still be scandalized by contemporary Roman Catholicism, although it is a much different breed of cat now than it was then. I don't think he would fall for Rome's current ecumenism, but then again, Luther was not a radical Anabaptist. I think he would still recognize the way of salvation offered by Rome is not that of justification by faith alone, by Christ alone, because of God's grace alone. Current trends in ecumenism try to use this sort of wording, but I doubt Luther would embrace the different meanings poured into the phrases.

Mike Rizzio said... You could do yourself a favor by listening to Dr. Paul Thigpen.
https://www.youtube.com/watch?v=ROhumu2OlgQ
Maybe it will open your eyes to another read on the history of your founder,
God Bless You! Brother PS I don;t believe in luck

I'm familiar with Paul Thigpen. I've mentioned him in these articles:

I will put the video on my list of things to get to. I've covered a wide-range of attitudes and opinions in regard to Martin Luther on this blog. Particularly, I've focused on Roman Catholic interpretations of Martin Luther (simply search through this blog). I would be surprised if Thigpen's interpretation of Luther is something I've not come across before.

89% of Catholics don't know what they believe and neither do their priests. They sound nice on the surface but once you dig in it doesn't take long to find the heresy. I'm convinced none of them can read their Bible apparently.

I do feel sorry for many of Rome's defenders. A lot of them "converted" from Protestantism, and in their early zeal enjoyed throwing Luther and the Reformation under the bus. Now, their infallible church honors the memory of not only Luther, but Melanchthon as well.
And now ,many such ("traditionalists") throw Francis (often referred to as Bergoglio instead) under the bus. And this is after telling us we need a pope for unity, and to rely on/trust what the church teaches rather ascertaining the validity of church teaching by our judgment of what Scripture teaches.

But now the traditionalists ascertain the validity of modern church teaching by their judgment of what past RC teaching is and means (which is Scripture for them).

Given past papal teachings such as that "the one duty of the multitude is to allow themselves to be led, and, like a docile flock, to follow the Pastors," (Vehementer Nos, an Encyclical of Pope Pius X) "to suffer themselves to be guided and led in all things that touch upon faith or morals by the Holy Church of God through its Supreme Pastor the Roman Pontiff, who is himself guided by Jesus Christ Our Lord," and not "imagine that the Church, sent by God to teach and guide all nations, is not conversant with present affairs and circumstances; or even that they must obey only in those matters which she has decreed by solemn definition," (Casti Connubii, Encyclical of Pope Pius XI) as if " assent and obedience may be refused to those judgments and decrees of the Apostolic See, whose object is declared to concern the Church's general good and her rights and discipline, so only it does not touch the dogmata of faith and morals," (Quanta Cura. Encyclical of Pope Pius IX)

then in essence, dissenting RCs can be called Protestants, as "What Do You Call a Catholic Against the Pope?" asserts:

"If you obey every Catholic teaching that meshes with Right-wing sensibility but assume that every teaching that meshes with the Left isn’t equally binding or vice versa, you’re a Protestant. Ditto if you think that aesthetics, important as they are, make a Mass invalid and that a Church who allows the Novus Ordo has committed an error. Same if you think that any scholar on earth, no matter how many times he’s read Saint Thomas, knows more about Church teaching than the Holy Ghost Who speaks through Peter’s successor." - Mary Pezzulo, http://www.patheos.com/blogs/steelmagnificat/2017/09/call-catholic-pope

Yet traditionalists do have a case for some of their dissent, while both past and modern Catholicism is the most manifest deformation off the NT church. (and I personally come short in much).

Just a quick follow-up to my Roman Catholic visitors...

Steve Ray on the Luther stamp: "Frankly I am disgusted. Why not just canonize the schismatic heretic. Good grief?"

Patrick Madrid (about the Luther stamp)- "If true, this is BEYOND surreal. and quite disturbing."

Yup: two of Rome's popular defenders on being ecumenical and honoring the memory of Luther!