It's been fascinating to watch Rome's defenders react to the possibility of the Vatican issuing a stamp to commemorate Luther and the Reformation. First there was the disbelief that the Vatican would do such a thing. Well, it is going to happen. Here's the official 2017 stamp list. Note #16, "5th Centenary of the Protestant Reformation." 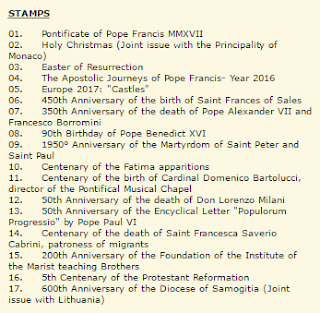 Second, a defender of Rome on a discussion board  thought he came upon the actual Luther stamp: "Did a little research on Italian blogs, and YES, they are, but it is not flattering." Here's what was put forth as the actual stamp: 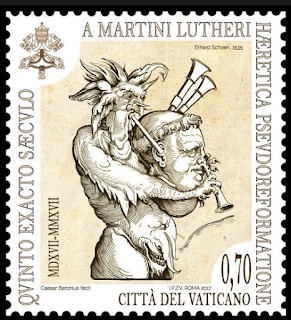 This spoof stamp appears to be the work of this Twitter user. He tweeted, "I hope the Vatican stamp for Luther to be like this!" I doubt it's going to be.  This picture is from a 1535 woodcut by Eduard Schoen.  Even though this image is popularly thought to depict Luther (the artist depicted the devil playing a bagpipe shaped like a monk), this source points out the there is no proof this woodcut was intended to be Luther.

Third, this blogger has presented the most interesting proof of the Vatican / Luther stamp. An article is cited from the January 2017 issue of l’Arte del Francobollo (the blogger also provides actual pictures of the magazine). He provides an English translation of "an interview with Mauro Olivieri, the director of the Holy See’s Philatelic and Numismatic Office." If this is actually not a fake story, the interview states,


Danilo Bogoni : Through newly issued stamps, the Vatican continues to clear the pages of history previously considered, at the least embarrassing: in 2011 the centenary of the unification of Italy, in this 2017 soon the beginning of the Lutheran Reformation. The issue of which a few years ago was unthinkable with the mark of the crossed keys.

Mauro Olivieri : We have to try to understand the present time and be interpreters of the messages that the Holy Father wishes to convey; with the help and understanding of my Superiors of the Governorate, we develop the idea of a modern philately, which mark the important moments of history: no doubt the issue dedicated to the 500th anniversary of the Protestant Reformation marks the rapprochement and overcoming of mutual misunderstandings between Christians, and the philately there is.

Fourth, most fascinating to me is the continued dialog over on the Catholic Answers Forums. There are still a number of hoots and howls from Roman Catholic participants. This is typical of Rome's cyber-defenders. What makes the discussion interesting is the ecumenically-minded Roman Catholic priest that has to keep reminding everyone about the Vatican's pleasant demeanor towards Martin Luther. Consider:

I asked him the following: Is there any sort of infallible statement from the magisterium that binds all Catholics in regard to Luther and the Reformation? If not, why should it ultimately matter "Which dicastery" is followed? Until such defined statements, are not individuals Catholics allowed to have different opinions on non-infallibly defined issues? Here was his response:


I never thought I would see the day when Rome's private interpreters of Rome get chastised by an actual Roman Catholic priest.
Posted by James Swan at 12:41 AM

I want to ask your opinion. In the book of Galatians, we see Paul cursing those who would seek to add even one thing to the gospel; namely, circumcision. Now Mr. Luther said to Zwingli, "We hold the belief of Christ's bodily presence in the Lord's Supper to be essential to salvation, and we cannot in conscience regard you as in the communion of the church....we acknowledge you as friends; we do not consider you as brothers."

As I see it, Luther's addendum to the gospel is on the same level as the addendum in Galatians. Certainly all Christians will get to heaven with an imperfect theology; however, in light of 2 Cor 11:4, there izzzzz such a thing as crossing over into, "another jesus and another gospel", and I fear M.L. crossed that line, since I am quite positive that to believe Christ is metaphysically present in a piece of bread is no more necessary for salvation than there is a man in the moon. What do you think?

P.S. I put "eucharist" in your word search and came up with some articles, but I could not get a fix on where you stand on this issue.