Luther: If God had not closed my eyes and if I had foreseen these scandals, I would never have begun to teach the Gospel 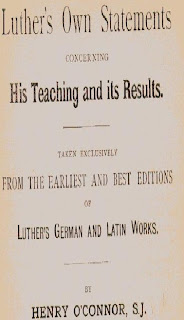 
This quote pops up every once in a while. It's typically used by Rome's defenders as proof of the failure of the Reformation (or something like Luther's regrets or concession to the failure of the Reformation, etc. example #1, example #2, example #3). O'Connor uses it to describe the "Results of Luther's Teaching," specifically, the "Moral Results" that there was a "Lower State of General Morality." The quote was also used in Patrick O'Hare's, The Facts About Luther. O'Hare states,

The new Gospel did not even make Luther himself better. He said: "I confess . . . that I am more negligent than I was under the Pope and there is now nowhere such an amount of earnestness under the Gospel, as was formerly seen among monks and priests." (Walch, IX. 1311.) "If God," he says, "had not closed my eyes and if I had foreseen these scandals, I would never have begun to teach the Gospel" (Walch, VI, 920.) [p. 131].

Documentation
The footnote "Walch. VI" refers to the sixth volume in a set of Luther's works published between 1740-1753 by Johann Georg Walch (Auslegung über die großen u. etliche der kleinen Propheten, nämlich Hosea, Joel und Amos), page 920. This volume from Walch contains Luther's comments on Isaiah and some of the minor prophets.  O'Connor is specifically citing a comment Luther made in regard to Isaiah 49:4b ("Yet surely my right is with the Lord, and my recompense with my God").  The text in question O'Connor is citing appears to be: 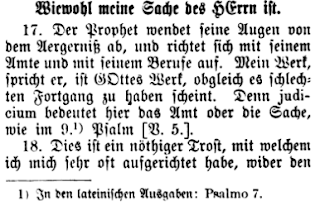 The reason why there are two versions is because the former version was based on a transcript taken down by those who heard Luther speak. The later appears to be based on Luther's actual notes (LW 16:ix; LW 17:viii), first published in 1914. O'Connor did not have access to these notes and relied only on the transcript. The dates for Luther's lectures on Isaiah are bit sketchy. He  began in 1527 and finished in 1530.

There is an English rendering of the Latin text found in LW 17. The specific quote in question can be found on page 174.


4. But I said. There you have it. This is a powerful text. I have labored in vain, for nothing, etc. This is the lament of every preacher, that even though the Word is sure, he has so few disciples. “I preach, but there seems to be no fruit. All are leaving.” We had this experience. At first many applauded the Gospel. Later, when we attacked the Mass and other things, the nobles and monks became our enemies again. Here Christ in His own person complains about the small number of disciples. So we, too, experienced that we lost many. David had this offense in mind in Ps. 88:1: “O Lord, my God, I call for help.” Jeremiah, too, had this offense in mind (Lam. 2:20): “Should priest and prophet be slain in the sanctuary of the Lord?” “I am the only one left.” So Paul says after his labor in Asia that “all who are in Asia turned away from me” (2 Tim. 1:15). This is a fine pleasure! Therefore you must not give up if for your labor you get the reward of ingratitude. We must not lose hope, as though the Word were about to be destroyed. Let fall what may, let come what will. Jeremiah has his 7,000, Paul has his Corinthians, Ephesians, and Timothy. So the seed falls on the rock, on the road, among the thorns, and yet some also falls on good soil. This is the consolation for all preachers so that they do not lose hope, though the traitor Judas should come among the Twelve.

Yet surely My right is with the Lord, and My recompense with My God. Thus He again consoles Himself against this extremely evil offense, as if to say, “it is not My fault.” For that reason He says Yet My right is with the Lord, that is, it is His cause and office. Ps. 7:6 reads: “Awake, O My God; Thou hast appointed a judgment,” that is, an office apart from a profane judgment. With the Lord, that is, “it pleases the Lord, because I have not found it and set it up, but the Lord has chosen Me.” And My work, that is, office, as Christ says, “the work which the Father commanded Me.” This consolation is necessary in the church when we see the scarcity of disciples in the church. As for me, Martin Luther, unless God had closed for me the eyes of reason, I would long ago have stopped preaching and have despaired. Now a boldness, or certainty, comes to my aid. Yet surely My right is with the Lord, although it seems empty and vain. It is nevertheless God’s work, even though I am deserted by brethren and attacked by tyrants. Yet this consolation and the witness of our conscience heartens us, as Paul says (2 Cor. 1:12). Yesterday I said that the words My right is with the Lord are the consolation of all those who preach in vain, although they do not preach in vain. But the paucity of the godly compared with the abundance of hearers seems so great that a remarkable emotion arises in the preacher, saying, “What if I should go astray, what if I should quit? Yet I have performed my office carefully and to the best of my ability.” Nevertheless, stand fast. Let fall and stand, who can (LW 17:173-174).


Conclusion
Contrast this context with O'Connor's paradigm:  "We find Luther owning that he would never have begun to preach, if he had foreseen these unhappy results, and that he scarcely knows whether he ought to continue preaching" (O'Connor, p.56). Really?

Luther's Latin lecture notes provide a helpful context. Luther first lays out the plight of those who minister the Gospel, "I preach, but there seems to be no fruit." Those minsters who feel this way should first find comfort in that the same circumstances were found in the pages of sacred scripture. The second comfort is to be found in that the Lord calls His ministers to preach the Gospel. Reason says that a "scarcity of disciples in the church" points towards failure. But those who preach the Gospel are not to evaluate their ministry by reason, but rather stay faithful to the truth. They are empowered by the Holy Spirit who closes "the eyes of reason" and provokes  "a boldness, or certainty." When Luther says "I would long ago have stopped preaching and have despaired," he's making the statement as a comfort to fellow preachers.
Posted by James Swan at 12:01 AM

Martin Luther was a member of the Catholic Church before he separated from her, its an historical fact. Taking into account what God said and commanded in Matthew 18:17, "If he refuses to listen to them, tell it to the Church. And if he refuses to listen even to the Church, let him be to you as a pagan and a tax collector." So are reformation people today following a man who's been pronounced and penalized by the Church as God himself commanded? YES sir, so clear what Jesus Christ said, however one slices it, the result is still the same as Christ ordained so. Sad to make him a hero!

Your comment is a non-sequitur in regards to the entry under which you commented.

That said.. you mentioned slicing: "Catholic Church" is not equivocal to "Roman Catholic Church." From my perspective, the Roman church cut herself off from the Catholic church by declaring the gospel anathema at Trent, so Matthew 18:17 applies to your particular sect as well.

Luther preached a "Gospel" which was a "new gospel" virtually unheard of before his day. The gospel of the solas (scriptura, fide, etc.) are not scriptural nor found in the heritage of the Church.
St. Paul did foresee the scandals - and preached 2 Cor. 11:4. Of course, Luther and those who followed him will say it is the Catholic Church which preaches a different gospel, but that is not an historically viable argument.

Ambrose (~339-397 AD): "It is ordained of God that he who believes in Christ is saved, freely receiving remission of sins, without works, by faith alone."

Clement of Rome (~30-100 AD): "And we [Christians], too, being called by His will in Christ Jesus, are not justified by ourselves, nor by our own wisdom, or understanding, or godliness, or works which we have wrought in holiness of heart; but by that faith through which, from the beginning, Almighty God has justified all men; to whom be glory for ever and ever. Amen."

There are many, many more. Augustine, Chrystostom, Cyril, etc. And that's just ones listed on the wikipedia "sola fide" page.

Galatians 1:8. One side is anathema. I'm betting it's not the side that gives all glory to Christ alone.