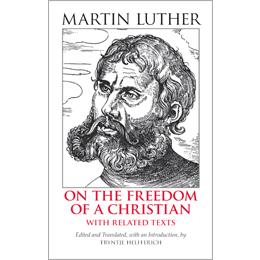 Just when I thought Luther's written corpus couldn't get any bigger, BBC News has reported:  Protestant reformer Martin Luther's 16th Century notes found. The recent discovery appears to involve Luther's notes to revisions to the first edition of his 1520 treatise, On The Freedom of the Christian. Of the volume discovered, BBC News states, "It includes around 50 notes written in red by Luther himself, indicating changes he wanted for a second edition." They also say it was an American "James Hirsten" who made the discovery "in The Humanist Library in Selestat, in the north-east of France."

I was curious about the discoverer, so I Googled around with key terms in reference to the "American" "James Hirsten" and only came up with the same sparse information provided by the BBC. This link (which I could not open) says "James Hirsten, Latin professor of the University of Strasbourg," so I wouldn't be surprised if this other link was that which the BBC used.  The reason why I couldn't find any information on the person mentioned by the BBC is because it appears to me they misspelled the name of the discoverer, as I think "James Hirstein" is the actual name. Note this link: Un ouvrage de Martin Luther annoté de sa main découvert en Alsace.

None of the links I've gone through mention if there are any significant changes Luther wanted to make to the second edition. The Freedom of the Christian already exists in two versions, Latin and German, so when English versions are consulted, there could already be some slight variances depending on which was used for the translation (most English translations are based on the German). These newly discovered changes appear to refer to the Latin version. Given the chaotic and intense time period in which this treatise was written, that these changes never made it to print leads me to conclude that Luther was not overly concerned about them, so I would be surprised if anything of substance is found in this recent discovery.
Posted by James Swan at 6:50 AM