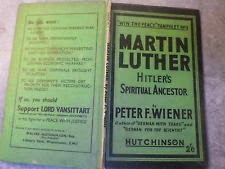 This morning I re-read my earlier blog entry, Finding Contexts in Peter F. Wiener's "Martin Luther: Hitler's Spiritual Ancestor" (2009). Now six years later, I find it interesting that little has changed with the popular online use of Wiener's book. So many of the quotes I come across find their way back to this book. I suspect Mr. Wiener is no longer living, so it's unfortunate for the author that he probably didn't live to see how popular his book would be in cyberspace. In my 2009 entry I noted how ecumenical the book is, being published by both Atheists and Roman Catholics (the enemy of my enemy is my friend). 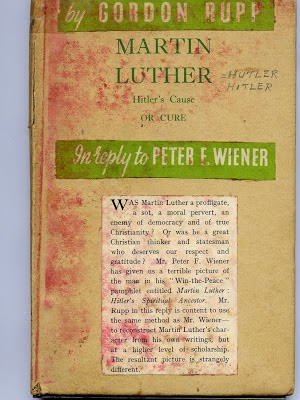 Unfortunately, the most direct response to Wiener is hard to track down. A contemporary of Wiener, Gordon Rupp, published, Martin Luther: Hitler's Cause Or Cure? (Lutterworth Press, 1945). Used copies are around from time to time.  I've utilized this book in some blog entries, but getting it online would be the best antidote to Wiener's work.

2012 saw the release of Eric Gritsch, Martin Luther's Anti-Semitism: Against His Better Judgment (Grand Rapids: Eerdmans, 2012). This is one of the more reader-friendly books on this subject, and what's interesting is not only is Gritsch a respected Luther scholar, he mentions in his recent book that he had been "a member of the Hitler Youth during the final days of World War II" (p. xiii). Before someone thinks that Gritsch would be sympathetic to Luther because of the events of his youth, Gritsch states, Luther is not simply "anti-Judaic" but rather "genuinely anti-Semetic" "in accordance with the broad, contemporary definition of anti-Semitism."

In the book as well he comments on the Wiener / Rupp feud. I found his analysis interesting, if only for his description of Wiener's book :


In 1945, a literary feud put the theme "Luther and the Jews" into the limelight. One year earlier, a British teacher of German and French, Peter F. Wiener, published a book contending that Luther was Hitler's spiritual ancestor. It is sheer propaganda with the intention to show that Luther's radical anti-Semitism made him "one of the darkest figures history has yet produced." This is "proven" by a chain of historical distortions: Luther tolerated Jews in order to gain their support in his struggle against the papal church, but turned against the Jews when they did not join him; his demonic anti-Semitism was not grounded in theology because his "religion" was a "Teutonic anti-Christian faith." Wiener misquotes, misinterprets, and intentionally misunderstands . His work "is nothing but a historical forgery based on ignorance and malice" [so says Gordon Rupp].

The British Luther scholar Ernest Gordon Rupp offered a devastating, yet elegantly executed critique. One cannot win the peace, Rupp observed, by reviving the propaganda of Joseph Goebbels, the late but unlamented Minister of Nazi Propaganda. "The Nazi uniforms which Mr. Wiener has put on Luther fit very oddly on the facts: they were not made for him, nor he for them. Whatever be the truth about Luther, it is not Mr. Wiener's caricature." [Eric Gritsch, Martin Luther's Anti-Semitism: Against His Better Judgment (Grand Rapids: Eerdmans, 2012), 118-119].

Plainly put, Dabney faulted lutheranism for its erastianism. The state appointed teachers and preachers. The teachers were not all converted and came up with higher criticism. Without a reliable word from the Lord, God "died" according to Nietsche. From there to the death of those made in his image, is no great leap.
So an argument or concatenation can be proposed, but that Luther per se is guilty of fathering Hitler? Hind sight is 20/20 for hypocrites, as long as they don't look in the mirror.

Thank you for addressing this book by Peter F. Wiener. Any chance you can recommend a possible place to order the Rupp, E. Gordon. Martin Luther, Hitler's Cause or Cure? book??