Where is Calvin's Commentary on Revelation? 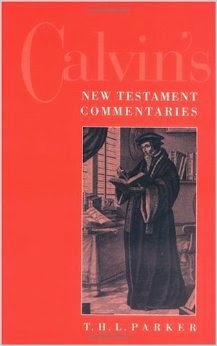 One popular theological tidbit circulating in Reformed circles is the revelation that Calvin did not produce a commentary on the Book of Revelation.  T.H.L Parker gives some interesting facts about this:

1. In John Bale's commentary on Revelation (The Image of Both Churches, 1547), he lists the commentaries on Revelation that he's seen, and those that are thought to exist that he has not seen. He includes Calvin in his list.

All three of these instances appear to be spurious. Parker examined the anonymous publication and determined  that the method and exegesis were not Calvin's.

4. A second-hand report (at best) suggests Calvin did not write on Revelation because he said he could not understand the book. This quote is republished by Parker on pages 117-18, and Parker says he's "apt to believe he did not say it at all" (118).

5. Parker suggests that Calvin did not write on Revelation due to a theological reason. Calvin saw the Old Testament as concealing Christ, but the New Testament presented Christ clearly. "...[H]e may have considered that apocalyptic is foreign to the New Testament as if it involved a re-veiling of the clear and unambiguous Gospel" (Parker, 119).

The difficulty is chapters 6-18.

I never understood why Luther said some negative comments about the book of Revelation; as chapter 5 is amazing as it points to the atonement and worship, as is chapter 4 on God's Sovereignty and throne and worship. Chapters 1-3 teach the important of healthy balanced local churches.

Ken: Perhaps I should post the 2nd hand story in which Calvin is said to claim he didn't understand Revalation.

In regard to Luther: the negative comments were from his early preface to the book. He later went on to revise his comments, adding a significant amount of material as well. His apocalypic expection increased his approval for the book.

Of course, one natural explanation is that Calvin didn't write a commentary on Revelation because he died at 55. And, of course, he was a very busy guy. It's not as if he spent all his time writing commentaries.

Maybe he was afraid to tackle it because it says in revalations anyone who removes one word from that particular book,their name would be removed from the lambs book of life, also any word added, all the plagues in the book of revalations would be added to that person as well.

I am not sure why he didn't comment on Revelations, but to me it is the most important book outside of the the Gospels for knowing the future of the Church. I find that what John Wesley wrote in his notes on the Bible reveals a lot of what Reformers taught and thought, but tied it all together. Especially regarding Revelations 17. Many today believe this to be a one world government to take over during the 7 year tribulation from Rome. Wesley believed the "Whore of Babylon" to be the Papacy which was pretty common during his time and I believe is still relevant today. See https://www.christianity.com/bible/commentary.php?com=wes for more info.

Maybe the reason he didn’t write on Revelation is because he didn’t believe in a future restoration for the nation of Israel. Augustine replaced the ant future promises for Jerusalem with the Church. Calvin basically follows the Roman Catholic Church in his love for Augustine who made amillenialism so popular. Same with Luther. You can’t understand prophecy if you don’t believe in the literal future promises for Israel.

Perhaps Calvin avoided Revelations because of its absolution ... As the conclusion and final words of the Bible it closes the door on redemption and salvation. If by then, you continue the acts mentioned in Revelation 21-8 and cling to a temple mentioned in 21-22... condemnation to hell is forthcoming.

I love the commentaries of Calvin but it does seem incomplete without Revelation .. We have the beginning in Genesis and we know there will be an ending of sorts with Revelation, which is to me an important part of a commentary set .. but it is what it is..

Wake up! I recently had a minister in Willcox, Az tell me he discovered a new point in the Book of Revelation. I wrote back, "Congratulations! After 2000 years God has finally decided to reveal what he's talking about."Revelation is mostly 'Mystery', reminiscent of the Roman Church. It was created in the 135 AD and made canonical in 413 AD. The author John may not be the apostle John. Luther rejected it, Zwingli rejected it and John Calvin refused to put it into his 'Institutes' Like myself, John Calvin declared he didn't understand it. Nobody really does. It is a windfall for those clerics who wish to 'help' you master the book, while they quickly master you! "Do not worry about tomorrow, for tomorrow will worry about itself. Each day has enough trouble of its own."--Jesus Christ