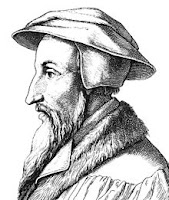 I've been intrigued by the alleged "Mariology" of the Reformers for years because of the argumentation of Roman Catholic apologists. I recently came across Wikipedia's John Calvin's views on Mary entry. I didn't get far into the entry before I came across a few facts that appeared odd. Not everything though in the article is suspect, as will be demonstrated below. Previous entries are as follows:

Wikipedia's "John Calvin's views on Mary" (Part 4) Calvin Did Not Refer to Mary as "Mother of God"?

The wiki article makes some good points on Calvin denying the role of Mary and the saints in salvation. This section from the Wiki article, while not helpfully documented, does demonstrate how different Calvin's views on Mary were as compared to the Roman Church of his day:


Calvin's soteriology was grounded in the belief that Christ alone is sufficient for salvation. He regarded any opposition to this doctrine as "pure defiance",[12] and consequently denied any notion of Mary as a participant in the mystery of salvation. He rejected the Roman Catholic belief that Mary acts as a mediator between man and God as idolatry, since only Christ can fulfill this role.[13] Calvin forbade prayers and supplications to Mary for the same reason, further arguing that praying to the dead is not a practice supported by Scripture.[14]


Concerning the intercession of the Virgin Mary and departed saints, come back always to this principle, that it is not for us to appoint advocates in paradise, but for God, who has ordained Jesus Christ a single one for all. Also, that our prayers ought to be offered up in faith, and therefore ordered by the word of God, as saith St. Paul in Romans 10. Now, it is certain, that throughout the word of God there is not a single syllable of what they say; wherefore all their prayers are profane and displeasing to him. If they further reply to you, that it is not forbidden to us, the answer is easy: that it is forbidden to us to set about anything according to our own proper fancy, yea, in matters of far less moment; but above all, that prayer is a most high privilege, and too sacred to be directed according to our fantasy. Nay more, they cannot deny that their having recourse to the saints arises from pure distrust that Jesus Christ alone would be sufficient for them.

The later part of the quote discussing prayers to the dead is from a source that's not available to me, Algermissen's article on Calivn in Marienlexikon. Such sentiment from Calvin is easily documented from the Institutes:


When my adversaries, therefore, raise against me the objection that prayers for the dead have been a custom for thirteen hundred years, I ask them, in turn, by what word of God, by what revelation, by what example, is this done? Not only are testimonies of Scripture lacking on this point, but all examples of the saints that one may there read of show no such thing (III.5.10).

The Wiki article goes on to assert:


[Calvin] regarded the Catholic belief that Mary can intercede on behalf of the dead to be "nothing but blasphemy" ("exsecrabilis blasphemia"), on the basis that only God has the authority to determine the amount of grace given to each individual in his divine will. He therefore did not condone praying to Mary for the salvation of dead sinners, as their eternal fate was already sealed long before creation.[14]

The documentation once again refers to Algermissen's article on Calivn in Marienlexikon. It's very possible the reference is to The Articles Agreed Upon by the Faculty of Sacred Theology in Paris (1542). There Calvin states,


For the Sorbonnists, who so often make mention of their herd, (gregis,) have here proved, that they are a herd of swine. That invocation of the Virgin which they have hitherto used in seeking the grace of the Spirit, who sees not to be execrable blasphemy? to say nothing of those titles full of anathema, by which, while they would honor the Virgin, they most grievously insult her, calling her “the Queen of Heaven, and Treasury of Grace.” We hear how Christ tells us, that he will send the Spirit of truth from the Father, and bids us ask in his own name, (John 14:26; 15:26.) This, therefore, is the right rule of asking, and the sure method of obtaining. But to flee to the Virgin, passing by Christ, and in prayer to address her instead of God, who sees not to be a profane practice? It is assuredly altogether alien from the Word of God. Nay, there is extant a Canon of the fourth Council of Carthage, forbidding the invocation of saints at the altar. Here, also they (the Sorbonne) give a still clearer manifestation of their absurdity, when they say that this salutation is prescribed to us by the gospel. It is true, Gabriel was sent, as Luke relates, to salute the Virgin in these terms; but are we Gabriel? When was this ever commanded to us? What access have we to the Virgin, for the purpose of holding conference with her? Besides, why use the salutation at the time when they implore the influence of the Spirit, unless to pervert it into a form of prayer?