Luther: We cannot claim to fathom completely the meaning of a single verse of Scripture

The following is from the web page Luther, Exposing the Myth, under the heading "Sacred Scripture":

It is worth noting that while Luther claimed for himself the right to interpret scripture according to his own view, and claimed that he was intelligent enough to judge anyone and everything by scripture alone yet he openly affirms that "We cannot claim to fathom completely the meaning of a single verse of Scripture; we succeed in apprehending only the A B C of it, and even that imperfectly." - Luther, Table-talk, trans. Gustave Brunet, Paris, Garnier, 1844, pg. 288.

Luther Exposing the Myth says their stated purpose is to show that "from Luther’s own words we shall see him for what he really was, that is a rebellious apostate, who abandoned the faith and led many into apostasy from God under the guise of “reformation” in order to follow his perverse inclinations." With this quote, they attempt to show Luther contradicted himself saying he could interpret the Bible, but elsewhere claimed he could not.

Documentation
Luther, Exposing the Myth cites "Luther, Table-talk, trans. Gustave Brunet, Paris, Garnier, 1844, pg. 288." First, the Table Talk isn't something Luther actually wrote. It's something he's purported to have said. Second, based on previous documentation, it's improbable that Gustave Brunet's book was actually used by Luther, Exposing the Myth (they typically have compiled their assortment of Luther quotes from various secondary English sources). Third, in regard to Gustave Brunet's French translation of the Table Talk: Les Propos de Table,  Preserved Smith has provided a brief overview of this translation. According to LW 54, Brunet's French translation follows John Aurifaber's translation (LW 54, introduction). Page 288 can be found here.

Context
In Brunet's French translation, the quote in question states,

The German text can be found here: 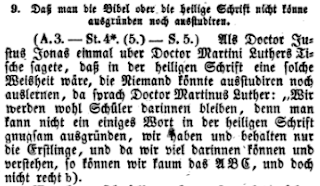 English translations are available in older versions of the Table Talk. For instance:


Dr. Jonas Justus remarked at Luther's table: There is in the Holy Scripture a wisdom so profound, that no man may thoroughly study it or comprehend it. "Ay," said Luther, "we must ever remain scholars here; we cannot sound the depth of one single verse in Scripture; we get hold but of the ABC, and that imperfectly. Who can so exalt himself as to comprehend this one line of St. Peter: 'Rejoice, inasmuch as ye are partakers of Christ's sufferings.' Here St. Peter would have us rejoice in our deepest misery and trouble, like as a child kisses the rod."

In this English version, the line that begins, "Who can so exalt himself as to comprehend this one line of St. Peter..." is based on a translation of a few sentences from the next paragraph in the German version (and it can also be found in Brunet's French translation).

Conclusion
In context, the remark simply points out the profound depth of the Scriptures. It's not that the Scriptures can't be understood according to Luther, it's that they have a rich unfathomable depth due to the fact they are the very words of God. Note the example given to Peter's words.

This quote doesn't appear to be in LW 54, but something very similar is presented:

When Dr. Jonas﻿﻿ said that the mind of man cannot comprehend articles of faith and that it is enough that we begin only to assent, the doctor [Martin Luther] said, “Yes, dear Dr. Jonas, if one could believe them the way they’re written, our hearts would leap for joy. That’s certain. Accordingly we won’t arrive at the place where we comprehend them. In Torgau a wretched little woman once came to me and said, ‘Ah, dear Doctor, I have the idea that I’m lost and can’t be saved because I can’t believe.’ Then I replied, ‘Do you believe, dear lady, that what you pray in the Creed is true?’ She answered with clasped hands, ‘Oh yes, I believe it; it’s most certainly true!’ I replied, ‘Then go in God’s name, dear lady. You believe more and better than I do.’

“It’s the devil who puts such ideas into people’s heads and says, ‘Ah, you must believe better. You must believe more. Your faith is not very strong and is insufficient.’ In this way he drives them to despair. We are so constructed by nature that we desire to have a conscious faith. We’d like to grasp it with our hands and shove it into our bosom, but this doesn’t happen in this life. We can’t comprehend it, but we ought to apprehend it. We should hold to the Word and let ourselves drag along in this way.” [LW 54:453].

This is an excellent read this morning.

I hasten to posit two verses that seem to me corroborate the post.

Eph 3:8 To me, though I am the very least of all the saints, this grace was given, to preach to the Gentiles the unsearchable riches of Christ,

How does one preach something unsearchable? How does one go onto maturity unless God permit it?

As we all adhere, those chosen by His Faith at work actively within us, the Word of God is living and active and as Jeremiah says, acts upon us like a hammer at times!

There is another framework upon which those verses (Ephesians 3:8 and Hebrews 6:3) compend.

Both Paul at Romans 12:1 (ESV/reasonable) and Peter at 1 Peter 2:4 (ESV/word) use a Greek Word, [logikos] when they begin their apostolic work starting the teaching others about the feeding process of babes in Christ. Logikos is used only twice in the New Testament, at those two places.

Jesus Himself told Peter to "feed my lambs" in his famous do you love me three part query of him at John 21.

I am convinced also that Luther still has a lot for us in these days as do a lot of other very reformed men and women of God God has anointed over time.

I am similarly convinced of that about you, too, James! I guess that's why I keep coming in here and learning as much as I do reading and following along as you post? :)

Thanks for being obedient to the Faith and doing what you do, first, to the glory of God and then to the edification of the Saints.

It seems to me you are indeed conforming to the answer Jesus gave the man and for the same purpose, to silence the reprobates and charge with energy the Elect, here:

Mar 12:28 And one of the scribes came up and heard them disputing with one another, and seeing that he answered them well, asked him, "Which commandment is the most important of all?"
Mar 12:29 Jesus answered, "The most important is, 'Hear, O Israel: The Lord our God, the Lord is one.
Mar 12:30 And you shall love the Lord your God with all your heart and with all your soul and with all your mind and with all your strength.'
Mar 12:31 The second is this: 'You shall love your neighbor as yourself.' There is no other commandment greater than these."
Mar 12:32 And the scribe said to him, "You are right, Teacher. You have truly said that he is one, and there is no other besides him.
Mar 12:33 And to love him with all the heart and with all the understanding and with all the strength, and to love one's neighbor as oneself, is much more than all whole burnt offerings and sacrifices."
Mar 12:34 And when Jesus saw that he answered wisely, he said to him, "You are not far from the kingdom of God." And after that no one dared to ask him any more questions.

Wow, a comment on one of my "Luther, Exposing the Myth" entries... wonders never cease!