My Last Post before Annihilation on Oct. 21, 2011: Bavinck and Calvin on the Necessity of the Reformation

Since it's the end of the world on October 21, 2011, I'm saddened to not be able to celebrate Reformation Day 2011. Here then is my last blog post before being quietly and painlessly annihilated in my sleep (while Mr. Camping and the true believers are ushered gloriously into eternity). Even in my last few gasps of air, I remain staunchly committed to refuting Romanism.


While studying today I came across an interesting quote from Reformed theologian Herman Bavinck. The following quote is from his Reformed Dogmatics Volume 1, p. 81-82. Here Bavinck describes the Reformation period and the need for change when the church will not budge in her evil ways:


On the one hand, there is a revolutionary spirit that seeks to level all that has taken shape historically in order to start rebuilding things from the ground up. There is, however, also a false conservatism that takes pleasure in leaving the existing situation untouched simply because it exists and – in accordance with Calvin’s familiar saying – not to attempt to change a well-positioned evil (malum bene positum non movere). At the proper time everywhere and in every sphere of life, a certain radicalism is needed to restore balance, to make further development possible, and not let the stream of ongoing life bog down. In art and science, state and society, similarly in religion and morality, there gradually develops a mindless routine that oppresses and does violence to the rights of personality, genius, invention, inspiration, freedom, and conscience. But in due time there always arises a man or woman who cannot bear that pressure, casts off the yoke of bondage and again takes up the cause of human freedom and that of Christian liberty. These are the turning points of history. Thus Christ himself rose up against the tradition of the elders and returned to the law and the prophets. Thus one day the Reformation had the courage, not in the interest of some scientific, social, or political goal, but in the name of Christian humanity, to protest against Rome’s hierarchy. Frequently, even in the case of the sects and movements that later arose in the Protestant churches, that religious and ethical motive is undeniably present. So-called biblical theology also defends an important part of religious truth. When a church and theology prefer peace and quiet over struggle, they they themselves trigger the opposition that reminds them of their Christian calling and task. Rome, in the name of the case, can never approve of such opposition and has to condemn it in advance. The Reformation is itself the product of such opposition and cannot withhold from others what it assumed for itself. And Holy Scripture, thought far removed in spirit from all revolutionary resistance, nevertheless, in Peter’s regal statement “We must obey God rather than man” (Acts 5:29), legitimates the right to oppose every human decree that is contrary to the Word of God.

I was interested in Bavinck's citation of John Calvin (bolded above), which was not documented, so I searched it out. Bavinck appears to be citing The Necessity of Reforming the Church. 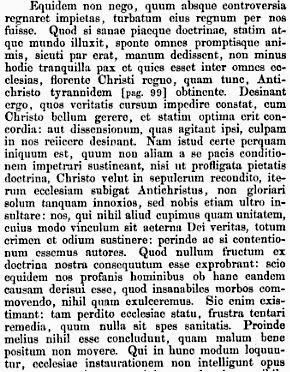 
I, for my part, deny not that when impiety reigned, her kingdom was disturbed by us. But if, at the moment when the light of sound and pious doctrine beamed upon the world, all, as in duty bound, had spontaneously,and with ready mind, lent their aid, there would at the present day be no less peace and quietness in all the churches, (the kingdom of Christ flourishing,) than in the days when Antichrist tyrannised. Let those who, it is manifest impede the course of truth, desist from waging war with Christ, and there will instantly be perfect concord; or let them desist from throwing upon us the blame of dissensions, which they themselves excite. For it is certainly most unfair, while they refuse all terms of peace unless Antichrist be permitted, after putting the doctrine of piety to flight, and as it were again consigning Christ to the tombs to subjugate the Church; it is most unfair not only to boast as if they themselves were innocent, but also to insult over us; and that we, who desire nothing else than unity, and whose only bond of union is the eternal truth of God, should bear all the blame and odium, as much as if we were the authors of dissension. In regard to the allegation, that no fruit has been produced by our doctrine, I am well aware that profane men deride us, and allege that in probing sores which are incurable, we only enlarge the ulcer. For their opinion is, that the desperate condition of the Church makes it vain to attempt remedies, there being no hope of cure; and they hence conclude that the best course is not to meddle with an evil well fixed. Those who speak in this way understand not that the restoration of the Church is the work of God, and no more depends on the hopes and opinions of men, than the resurrection of the dead, or any other miracle of that description. Here, therefore, we are not to wait for facility of actions either from the will of men, or the temper of the times, but must rush forward through the midst of despair. It is the will of our Master that his gospel be preached. Let us obey his command, and follow whithersoever he calls. What the success will be it is not ours to inquire. Our only duty is to wish for what is best, and beseech it of the Lord in prayer; to strive with all zeal, solicitude, and diligence, to bring about the desired result, and, at the same time, to submit with patience to whatever that result may be. [source]

See you on the other side!