Luther, Satan, and the Inkwell

"Doctor Luther sat at the Wartburg translating the Bible. The Devil did not like this and wanted to disturb the sacred work, but when he tried to tempt him, Luther grabbed the ink pot from which he was writing, and threw it at the Evil One’s head. Still today they show the room and the chair where Luther was sitting."- Jacob and Wilhelm Grimm, Doktor Luther zu Wartburg, Deutsche Sagen (German Legends), vol. 2 (1818), no. 562.

Luther hurled an inkwell at Satan? This tale first appeared towards the end of the sixteenth century, and is said to have been told by a former Wittenberg student. In this early version, the Devil in the guise of a monk threw an inkwell at Luther while he was secluded in the Wartburg. By 1650, the story shifted to Luther throwing the inkwell at Satan. Like any bizarre legend, the story morphed, and houses where Luther stayed had spots on the walls, and these were also said to be inkwells that Luther threw at the Devil. The tale still makes the rounds thanks to the Internet:


"Saint Martin Luther threw an inkwell at the devil!! This is where the famous incident with the inkwell took place. Luther had just begun his memorable translation of the Bible into German. Satan saw the handwriting on the wall and was furious. His demons gave him no rest day or night. . . . At last Luther took his inkwell and threw it at the devil! The mark is still to be seen on the wall. God's Word translated into German gave the devil a fatal wound" [source]

Of course, the Internet being the new wild west, one can typically find anything being put forth as true. It's just another reminder to choose web-sources with discretion. On the other hand, I was recently at a church service in which the minster brought up Luther and this story, and gave a look over to me for approval. I cringed. Ah well, I think by my look he realized this was a story to be told as a fictitious story, if mentioned at all. No harm done, the sermon remained intact.

Historical Studies Using the Ink Well Myth
But there are contexts in which this story should be identified immediately as apocryphal: historical studies. Recently I was sent a link to some Luther information taken from the book A World Lit Only by Fire: The Medieval Mind and the Renaissance By historian William Manchester. As I read this page,  the ink well myth is used as historical fact: 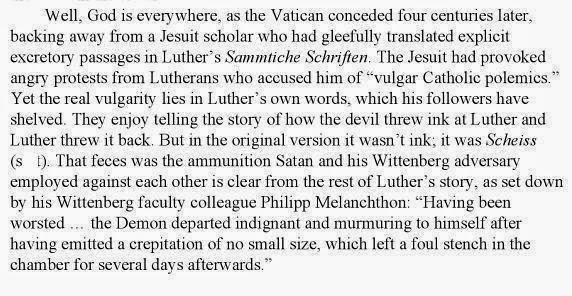 Manchester doesn't document any of this. The phrase "vulgar Catholic polemics" refers to Harnack's charge against the Jesuit Hartmann Grisar's work on Luther in regard to the tower experience (mentioned by Manchester preceding the above quote). Yes, there have been people who've told the ink well story with enjoyment.  Manchester's point though is simply to highlight Luther's use of scatological language. Where Manchester fails is with his the validity he gives to this story.

Melanchthon's Version?
Since Manchester doesn't document his claim, I can only speculate where he took it from. Here are a few other sources below with versions of this tale, from Melanchthon as the alleged source.


Melancthon relates, that there came a monk to Luther's house, and with great violence knocked at the door: the servant opened it, and inquired what he wanted? He asked, if Luther was at home? Luther being informed, bade him come in; for he had not seen a monk of a long time. He told him that he had some papistical errors, about which he desired some conference with him; and propounded some syllogisms, which Luther having solved with ease, he offered others that were not so easily answered. Luther somewhat angry, broke into these words: "You give me a great deal of trouble; for I have other business in hand that I should dispatch." And withal rising from his seat, he shewed the explication of that point which was urged by the monk; and in this conference perceiving that the monk's hands were like the claws of a bird, "Art thou he, then?" said he; "listen to that sentence which is pronounced against thee." And straight Luther shewed him that place in Genesis, The seed of the woman shall break the head of the serpent; and then added," nor shalt thou devour them all." The devil, overcome with this saying, angry, and murmuring to himself, departed, letting a huge fart, the stink of which nasty smell continued in the room for some days after" Wier. de Praestig. Daemon. c. 17. p.54 - (20.) [source].


Melancthon, however, in a very serious strain, gives the following account of a real visit, a visit in which his Satanic majesty condescended to speak, and hold a conference with the reformer. This time he was disguised in a monk's garb. It would appear, first, that he was polite enough to knock at Luther's street door, which, having been opened by a servant, he requested an interview with the master of the house. Luther bade him come in, and inquired his business. He told him that he had some papistical errors, about which he desired some conference with him, and propounded some syllogisms, which Luther having solved with ease, he offered others, which were not so easily solved. Luther, somewhat angry, broke out in these words: " You give mo a great deal of trouble, for I have other business in hand which I should dispatch," and withal rising from his seat, he showed the explication of that point which was urged by the monk; and in this conference perceiving that the monk's hands were like the claws of a bird: "Art thou he, then?" said he; "listen to that sentence which is pronounced against thee;" and straightway Luther showed him that passage in Genesis, "the seed of the woman shall break the head of the serpent," and then added, "nor shalt thou devour them all." The devil, angry at this saying, departed" [source].


The same Melancthon relates that a monk came one day and rapped loudly at the door of Luther's dwelling, asking to speak to him; he entered and said, " I entertained some popish errors upon which I shall be very glad to confer with you." " Speak," said Luther. He at first proposed to him several syllogisms, to which he easily replied; he then proposed others, that were more difficult. Luther, being annoyed, answered him hastily, " Go, you embarrass me; I have something else to do just now besides answering you." However, he rose and replied to his arguments. At the same time, having remarked that the pretended monk had hands like the claws of a bird, ho said to him, "Art not thou he of whom it is said, in Genesis, ' He who shall be born of woman shall break the head of the serpent?'" The demon added, "But thou shalt engulf them all." At these words the confused demon retired angrily and with much fracas; he left the room infested with a very bad smell, which was perceptible for some days[source].


"Jean Wier, or Weyer, was a Belgian physician, who was born in 1515 in Brabant, and died in Westphalia in 1588. He was one of the earliest to recognise the folly of many of the beliefs associated with witchcraft and demonology, and his treatise, " De Praestigiis Dicmonum," published in 1564, is still valued for the evidence it affords of the beliefs of his contemporaries. He holds a position of honour in the history of medicine" [source]. 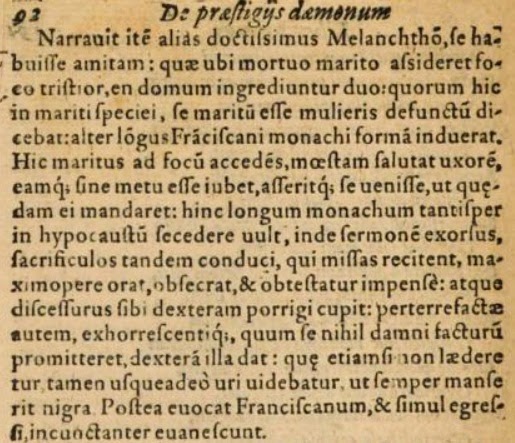 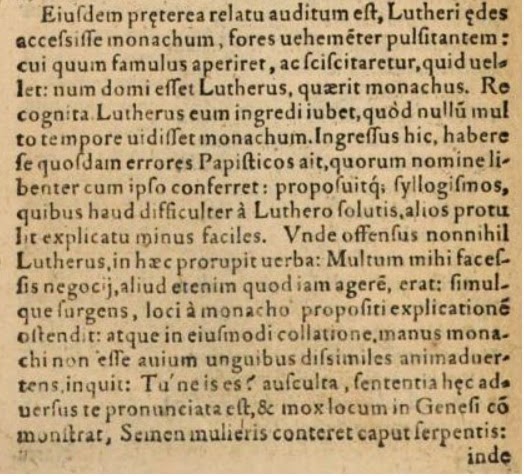 The Devil appeared to MARTIN LUTHER in the form of a monk with bird claw hands, according to an account written by Georgius Godelmannus in 1591. Godelmannus relates that while he was studying law at the University of Wittenberg, Germany, he heard a story from several of his teachers about a monk who appeared and knocked hard upon the door of Luther. He was invited in and began to speak of papist errors and other theological matters. Luther grew impatient and said his time was being wasted, and the monk should consult a Bible for answers. At that point, he noticed that the monk’s hands were like bird claws. Luther showed the monk a passage in Genesis that says, “The seed of the woman shall bruise the head of the serpent.” Exposed, the Devil went into a rage, threw about Luther’s ink and writing materials, and fled, leaving behind him a stench that lasted for days[source].

The 1591 date probably refers to Disputatio de magis, veneficis, et maleficis lamiis. The pages in question can be found here.

Conclusion
From these brief excerpts one can see how the story developed and changed. While Luther did indeed take the existence of Satan quite seriously, the ink well story lacks an authentic pedigree. Historians like William Machester should have known better.
Posted by James Swan at 8:13 PM