Luther from a Jehovah's Witnesses Perspective 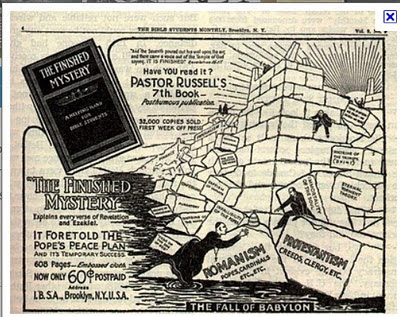 Here's a fascinating tidbit from the CARM boards:


Speaking of Luther, there were some very strong statements about him in the book, The Finished Mystery p.48 (published in 1917 by the WTS), saying he was one of the stars in Jesus' hand (Rev. 3:7) the Messenger to the Church at Philadelphia.

Here's the book in question (published by the Watchtower): The Finshed Mystery (pdf). Check this out:


And the seven stars.—
How each of the Lord's messengers was kept! St. Paul had (supposedly) eight years of liberty after his first imprisonment, planted the Gospel in Spain and revisited the scenes of earlier labors; St. John is said to have been thrown into a caldron of boiling oil, but escaped unharmed and died of old age; Arius died a natural death; as did Peter Waldo, John Wycliffe, Martin Luther and Charles T. Russell, although all had reason to expect martyrdom at the hands of ecclesiasticism.


Here are the comments on Revelation 3-4.


And [to] BY the angel.—
The next messenger to the Church was Martin Luther. "There is considerable similarity between the work begun on Pentecost and that of Luther. The Reformation was, in a sense, the beginning of a new era, a dawning of light where all had been darkness, a new start in the way of Truth."—Z.'16-347. (page 48)

Write.— Luther wrote the first translation of the Bible into German.

These things saith He that is [holy] TRUE.—
The direct reference is to Christ (1 John 5:20);but characteristic of Luther was his great love of truth. When the Papal legate came demanding that he recant, he replied, "I stand by the truth. I will not take it back"

He that is [true] HOLY.— See Mark 1:24.
Luther's special message was "Justification by faith"— real holiness. One of the theses on the door was, "Those who truly repent of their sins have a full remission of guilt and penalty."

He that hath the key of David.—
"All power in Heaven and earth." (Matt. 28:18; Luke 1:32.)Luther's theses were antagonistic to the system actually ruling all over the world. When a representative came warning that his death would surely follow failure to recant, and asking him where he could go when all had orders not to harbor him, he replied, "I will abide under the cope of heaven."

And shutteth and no man [openeth] SHALL OPEN.—
The door of opportunity for the Roman Catholic Church to repent swung shut the day Luther was excommunicated. (Rev.2:21.) "Luther was not in the least disconcerted by this sentence, which he had for some time expected.He renewed his appeal to the general council; declared the pope to be that Antichrist, or Man of Sin whose appearance is foretold in the New Testament; declaimed against his tyranny with greater vehemence than ever; and at last, having assembled the University he cast the canon law,together with the bull of excommunication, into the flames."— Buck.

Revelation 3:8
I know thy works.—
A striking feature of Luther's character was his promptness to do whatever he saw to be the Lord's will. When the great test came, Luther said to Erasmus: "You desire to walk upon eggs without crushing them." Erasmus replied: "I will not be unfaithful to the cause of Christ, at least so far as the Age will permit me." "I will go to Worms," shouted Luther, "though the devils were combined against me as thick as tiles upon the housetops!"

[And] WHICH no man can shut [it].—
"While the Roman pontiff thought everything safe and settled, and all pious and good men were nearly in despair of the religious reformation, so earnestly desired, a certain obscure and inconsiderable monk in Saxony, a province of Germany, suddenly opposed himself singlehanded with incredible resolution to the power of Rome. This was Martin Luther."—Mosheim.

For thou hast a little strength.—
"Compared with the mighty hosts of their enemies, the little band of Reformers had but ‘a little strength;' but they knew that they had the Truth, and they fully trusted the Giver,"—Z. ‘16-847.

LOL - this is as bad as this year's Awake (December 2011) having an article about Bible translations and saying how God used the KJV to help the JWs spread the word from their start in 1914 up till 1961 when they were finally able to come out with their 'perfect' New World Translation.

Just one more example of sola ecclesia, in which leadership formally or effectively claims assured infallibility as if it were Christ, and likewise makes its writings equal to Scripture.

And unlike the latter, such leadership presumes to autocratically explain its historical or prophetic contradictions away.

And the WTS abounds in this as well as false doctrine.

I have noticed that many interpeters of this part of Revelation tend to see these churches as representing an era in church history and projecting their church or a historical figure into the prophecy. This method of "understanding" the prophecy doesn't work, because it is totally dependant on the subjective bias of the interpeter. Indeed, I've seen the cultist HW Armstrong and the Baptist Carroll of "Trail Of Blood" fame claim the same religious groups (Bogomils, Waldenians, etc) as their ancestors in the faith! I think you're better off regarding John's prophecies about these churches as warnings and praises for those congergations and as an admonishment to anyone in any period of church history of how things can turn out.

It's too bad. There were some Jehovah's witnesses at the door today, but they refused to take a 25 cent Luther's catechism I keep handy.

The attribution of the interpretation that Martin Luther was the "messenger" of Rev. 3:7 to that of the Jehovah's Witnesses (as the title of the thread suggests) is a bit misleading. Though the Watchtower Bible & Tract Society (official corporate name) published the book The Finished Mystery, and, of course, Zion's Watchtower (1916.347), the sources of the above interpretation, it would be much more accurate to state that it was Charles Taze Russell's interpretation.

Students of the history of the sect now known as Jehovah's Witnesses (the name not adopted until 1931) know that there was a hostile take over of the WTBS by "Judge" Rutherford, and that once he had solidified his position as the autocratic president of the WTBS, a number of significant doctrinal changes were made. (Followers loyal to Russell's teachings were forced out of the WTBS.) One of those changes was the interpretation of the "seven churches" of the book of Revelation. A full commentary on the book of Revelation written by J. F. Rutherford was published in 1930. In this commentary, Rutherford did away with Russell's 'historical' interpretation of the "seven churches" (i.e. seven church 'ages' from the apostle Paul to Russell), replacing this with an application that begins in 1879; note the following:

"Let chapters two and three of Revelation, then, be carefully studied with the thought in mind that the messages therein contained apply specifically from approximately 1879 until the kingdom of God is in full sway." (Light, 1.17).

I can't seem to recall, were you at one time a JW?

But yes, I am aware of the Russell / JW distinction.

Me: Yes, God ordained for me to be born into a family (my mother at birth, my father joined later) of practicing JW's. My mom was 3rd generation, making me, of course, 4th generation.

Me: Interesting—then why the title for the thread—Jehovah's Witnesses do not adhere to the interpretations you quoted...

Because he's a significant part of JW history, for better or for worse.

I don't claim to be any sort of expert on the JW's, but Russell is their's.