Seven Sacraments, Depending on Which Century 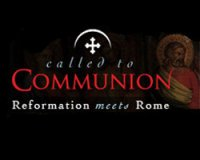 Here's another Called to Communion tidbit:

First, there are not two sacraments “ordained by Christ” but seven sacraments and this can be proved by the Sacred Scriptures alone.

Actually, it depends on which century:

There was no intention during early centuries to limit the number of sacraments to seven. Any ritual that celebrated a divine saving action was considered a mystery or sacrament: feasts days such as Easter and Pentecost, actions such as ritual washing of feet and imposition of blessed ashes, along with the more major ones we would come to know as "the seven." Some lists of sacraments were very short, others had as many as thirty. In the mid-13th century the number was finally set at seven. Other holy rituals came to be called sacramentals. [Greg Dues, Catholic Customs & Traditions (revised edition, 2007) (New London: Twenty-Third Publications, 2007)] pp.145-146].

"Only in the seventeenth century, when Latin influence was at its height, did this list [of seven sacraments] become fixed and definite. Before that date Orthodox writers vary considerably as to the number of sacraments: John of Damascus speaks of two; Dionysius the Areopagite of six; Joasaph, Metropolitan of Ephesus (fifteenth century), of ten; and those Byzantine theologians who in fact speak of seven sacraments differ as to the items which they include in their list. Even today the number seven has no particular dogmatic significance for Orthodox theology, but is used primarily as a convenience in teaching."Timothy Ware, The Orthodox Church (New York: Penguin Books, 1997), p. 275].