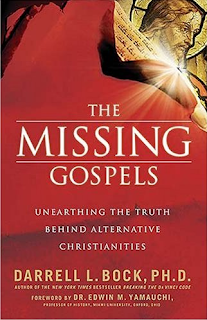 What follows is from Darrell Bock, “The Missing Gospels: Unearthing the Truth Behind Alternative Christianities” Nashville: Thomas Nelson Publishing, ©2006.

In the first part of this treatment of Darrell Bock on “The Bauer Thesis,” I outlined several of Bauer’s important “methodological” contributions. Now I’d like to look at the “content” or substance of what he actually had to say. While Bock believes Bauer had made some methodological contributions, he is much less hopeful that Bauer actually said anything helpful:

1. There were originally varieties of Christianities, not a fixed orthodoxy. Thus, in the beginning there were Christianities, existing side by side with no one option having a superior claim on apostolic roots. He claimed that hard evidence suggested this conclusion. In his regional survey especially at Edessa of ancient Syria (located now in modern Turkey) and Alexandria in Egypt, Bauer argued that what became known as heresy was the [Christian] faith’s original form. Other regions such as Asia Minor and Macedonia give evidence that such heretical views were at least a more prevalent minority than the church sources suggest. So Bauer’s key point is that orthodoxy is a construct of the later church. Between the fourth and sixth centuries a later orthodoxy was projected back into this earlier period. Bauer’s implication is that what Christianity has been and what it originally was are so different that we should rethink (or make over) the faith.

Now, at this point, you may say, “a later orthodoxy projected back into an earlier period! Why, that’s anachronism.” But as I’ve pointed out on a number of occasions, that’s precisely what Roman Catholicism has done: They say: “We think first of developed forms for which we need to find historical justification. The developed forms come first and the historical justification comes second.” And “theologians must always return to the sources of divine revelation: for it belongs to them to point out how the doctrine of the living Teaching Authority is to be found either explicitly or implicitly in the Scriptures and in Tradition.”

It’s really Roman Catholicism that “projects back” its “later orthodoxy” into an earlier period. So Bauer, in coming up with his “thesis,” had a very fine role model, in the Roman Catholic Church. What was David Waltz saying about what ALL liberals have ALWAYS believed?


2. What allowed for the development of orthodoxy was the Roman church’s successful control over other areas in the late second century. Thus, for example Rome threw its weight around in Corinth, even though Corinth had more diversity than orthodoxy. Eventually, Rome won across most of Christendom, so orthodoxy won. Bauer claimed that this victory distorted the earlier history, and subsequent writers, embracing his thesis, formed a new school with its push to reassess this history.

An Assessment of Bauer’s Content Theses
What have critics said about Bauer’s content theses? We start with the second claim.

Did Rome control? Is the orthodox church Rome’s work? Subsequent critique has discredited this thesis. In fact, the German church historian Hans-Dietrich Altendorf (1969, 64) described this feature of Bauer’s work as playing with the argument from silence so that the result was the “constructive fantasy of the author”. Later he spoke of an “elegantly worked-out fiction” to describe Bauer’s view of how Rome directed Corinth.

A closer look at Bauer’s argument helps us. If Rome is the center of orthodoxy, then Bauer must show two things: (1) that orthodoxy really did not exist elsewhere and (d) that Roman communication in 1 Clement (ca. AD 95) to Corinth was not merely an attempt to persuade but was a ruling imposed on Corinth. However, neither of these is the case [references omitted].

On the first point, we know that Antioch and Asia Minor were strongholds for what became orthodox views in this early period. Ephesus was an especially important center as well as Jerusalem, which Bauer completely ignored. There were several key, orthodox locales for the early church besides Rome. But perhaps Rome still threw her weight around.

1. Norris notes that the idea of a city having a single bishop, which some consider integral to Roman power and claims, emerged first in Jerusalem and Syria, not Rome, Ignatius and Polycarp represent the evidence here from Syria, while James oversaw the church in Jerusalem very early on.

2. This same Ignatius can speak of a separation between competing groups that points to a sense of orthodoxy versus heresy. As just noted, Ignatius was not from Rome.

3. Some of the most important witnesses we have of “orthodox” materials come from books written for Asia Minor. This is the locale for the Johannine materials (John’s gospel, his three epistles, and Revelation). Many of Asia Minor’s communities received Paul’s letters. It was a vital center outside of Rome.

4. Marcion developed his system assuming the authority of certain works shared with orthodoxy, especially Luke and the Pauline epistles.

5. The earliest liturgical texts we possess come from Syria.

6. Pliny the Younger wrote to Trajan about a Christian community in Bythnia [an area in the northern part of modern Turkey] that worshipped Jesus, a practice that reflects orthodox belief there.

So early expressions of orthodoxy were not as geographically isolated as Bauer argued. [That is, orthodoxy was evident all throughout the church]. As Turner noted in his critique of Bauer’s ideas, Asia Minor as a region is “less promising” for Bauer’s views than Edessa or Alexandria, which Turner had just finished critiquing at this point in his lecture. After surveying Asia Minor, Turner stated, “nothing here supports the more daring features of Bauer’s reconstruction”

The failure of the idea that Rome was prevalent in influence is important. If Rome did not drive the move to define orthodoxy more precisely in this earliest period, then the sense of orthodoxy may have been more widely distributed than Bauer argued. This may well explain orthodoxy’s “success.” It may be that it was widely distributed because of the nature of its roots, but more on that later.

That there was much contact from other churches with Rome is not surprising, because it was the culture’s dominant city, but this falls far short of ecclesiastical control. In fact, Turner notes occasions when Polycarp and Polycrates opposed efforts by Rome to step into their affairs. In his major study of Rome in the first two centuries, Lampe explained an element of Orthodoxy’s success there. It was simply the majority belief among the many options; it was more attractive to the masses. So one of Bauer’s two content pillars is made of sand (Bock, 50-52).

David Waltz has got it precisely backwards. It is Bauer who posited a strong Roman church that could “enforce orthodoxy”; later scholarship has debunked that notion. Bauer needs a strong and assertive Rome. But Rome was not strong during this period. And Lampe, whose work confirmed a looser authority structure in the Roman church during this period, has helped to kick away one of two pillars of “The Bauer Thesis”.

David Waltz’s refrain has been … that Lampe, and so many other liberal revisionists”, have offered us little more than dubious theories filled with gaping holes… Darrell Bock, for one, thinks Lampe has been on the corrective side, filling in some of the gaping holes.

This is going to be my last response to David Waltz at Beggars All. My hope is to continue to flesh out my response to him at my Reformation500 blog, where I hope to continue to respond to his charges, and to include an in-depth treatment of Lampe’s work, and also to respond to some of the other works to which David referred. In coming weeks, Lord willing, I hope to pick up where I left off with the topic of “Apostolic Succession,” and I want to jump into the Carl Trueman fray.
Posted by John Bugay at 7:22 AM

MzEllen, fortunately, you can get this one fairly inexpensively :-)

Hi Truth; this is why I keep calling David Waltz "simplistic" and even "nonsensical".