Luther: Of very little worth is the Book of Baruch, whoever the worthy Baruch might be

The following is from the web page Luther, Exposing the Myth, under the heading "Sacred Scripture":

Luther Exposing the Myth says their stated purpose is to show that "from Luther’s own words we shall see him for what he really was, that is a rebellious apostate, who abandoned the faith and led many into apostasy from God under the guise of “reformation” in order to follow his perverse inclinations." With this quote, they attempt to show Christ taught no one should add to or take away anything from scripture (Rev. 22:18-19), while Luther devalued the book of Baruch, violating the words of Christ.

Documentation
Luther, Exposing the Myth cites "The Facts About Luther, O'Hare, TAN Books, 1987, p. 202." This book was written by Father Patrick O'Hare , not in 1987 (that's the reprint), but in the early 1900's, during the tail end of the period of Roman Catholic destructive criticism in regard to Luther (for an overview of this period, see this link; for O'Hare specifically, see this link). On pages 201-202 of the TAN reprint, O'Hare states,


Luther translated and altered the Sacred Word by the freedom of his opinions. His irreverent work did not stop here. As he rejected the authority of the teaching Church, he had no guide but his own whim and took upon himself to expunge from the canon of Inspired Writings those of the Old Testament, known as deuterocanonical books, although they had always been received by the Oriental churches and especially by those who occupied the Holy Land, and who, consequently, had preserved the books continuously. In his prefaces to these books he gives at length his opinion as to their character and authority. The result was that they were published as "Apocrypha," or books profitable for pious reading, but no part of the Sacred Text, because not inspired by the Holy Ghost. The catalogue in the edition of 1534 gives as "Apocrypha," Judith, Wisdom, Tobias, Ecclesiasticus, the two books of Maccabees, parts of Esther, parts of Daniel and the prayer of Manasses.

But even for the books he chose to retain, he showed little or no respect. Here are some examples of his judgments on them. Of the Pentateuch he says: "We have no wish either to see or hear Moses." "Judith is a good, serious, brave tragedy." "Tobias is an elegant, pleasing, godly comedy." "Ecclesiasticus is a profitable book for an ordinary man." "Of very little worth is the book of Baruch, whoever the worthy Baruch may be" [source].

O'Hare doesn't mention where he got these quotes, but they did circulate in a number of books during his lifetime: The Apocrypha of the Old Testament: with historical introductions, A commentary on the Holy Scriptures: critical, doctrinal,Volume 15, The Bible in the Church,  Protestantism and the Bible, etc. Of all these, Westcott's book  (1864) provides an extended citation and documentation:


Luther on his side found in the Bible something which had long been hidden from the world, not as to its doctrine only, but as to its general relation to God and men. The study of the Bible was a life-long passion with him. ' Were I but a great poet,' he said, ' I would write a magnificent poem on the utility and efficacy of the Divine word.' His judgment on the different Books is given in detail in his Prefaces. These are so full of life, and so characteristic of the man, that they can never lose their interest; and as a whole they form an important chapter of the history of the Bible. It will be sufficient to quote fragments from his remarks on the controverted books of His judgment the Old and New Testaments.


'Of very little worth is the Book of Baruch, Baruch. whoever the worthy Baruch may be...So that I had very nearly excluded it with 3 and 4 Ezra (1, 2 Esdras) from my translation. For these two books we would not translate, because they have nothing in them which you might not find better in Aesop...However, we have admitted Baruch, because he writes so strongly against idolatry, and maintains the Law of Moses.'

Wescott says, "His judgment on the different Books is given in detail in his Prefaces," and he also mentions "Werke, ed. Walch XIV, p. 98." Here is page 98 of Walch XIV. The text in question states, 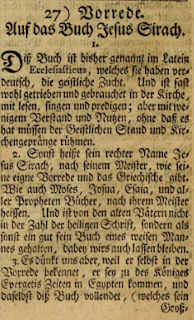 Luther's "judgment on the different Books is given in detail in his Prefaces" has been translated into English.   Luther's comments on Baruch can be found at LW 35:349.


Preface to the Book of Baruch 1534﻿
Whoever the good Baruch may be, this book is very skimpy. It is hardly credible that the servant of St. Jeremiah, whose name is also Baruch﻿﻿ (and to whom this letter is attributed), should not be richer and loftier in spirit than this Baruch. Furthermore, the book’s chronology does not agree with the [accepted] histories.﻿ Thus I very nearly let it go with the third and fourth books of Esdras,﻿﻿ books which we did not wish to translate into German because they contain nothing that one could not find better in Aesop﻿ or in still slighter works. As to the Fourth Book of Esdras, St. Jerome says it contains vain fancies;﻿ nor did Lyra﻿﻿ want to comment on it. Besides, it does not exist in Greek.﻿ Whoever is so inclined may and should translate them; only let him not include them among these [recognized] books. [LW 35:349]


Conclusion
Here Luther is echoing Jerome, who likewise rejected the canonicty of Baruch. F.F. Bruce points out, "In this prologue to Jeremiah, Jerome points out that he has not included the book of Baruch in his version of the major prophet because it is neither read nor recognized among the Hebrews; he is prepared for the abuse that will be heaped on his failure to acknowledge it." [Bruce, The Canon of Scripture [Downers Grove: Inter-Varsity Press, 1988) p. 92]. Roger Beckwith notes as well:


The Book of Baruch probably originated as a piece of edifying haggadah, suggested by Jer. 51:59–64 and embodying little except biblical teaching, and that consequently it did not intend to make any claim to be a fresh revelation... its character was well understood by those who translated it into Greek and appended it to Jeremiah, in which form it is quoted by the Greek and Latin Fathers as simply part of Jeremiah: even Fathers like Cyril of Jerusalem and Athanasius, who carefully exclude from their lists books not accepted by the Jews, include Baruch as an appendix to Jeremiah, presumably because it was not considered as an independent work.﻿ This is consistent with one of the views about Baruch the scribe which was current among the rabbis, namely, that unlike other disciples of prophets, such as Elisha the disciple of Elijah, he was not a prophet himself (Mekilta, Pisha 1) [Beckwith, R. T., The Old Testament canon of the New Testament Church and its background in early Judaism (London: SPCK, 1985) p. 380].

Some Protestants might be surprised to learn that Luther translated the Apocrypha, and included it his translation of the Bible. The editors of Luther’s Works explain, “In keeping with early Christian tradition, Luther also included the Apocrypha of the Old Testament. Sorting them out of the canonical books, he appended them at the end of the Old Testament with the caption, ‘These books are not held equal to the Scriptures, but are useful and good to read.’﻿ ” Luther actually followed this, and cited from Baruch throughout his career:

In these references, Baruch indeed is cited in a "useful" way. The references to Baruch are mixed in with references to canonical scripture, because as Luther states, "Baruch, however, we shall let run with the pack because he writes so vigorously against idolatry and sets forth the law of Moses."
Posted by James Swan at 6:05 AM

Labels: Apocrypha, Luther and the Canon, Luther Exposing the Myth, Patrick O'Hare, The Facts About Luther