The following is from the web page Luther, Exposing the Myth, under the heading "On Reason":

Luther Exposing the Myth says their stated purpose is to show that "from Luther’s own words we shall see him for what he really was, that is a rebellious apostate, who abandoned the faith and led many into apostasy from God under the guise of “reformation” in order to follow his perverse inclinations." With this quote, they attempt to show Christ exhorted his hearers to use reason, while Luther did the opposite. For Luther Exposing the Myth, Christ exhorts his hearers to "be wise" [Matt. 10:16], while Luther says "reason" should be killed and buried. This quote highlights Luther's denigration of human "reason" (a similar quote was discussed here). 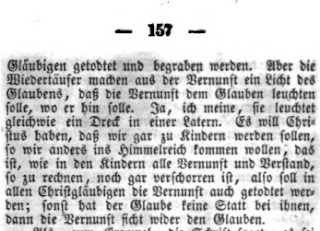 Jean (Johannes) Janssen's L’Allemagne et la Reforme VII:427 can be found here. There is a discussion of Luther's view of reason, but the quote under scrutiny is not presented (an English translation of page 427 can be found here).  The quote was probably taken from Maritain's book, as Maritain cites Erlangen 44 as his source when citing this Luther quote.

This Luther quote is located in WA 47:328. It's from Luther's Sermon on Matthew 19:13-15. Luther preached through Matthew 18-24 during the years 1537-1540. Technically, Luther did not write this sermon. The text is based on the notes of Georg Rörer who heard Luther preach the sermon.  This sermon is also available in English, translated in LW 68. The quote can be found  in LW 68:22-23. There is also an English translation of the pertinent context of this quote presented by Ewald Plass, What Luther Says Volume 1 (St. Louis: Concordia Publishing House, 1959), p. 485-486 (entry 1440).

In this sermon, Luther expounds on Christ's ascribing the kingdom of heaven to children against Anabaptism. The context is quite revealing as to what Luther means.

Again, they argue: How can children believe, seeing that as yet they have no reasoning power? Thus they add reason to faith. To this Christ answers: This is exactly why children can believe better.They cannot reason. For reason is directly opposed to faith. This is why you must let reason go. It must be killed and buried in believers. But the Anabaptists turn reason into a light of faith so that reason may serve faith as a guiding light. I hold that it does shine forth as smudge in a lantern. Christ wants us to turn into veritable children if we desire to come into the kingdom of heaven. He means that, as all reasoning is, so to speak, still buried in children, so reason is also to be killed in all Christian believers. Otherwise faith has no place in them. For reason opposes faith.

For instance, Scripture says that there is only one God, but that in this one, divine Essence there are three distinct Persons:God the Father, God the Son, God the Holy Ghost. However, these are one Essence and Substance. Now the Turk presently comes with his reason and asks how it is possible for one to be three and three one. Moreover, say they, in a house there must be no more than one lord and host; just so there must be only one God in heaven. — All this is the language of reason. But in this matter you Christian must become a child and say: Indeed, I cannot comprehend this doctrine; but I must become a child,must let myself be carried, touched, and blessed by Christ, and I must believe it. I must close the eyes of reason and not determine how this is possible or impossible; but I must believe and accept the pure, simple Word. The same thing is true of all other articles of faith. When heathen hear that God's natural Son became man, they say: That is impossible. — No doubt it is if reason is asked for advice. But you must let go of reason in this matter, must pay no attention to it,must entirely kill it; otherwise you will not come into the kingdom of heaven. One cannot grasp or comprehend this matter by reason. You must believe the article that Christ was born man in the fullness of time. You must permit yourself to be carried and led to Christ by the divine Word. Then you will partake of the kingdom of heaven. You must become children. This is the place for little children. Little children Christ carries, fondles, embraces, blesses,and says: Of such is the kingdom of heaven. If, then, I permit myself to be carried, Christ gives me His works and His merit and the kingdom of heaven.

The Turk says the same thing about the Lord's Supper: that mere bread and wine are present in it; and, again, that in Baptism there is simple water, such as is poured over the hand. Really now, says he, should this be called a "washing of regeneration,"as is written in the third chapter of the Letter to Titus? —The matter is ridiculous to them; for one can hardly wash a spoon clean with this water. How, then, is one to bathe body and soul with it? Reason cannot comprehend the articles of faith, including the doctrine of the Sacrament of Baptism and the Lord's Supper. Therefore the order is: You must become a child and say: I do not understand this. I do indeed see nothing but water and how it is being poured over a little child. But I will gladly be a fool and a child, and I will believe Him when He says that, through the Word, Baptism has the power and might of regeneration and forgiveness of sins [What Luther Says, 1:485-486 (entry 1440)].

Conclusion
Luther actually is arguing for a doctrine Luther Exposing the Myth would adhere to (infant baptism). The reason why Luther saw "reason" as directly opposed to faith is because it deems the things of God to be absurd nonsense. In a traditional concept of faith, faith is put into something that we can empirically or rationally verify. Luther held that by looking at the God of the Bible, one comes to know a “weak and foolish God,” since this God is not known by wisdom and signs (or by a process we can control). The God of the Bible reveals himself in what “reason” would think is foolishness: God is found in a crib, and on a cross.
Luther though, must not be seen as rejecting human reason. He did teach that God had fashioned His human creatures so we could learn a great deal about Him through empirical ways of learning, but reason was always to play the role of a servant. Hence, when one reads strong statements by Luther against reason, one must keep in mind that Luther valued reason, but it must be the handmaid to theology. It must be the servant. It is not that Luther didn’t understand the use of “reason,” it is simply the fact that “reason” must be kept in its place in theological matters.

Addendum (2016)
This blog entry is a revision of an entry I posted back in 2010. The original can be found here. Because so many sources are now available online, I'm revising older entries by adding additional materials and commentary, and also fixing or deleting dead hyperlinks. Nothing of any significant substance has changed in this entry from that presented in the former.
Posted by James Swan at 12:23 PM