Here's an interesting comparison having to do with R.C. Sproul's assertion that the canon is a fallible collection of infallible books. Steve Ray says Sproul has a weak position, Beckwith says it's a coherent position. 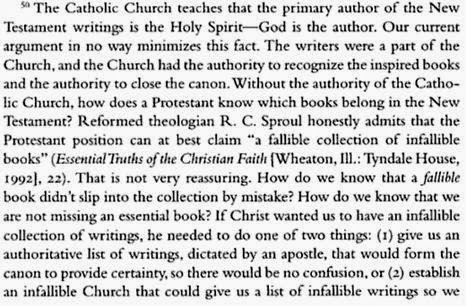 I know R. C. Sproul admits that the classic Protestant position is that we only have a “fallible collection of infallible books”. I would never have admitted to that three years ago. I would have (and I think you would have to) fought to the death on that one. A fallible collection is not very assuring. If I was still an Evangelical and had to struggle over Sproul’s statement, I think, like others, I would have seriously been pushed toward agnosticism. [source]

Francis Beckwith, from his book, Return to Rome page 142, footnoting his statement on page 123, "because the list of canonical books is itself not found in scripture- as one can find the Ten Commandments or the names of Christ's Apostles- any such list, whether Protestant or Catholic, would be an item of extra-biblical theological knowledge" :

Reformed theologian R. C. Sproul seems to concede as much: “Roman Catholics view the canon as an infallible collection of infallible books. Protestants view it as a fallible collection of infallible books. Rome believes the church was infallible when it determined which books belong in the New Testament. Protestants believe the church acted rightly and accurately in this process, but not infallibly.” (R.C. Sproul, What is Reformed Theology?: Understanding the Basics [Grand Rapids, MI: Baker Books, 2005], 54). It seems that Sproul is claiming that the ecclesiastical body that determined (or discovered) the canon was not infallible but that its list of canonical books is in fact right and accurate (and by implication “inerrant”). That is a coherent position. For example,I am fallible, but I am able to issue inerrant statements, such as, “It is the case that I am fallible,” “2 + 2 = 4,” “The United States is in North America,” and “All bachelors are unmarried males.

Beckwith is correct- Sproul's position is coherent, and actually reflects the Old Testament church, so why not the New Testament church as well? As to Mr. Ray's comments, simply because fallible people discover the canon, this doesn't mean that God's providence in revealing his Word to humanity isn't perfect. God can still perfectly reveal his word through fallible beings.

For more on this topic, see my earlier blog entry: Sproul: "The Bible is a fallible collection of infallible books."
Posted by James Swan at 3:18 PM

That's funny. I have never considered looking at Sproul's argument the way Beckwith does. That's a very good way of defending that argument. Thanks for another edifying post. You Luther worshiping heretic, you.

Andrew, you crack me up! James is a "Luther worshiping heretic"! That's great.

Beckwith misses a distinction. If I want to be sure X is true then quoting a fallible source does not help me. He can say I am fallible and 2+2=4. But he has another reason for believing 2+2=4 is true. He is not basing his belief in the truth of 2+2=4 on his own authority so his fallibility is beside the point.

Sproul is saying there is no infallible authority on which to base the NT canon. Not even a pseudo-infallible authority. You have long and strong tradition but protestants hold that long and strong tradition can and has erred. If all Christendom can be so wrong for so long about the Eucharist, about the papacy, about justification, and on and on then why can't they be wrong about the canon?

If you want to actually seriously interact with the canon question try responding to this:

I think it is a serious attempt to critique the reformed position on the canon. It deserves a serious reply from a reformed thinker. So far it has not happened.

Randy wrote:
"Sproul is saying there is no infallible authority on which to base the NT canon."

Not exactly, [ I think ] he is saying there no other infallible human authority (church, councils, priests, bishops, etc.) outside of the only infallible authority itself, the Scriptures; and the voice of the Holy Spirit that speaks from the Scriptures, which guided the church and gave discernment so that the canon is correct. "Canon" or standard/criterion/rule/law/principle is a result of inspiration; if it is inspired (Theopneustos -θεόπνευστος - 2 Timothy 3:16-17), then it is canon. The NT books were individual scrolls written to different places. Difficulty in travel and copying and the persecution was the reality that caused some time for all the churches everywhere to have the time to sift and think and weigh and discern which books were definitely inspired and which ones were not. Protestants can believe that God guided the early church of that day on the canon of Scripture and the doctrine of the Trinity, without ascribing to Papal or church infallibility.

Furthermore, I tried hard to interact with them at Called to communion from comboxes 6-123, as I recall. Other Evangelicals contributed, but the CTC folks don't seem to accept any argument that deals with their argument. They say, "you are not on topic" or some kind of philosophical Latin answer; many times. It is almost like they are "Pope" in everything and almost have an attitude of "whatever we say goes"; for example, "you cannot mention Mary or the Papacy when discussing this issue with us".

They demand to separate Mary and Papacy and Eucharist into separate issues, but they cannot be separated from this issue, because the RCC is claiming to be "God Himself" almost, by their infallibility claim. Only God and His word are infallible.