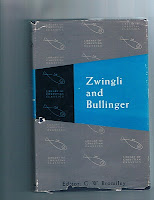 Ulrich Zwingli doesn't get as much coverage as some of his contemporaries. He wasn't as brilliant a writer as Luther, nor as great a theologian as Calvin. Up until the advent of Google books, it was actually difficult to track down a lot of Zwingli's writings. I had tracked down one or two books of small collections (in fact the book pictured is my copy), and even after reading them, I was never all that inspired to post or write much about anything he had written .

But, now with more of his writings available to the general public, here's what pops up:

"In this matter of baptism - if I may be pardoned for saying it- I can only conclude that all the doctors have been in error from the time of the apostles.”

Well, of course Luther said far worse about Zwingli, but I find it interesting that the particular gentleman who stated this is always ranting about Luther's alleged denial of good works or pursuit of holiness. In the same comment this Roman Catholic notes that Protestants use "slander, swill, sophistry and swinishness" so as to be faithful to Luther, and then a few lines later he calls Zwingli an idiot. So, whom is it exactly that isn't pursuing good works and holiness by using slander, swill, sophistry and swinishness?

As to Zwingli's statement, note the caution in which he uttered his statement:

In this matter of baptism—if I may be pardoned for saying it- I can only conclude that all the doctors have been in error from the time of the apostles. This is a serious and weighty assertion, and I make it with such reluctance that had I not been compelled to do so by contentious spirits I would have preferred to keep silence and simply to teach the truth. But it will be seen that the assertion is a true one: for all the doctors have ascribed to the water a power which it does not have and the holy apostles did not teach. They have also misunderstood the saying of Christ about water and the Holy Ghost in John 3. Our present task is to see what baptism really is. At many points we shall have to tread a different path from that taken either by ancient or more modern writers or by our own contemporaries. We shall be guided not by our own caprice but by the Word of God.

Now before one deems Zwingli an idiot 500 years later, shouldn't respect for history and pursuit of charity and personal holiness motivate a Roman Catholic to at least note Zwingli's caution and then explore his reasoning on the issue? Here's where he should've began- the very next paragraph-

When he took upon himself the curse of the Law, Jesus Christ, the very Son of God, deprived us of all external justification. Therefore no external thing can make us pure or righteous. That means that everything ceremonial, all outward pomp and circumstance, is now abolished, as Paul says in Hebrews 9: "This figure was for the time then present, in which were offered both gifts and sacrifices that could not make him that did the service perfect as pertaining to the conscience; which stood only in meats and drinks, and divers washing, and carnal ordinances, imposed on them until the time of reformation" etc. This reformation was accomplished by Christ, as we see in the following passage: but it would take too long to speak of that now. These verses tell us, however, that Christ abolished external things, so that we are not to hope in them or to look to them for justification. Certainly we are not to ascribe cleansing to the external things which are still left For if in the Old Testament they were only carnal and outward, not being able to cleanse us or to give us peace or to assure the conscience, how much less are they able to accomplish anything in Christ, in whom it is the Spirit alone that quickeneth.

Before treating of baptism we must first indicate the meaning of the word sacrament. In our native tongue the word suggests something that has power to take away sin and to make us holy. (7) But this is a serious perversion. For only Jesus Christ and no external thing can take away the sins of us Christians and make us holy. And as a result of this misunderstanding there are some who cry out: "They are depriving us of the holy sacraments whereby our poor souls are comforted." But we have no desire to take away the sacraments but simply to use them rightly and not to pervert them. And they are perverted by those who ascribe to them a virtue which they do not possess. As used in this context the word sacrament means a covenant sign or pledge. If a man sews on a white cross, he proclaims that he is a Confederate. (8) And if he makes the pilgrimage to Nahenfels and gives God praise and thanksgiving for the victory vouchsafed to our forefathers, (g) he testifies that he is a Confederate indeed. Similarly the man who receives the mark of baptism is the one who is resolved to hear what God says to him, to learn the divine precepts and to live his life in accordance with them. And the man who in the remembrance or Supper gives thanks to God in the congregation testifies to the fact that from the very heart he rejoices in the death of Christ and thanks him for it. Of those who complain I ask only this: that they let the sacraments be real sacraments and do not describe them, as signs which actually are the things which they signify. For if they are the things which they signify they are no longer signs: for sign and thing signified cannot be the same thing.(10) Sacramenta—as even the papists maintain—are simply the signs of holy things. Baptism is a sign which pledges us to the Lord Jesus Christ. The remembrance shows us that Chris suffered death for our sake. Of these holy things they are the signs and pledges. You will find ample proof of this if you consider the pledge of circumcision and the thanksgiving of the paschal lamb.
Posted by James Swan at 11:30 AM