Luther: We Germans are now the...shame of all the countries

From various web-pages, I've come across Rome's defenders using this quote three different ways. First, it was used as an example of "The Agony of Luther" over "the State of Early Protestantism."


But did not the father of the new movement himself acknowledge that "our (people) are now seven times worse than they ever were before. We steal, lie, cheat, cram, and swill and commit all manner of vices"(Er. 36, 411).  "We Germans are now the laughing-stock and the shame of all the countries, they hold us as shameful, nasty swine."(Erl. 8, 295)" The same one that said this regrets to have been born a German, to have written and spoken German, and longs to fly from there, that he may not witness God's judgment breaking over Germany." (Erl. 20, 43)

I used black lettering to highlight how Rome's defender edited down this sentence from Denifle. Why Rome's defenders cited this quote (leaving out particular words in a short sentence) is anyone's guess. The point appears to be that Germans=Protestants, and their behavior was so immoral, that the rest of the world looked on them as shameful. Of course, without a context, this quote means... whatever someone wants it to mean. Denifle doesn't do much better.

Denifle cites "Erl. 8, 295." This would be the eighth volume of the Erlangen edition of Luther's Works, Page 295 states: 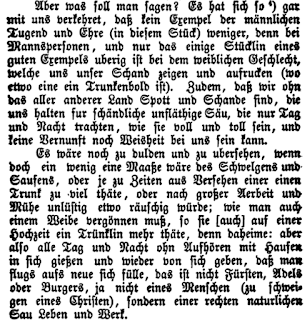 The text of Erl 8 is in German, based on Aurifaber's printed version (published sometime after 1542). The more complete and pure text of this sermon is a compilation found in WA 47: 757-772. WA 47 provides three simultaneous texts ("Rörer’s transcript, Stoltz’s transcript, and the printed version which is Aurifaber’s based on Rörer’s notes" (LW 51:291). LW relied on Rörer's version (referencing the other two when necessary) from WA 47 when it translated this sermon into English ( LW 51:289-299). The sermon was entitled "Sermon on Soberness and Moderation against Gluttony and Drunkenness, 1 Peter 4:7-11, May 18, 1539." As is typical of many of Luther's sermons, he did not write the text. The text is based on notes of those who heard Luther preach the sermon.

Context
The title of the sermon says it all: "Sermon on Soberness and Moderation against Gluttony and Drunkenness." Luther preached a powerful sermon against drunkenness and gluttony. Luther begins the sermon by addressing the popular caricature of his day: the Germans were known as drunkards. Luther states:


This gluttony and swilling is inundating us like an ocean and among the Spaniards, Italians, and English it is reprehended. We are the laughingstock of all other countries, who look upon us as filthy pigs; and not only upon private persons, but upon nobles and princes also, as if that were the reason why they bear the coat of arms. We would not forbid this; it is possible to tolerate a little elevation, when a man takes a drink or two too much after working hard and when he is feeling low. This must be called a frolic. But to sit day and night, pouring it in and pouring it out again, is piggish. This is not a human way of living, not to say Christian, but rather a pig’s life.

What, therefore, shall we do? The secular government does not forbid it, the princes do nothing about it, and the rulers in the cities do nothing at all but wink at it and do the same themselves. We preach and the Holy Scriptures teach us otherwise; but you want to evade what is taught. Eating and drinking are not forbidden, but rather all food is a matter of freedom, even a modest drink for one’s pleasure. If you do not wish to conduct yourself this way, if you are going to go beyond this and be a born pig and guzzle beer and wine, then, if this cannot be stopped by the rulers, you must know that you cannot be saved. For God will not admit such piggish drinkers into the kingdom of heaven [cf. Gal. 5:19–21]. It is no wonder that all of you are beggars. How much money might not be saved! Twenty years ago this was considered among the princes to be a shameful vice. If we do not watch out, it will become common among virgins and women. Therefore I am utterly terrified by that word of the Lord concerning gluttony: [“Take heed to yourselves lest your hearts be weighed down with dissipation and drunkenness and cares of this life, and that day come upon you suddenly like a snare” (Luke 21:34)].

Listen to the Word of God, which says, “Keep sane and sober,” that it may not be said to you in vain. You must not be pigs; neither do such belong among Christians. So also in I Cor. 6 [:9–10]: No drunkard, whoremonger, or adulterer can be saved. Do not think that you are saved if you are a drunken pig day and night. This is a great sin, and everybody should know that this is such a great iniquity, that it makes you guilty and excludes you from eternal life. Everybody should know that such a sin is contrary to his baptism and hinders his faith and his salvation.

Therefore, if you wish to be a Christian, take care that you control yourself. If you do not wish to be saved, go ahead and steal, rob, profiteer as long as you can, but fear Jack Ketch and the magistrates. But if you do want to be saved, then listen to this: just as adultery and idolatry close up heaven, so does gluttony; for Christ says very clearly: Take heed “lest your hearts be weighed down with dissipation and drunkenness and cares of this life, and that day come upon you suddenly” [Luke 21:34], “as the lightning comes from the east and shines as far as the west” [Matt. 24:27]. Therefore be watchful and sober. That is what is preached to us, who want to be Christians. (LW 51:292-294)


Conclusion
Luther then goes on to preach moderation with food and drink. Is Luther agonizing over the state of early Protestantism? No. He's preaching a sermon to his fellow German people on a very common topic.

One of the ironies of the quote in question is that it is from a sermon about moderation when it comes to alcohol. One of Denifle's gripes against Luther is that he was a drunkard (see Denifle's discussion starting at the bottom of page 109. When Denifle used the quote in question, he left ouf the fact of the sermon it came from.  The historical record nowhere documents Luther ever being drunk. It does provide evidence that he did drink alcohol, and that he enjoyed drinking. One needs only to survey the massive output of work (both written and physical) that Luther produced. Had he been the alcoholic Denifle paints him to be, it is curious how he accomplished so much.


Addendum (2016)
This blog entry is a revision of an entry I posted back in 2010. The original can be found here. Because so many sources are now available online, I'm revising older entries by adding additional materials and commentary, and also fixing or deleting dead hyperlinks. Nothing of any significant substance has changed in this entry from that presented in the former.
Posted by James Swan at 12:37 AM