Knowing Where the Fight Is on Indulgences & the 95 Theses 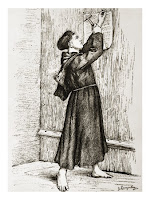 Here's an odd one from the CARM boards in which a Reformed person fell off the truth wagon. A minor discussion about the 95 Theses came up, and a Roman Catholic rightly pointed out the Theses were against the abuse of the indulgence, not the concept of the indulgence. A rather zealous Reformed person took issue with this basic fact saying the entire thing was "a diatribe against indulgences" and then went on to get himself edited by some unpleasant comments.

The 95 Theses does not deny the validity of the indulgence. Rather, Luther attacked and exposed the abuse of the sale of indulgences. Luther was troubled that those he was ministering to were ignoring the good works he was directing them towards, but rather were purchasing indulgences as a means of satisfaction. They were also being purchased to alleviate suffering of those in Purgatory.

Thesis 71 says: Let him be anathema and accursed who denies the apostolic character of the indulgences.

Luther is arguing the indulgence idea that satisfaction can be reduced by an action of the church is valid. Luther shows he is only attacking the abuse of penance and the indulgence.

As Reformed Christians, we're not giving anything away by admitting Luther still had a way to go after he posted the 95 Theses. In fact, he still clung on to purgatory even while debating Eck at Leipzig. He even clung on to praying to Mary and the saints for a while.

Toward the end of his life, Luther says

"So you will find how much and what important matters I humbly conceded to the pope in my earlier writings, which I later and now hold and execrate as the worst blasphemies and abomination. You will, therefore, sincere reader, ascribe this error, or, as they slander, contradiction﻿ to the time and my inexperience. At first I was all alone and certainly very inept and unskilled in conducting such great affairs. For I got into these turmoils by accident and not by will or intention. I call upon God himself as witness." [LW 34: 327-328].

So, there’s no need to have a big battle over the extent of challenge to the papacy in the 95 Theses. Within the 95 Theses, there is nothing distinctly Lutheran or protestant. There is no discussion of Justification by faith alone through grace alone or sola scriptura.

The points he did make were enough to get the ball rolling. For instance:

Thesis 1: When the Lord calls us to repent, he meant the entire life of a believer is one of penance.

Thesis 2: Matthew 4:17 means “repent”, not “do penance”. This verse does not refer to the sacrament of penance

Thesis 3: Repentance is both internal and external. Luther not attacking the sacrament of penance or the institution of indulgences, but the gross abuse of the indulgence.

Thesis 6: The pope cannot remit guilt, but only declare it has been remitted by God. The pope’s power is limited. He does not remit guilt, he administers the remittance.

Thesis 8: The cannons of penance only apply to the living, not the dead. This is an abuse of the sacrament of penance. Luther is attacking a papal policy only 50 years old.

Thesis 27: There is no “springing from purgatory” when the indulgence is paid (against Tetzel, and the paying of a general indulgence.)

Thesis 32: All those who believe in eternal security because of letters of indulgence are eternally damned with their teachers. (The church never taught this, but Luther sees this implication drawn by common people)

Thesis 81-82: The papacy is brought into disrepute by the sale of indulgences. The papacy has become hard to defend.

Thesis 82: Luther asks, “Why doesn’t the pope just let everyone out of purgatory by an act of love, rather than redeeming souls for money to build a church?”

Luther came to realize that the entire system of indulgences was non-biblical and non-Christian. For the perfect work of Christ requires no indulgence. Luther said, “The indulgences are not a pious fraud, but an infernal, diabolical, antichristian fraud, larceny, and robbery, whereby the Roman Nimrod and teacher of sin peddles sin and hell to the whole world and sucks and entices away everybody’s money as the price of this unspeakable harm.”

"For if Abraham was justified by works, he has something of which to boast, but not before God. For what does the Scripture say? “Abraham believed God, and it was accounted to him for righteousness.” Now to him who works, the wages are not counted as grace but as debt. But to him who does not work but believes on Him who justifies the ungodly, his faith is accounted for righteousness, just as David also describes the blessedness of the man to whom God imputes righteousness apart from works: “Blessed are those whose lawless deeds are forgiven, and whose sins are covered; blessed is the man to whom the LORD shall not impute sin.”