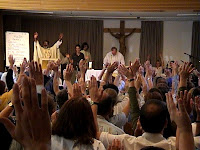 This type of stuff is always a head shaking irony.

Catholics often argue that using Scripture alone as an infallible authority produces doctrinal anarchy. In its place, their paradigm of Scripture + Tradition + Magisterium = doctrinal unity. Especially clear is the Eucharist... Priests have that one down, they're all marching in unison to the beat of the drum.

Note the following question and answer from the Catholic Answers "Ask an Apologist" board:

Question:
Is the Real Presence of Jesus in the sacrament separated from faith of the one who is receiving communion or is it dependent on his/her faith. A Priest I go to for mentoring has told me that the intention of Christ was to share himself fully but he is not truly present unless I (or the one who is receiving the communion is united with that intention) To prove his point he shared a fictional story about an Old Lady who received communion at home, this old lady had a Bird and while the priest was giving her the host the bird took it and ate it and he asked me, did the Bird have communion, was it really Christ in there. I had to admit that it was a valid point but I couldn't support it with any church documents. Please Advise.

Answer:
Dear friend,You need to find another mentor. What your priest is telling you is heresy! That story about the bird does not force anyone to admit that the host ceases to be the body of Christ if an animal receives it.

But well, at least Catholics don't have all those wacky problems Protestants do with Church services with communion... or do they? Here's an MP3 clip of Tim Staples explaining why it's wrong (in his opinion) to clap during mass. He then goes on to explain why he left a particular Catholic Church he attended because the priest had his congregation do "the wave."
Posted by James Swan at 1:13 AM