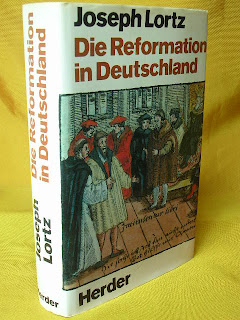 A few years back I had an interesting exchange with Catholic apologist Dr. Art Sippo.


When I recommended the works of Catholic historian Joseph Lortz on Luther, and pointed out that Lortz was pivotal to the change in Catholic scholarship toward Luther, Dr. Sippo stated:


"[Catholic historian joseph Lortz] was a Nazi just like Adolph Hitler. Both of them were Luther fans."

"You know, come to think of it, If Mr. Swan rally thinks that being a Nazi doesn't disqualify Fr. Lortz as a Luther expert, why doesn't he go right to the top and advocate the opinions of Adolph Hitler himself!"

"Mr. Swan wants us to believe that a man like Fr. Lortz who held to these "lofty ideals" can be trusted to interpret Luther correctly! Frankly, I would be embarrassed to be associated with him."

Well, if Dr. Sippo won't listen to me, perhaps he'll listen to his Pope:

Question: Where does Luther scholarship stand today? Have there been any attempts to research Luther's theology, beyond existing historical investigations?

Cardinal Ratzinger: Nobody can answer this question in a few sentences. Besides, it would require a special kind of knowledge which I do not possess. It might be helpful, however, briefly to mention a few names which represent the various stages and trends of Catholic Luther scholarship. At the beginning of the century we have the decidedly polemical work by the Dominican H. Denifle. He was responsible for placing Luther in the context of the Scholastic tradition, which Denifle knew better than anybody else because of his intimate knowledge of the manuscript materials. He is followed by the much more conciliatory Jesuit, Grisar, who, to be sure, encountered various criticisms because of the psychological patterns in which he sought to explain the problem of Luther. J. Lortz from Luxembourg became the father of modern Catholic Luther scholarship. He is still considered the turning-point in the struggle for an historically truthful and theologically adequate image of Luther. Against the background of the theological movement between the two world wars, Lortz could develop new ways of questioning which, subsequently, would lead to a new assessment of Luther.

I am sure that Dr. Sippo will be offering a retraction at any moment.

Now TF, that would be a completely off the wall, credibility destroying, thoughtless, anything to defend the first crazy thing I said, thing to say. We all know that Dr. Sippo doesn't engage in that kind of silliness.

Every now and then I get reminded that Sippo is a doctor. Somehow, that fact gets lost when it comes to apologetics. One expects a doctor to be very intelligent, of which I assume him to be, considering he writes so eloquently, regardless of the rhetoric we've become so accustom to. However, it is for this very reason that I see his "in-your-face" rhetoric as nothing more a defense mechanism. It masks those things he cannot answer for and the gullible follow. One gets a vision of the mighty Wizard, leading the land of Oz, rallying the munchkins against the "Prots" and the heretical flying monkeys, but when the curtain is pulled, all we see is a smallish man and a lot of bells and whistles.

I've thought of this passage from Ratzinger while reading about your earlier references to this exchange with Sippo. Thanks for putting it up on the blog!

This is a very important point, I think. In the past, when people have mentioned that the Catholic Apologetics community sometimes stands apart from the "center" of Catholic scholarship, this is taken to mean that the apologists are not Catholic "liberals" or "modernists" or something like that. But when you have someone who becomes pope (Ratzinger) set over against a pop-apologist (Sippo), the original point becomes less murky and that counter-response is less convincing.

Well...that probably made no sense. Anyway, thanks!