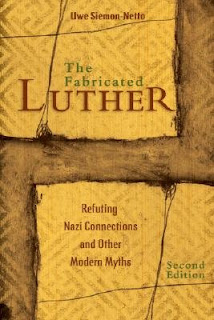 No, no, no, you don't understand. Luther was a seriously evil and twisted man of dubious mental stability. We know this because if he wasn't then people can't say that he was. Is that clear Mr. Swan?!

The Jewish community's concern that anti-Semitism would be ignited as a result of Mel Gibson's film, The Passion of the Christ, was reasonable in 2003.

So-called "passion plays" were meted out in pre-Nazi Germany in the years leading up to the holocaust when six million Jews were slaughtered by Adolph Hitler's Fascist regime. These passionate plays were performed, then, in densely populated Roman Catholic Bavaria, for no apparent purpose other than to remind the future Nazis of "the Christ killers."

Evangelical Protestants, on the other hand, traditionally echo the words of evangelist Billy Graham, who has said,

"As soon as I began to study the Bible in earnest, I discovered the debt I owe to Israel, to Judaism, and to the Jewish people."

But we can be grateful for Mel Gibson's film in two respects:

• Due probably to the controversy and media attention swirling around that very real threat, the film inflamed no immediate anti-Semitism directly.

• Although the Jewish religious leaders of His day rejected Jesus as their Messiah – in order that the Gentiles might be saved – due to the graphic nature of the film, few will soon forget how mercilessly Jesus Christ was tortured and killed on a ROMAN CROSS.

Thanks for the comment- one question, exactly what do you mean by "Roman cross"?

I read in a publication called The Catholic Gazette.

"The Jewish Peril and The Catholic Church."

"That there has been and still is a Jewish problem, no one can deny..."

Rest is gibberish about race, Martin Luther being friends with the Jews.


Wow, what a read. If there was ever an example of pure propaganda without facts, that was it.

A mind that could put something like that old article in print is similar to people who find space aliens and bigfoot in their backyards.

I don't know anything about the Catholic Gazette, but I wouldn't be surprised if a distant relative of Jack Chick was involved with the publication.

Indeed. It's as though it were master-minded by Hitler himself. Thanks for pointing it out, James Swan.

For your sake, however, I would be more careful if I were you about criticizing the work done for the Lord by your brother in Christ, Jack Chick. Countless numbers have come to know the Lord through his ministry, believe it or not. The Lord uses him mightily through those silly cartoons (haven't you read his purpose in using them, on his web site?).

Be careful: "The fear of the Lord is the beginning of wisdom." And how dare we condemn ANY means the Lord deems fit to win souls with from this present darkness into His glorious light, brother Swan?

"I don't know anything about the Catholic Gazette, but I wouldn't be surprised if a distant relative of Jack Chick was involved with the publication."

I dont know either, Jack Chicks cousin maybe.
I'd be generous and say it's some English parish magazine.

I don't have a problem with cartoons, or even comic books as a mode of communication.

I haven't read Mr. Chick's materials in over 20 years, so in honesty, I'm unfamiliar with his theological paradigms. If he indeed presents an accurate gospel message, I'm sure that people can be reached, even if the message is presented in a cartoon.

On the other hand, I don't follow or condone some of the methods of argumentation employed by Mr. Chick. I don't condone an apologetic against Romanism that tries to prove Jesuit spies have infiltrated Protestantism. That in fact, was why I mentioned Chick in my previous comment. The idea that Jewish people were infiltrating the church, or behind the Reformation is simply unfounded. It was very reminiscent of Mr. Chick.

Also, I'm not a dispensationalist, so my argumentation against Romanism has a different emphasis. Rather than speculate as to whether or not the Roman Church is that alluded to in Revelation, I would much rather defend and promote the sole sufficiency of Scripture, and sola fide.

I realize Luther was convinced of the role of the papacy in the book of Revelation, but he was also convinced his days were literally, the last of the last days. In his mind, the world could only go on a short while longer:

In other words, Luther was wrong in his eschatology. The emphasis he placed in his later life on eschatology drove him to write things that he probably wouldn't have otherwise.

that said, I appreciate you stopping by and your comments.

it really was an interesting read, as wacky as it was. Thanks for letting me know about it.