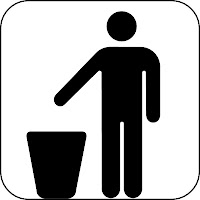 This comment was directed to me on another blog:

You better ignore us, this is not like your soapbox, where you shut down commenting when you start being confuted.

I shut down comments or delete them when personal attacks and insults are in the comments, either toward me, or my other bloggers, or my other friends.

I haven't kept these rules a secret, either.

It is very sad that Roman Catholics claim to have such a deeper "spirituality", yet, if I were to post the comments from Roman Catholics I've had to delete off my blog, one would wonder exactly what that deeper spirituality actually entails. Interestingly, I've noticed one well known Catholic apologist, with more than a few books published by an actual "real" publisher (not Lulu!) is prone to using profanity, like the "f" word on his blog, among other scatological statements.

I've said it before, but it needs to be repeated: this year, I will have a very low tolerance level for insults in the comment boxes. So far, 3 or 4 people are on "purposeful delete" every time they post, no matter what they post.
Posted by James Swan at 5:52 PM

is prone to using profanity, like the "f" word on his blog

Just an FYI, all of your comments now reside in the "purposeful delete" bin as of 2/20/09, and there they will stay.

Just an FYI, all of your comments now reside in the "purposeful delete" bin as of 2/20/09, and there they will stay.

So they went *straight* to Hell... they're not even in Purgatory !? Wow! See, now THAT'S what I would call self-consistency! >:)

I was browsing through the Internet a few days back to check out for blog commenting service providers and came across seo traffic spider. I have used their service and found it the best so far. They communicate promptly with their clients and do a perfect job and meet requirements. I thought this information may be helpful for those looking our for professional SEO services and this would save them the time to research on the best and affordable service providers.

In the middle ages, Germanic culture often was 'littered' with scatalogical references and phrases, perhaps the most polite of which would be the term "filthy rich" which is still in modern use, I can't be certain but it's possible Luther himself used a few remarks of such nature, and in his era it was'nt considered ill mannered.
Just thought I would mention it.

I like your blog, it's added to my faves :o)

Luther himself used a few remarks of such nature, and in his era it was'nt considered ill mannered.

Most of the scatalogical insults were actually aimed at the very rich.. I think there is a painting from the time, depicting a pig defecating out gold coins.

Thanks for the link.

send me angry and insulting e-mails

Hmm, I called your last article at the AOMin blog profoundly ignorant, because it was. Not sure if you consider that insulting. But, if you don't consider it insulting for James White to tell people they are ignorant of Greek (as he frequently does), hopefully you will apply a consistent standard to one who tells you that you are ignorant of Catholic spirituality.

I once started a thread on a religious discussion board--it was not one run by Roman Catholics. I asked an honest question about double standards I saw in the posts of the various RC's on that board--I did not ask it in an accusing manner,and I stated it di not apply to all--or even most RC's--just the ones there that used double standards. The thread was deleted because the same RC's I asked the honest question responded with ad Hominem attacks--no questions to clarify what I had posted, no answers to my question, no defense of what I saw as a double standard, etc. Just ad hominem attacks--and some quite nasty as well.

Those RC's were the excsptions in the overall world of RCism, but unfortunately there are too many like them out there on discussion boards, chat rooms and blogs.

RC's aren't the only ones using such tactics, but they seem to be the ones I see doing it the most. I have encountered other RC's though that put the attackers to great shame with their sense of decency & fairness--even though I have serious disagreements with their theology--and they with mine.