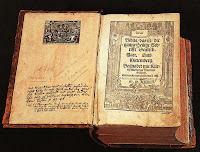 This is an odd one from the CARM boards. After reading my link about Luther's opinion of 2 Maccabees, A Roman Catholic commented,

I note that according to your link, Luther also commends 1 Maccabees saying: "it is proper for the first book to be included among the sacred Scriptures" And further there is a commentary note: *Luther comented on 1 Maccabees, "This is another book not to be found in the Hebrew Bible.﻿﻿ Yet its words and speech adhere to the same style as the other books of sacred Scripture. This book would not have been unworthy of a place among them, because it is very necessary and helpful for an understanding of chapter 11 of the prophet Daniel."﻿ So if you agree that Luther had good reasons to reject 2 Maccabees, my question to you and other Protestants is why then do you not similarly listen to him on the matter of 1 Maccabees? Why then do you exclude 1 Maccabees from your canon? Or are you now going to tell us that Luther was wrong on the first count but right on the second?

The answer of course should have been obvious. Note the first sentence of Luther's: "This is another book not to be found in the Hebrew Bible." Note as well Luther's comments here:

Preface to Parts of Esther and Daniel
Here follow several pieces which we did not wish to translate [and include] in the prophet Daniel and in the book of Esther. We have uprooted such cornflowers (because they do not appear in the Hebrew versions of Daniel and Esther).

Luther didn't think the apocrypha was canonical because it was not in the Hebrew Bible. He also gives various historical and theological reasons for non-inclusion in some of the apocryphal book prefaces as well. So much for Luther simply ignoring tradition and deleting books because of his own theology. Pop goes the balloon.

How is it possible someone could actually respond to this? How much simpler can it be?

Indeed I noted that first sentence well. Luther was commenting on the Hebrew Bible as it stood then, just as Jerome commented on it previously. This is certainly no comment on what the Jews considered sacred scripture at the advent of Christianity.But to use the guidelines of the Hebrew canon to determine the Christian canon, you would first have to prove that the Hebrew canon was completely closed before 70AD, especially in regards the group of books called the "Writings".I am still waiting to see such evidence.

How about responding, "I misread Luther, sorry" ? No, that didn't seem to be an option. So I replied,

"It seems to me you're arguing for the sake of arguing. You had previously asked, "So if you agree that Luther had good reasons to reject 2 Maccabees, my question to you and other Protestants is why then do you not similarly listen to him on the matter of 1 Maccabees? Why then do you exclude 1 Maccabees from your canon?" I noted Luther's reasoning, but since the answer popped your balloon, you just moved into another area.

Then followed a long response, which you can read here. But the relevant part was as follows:

No I am not arguing for the sake of arguing. It is a very valid question, which of course you have not been able to answer at all. I did not expect you to be able to answer my question unless you can point to some credible new scholarship or information which proves that the Hebrew Canon was completely fixed before the 1st century. So it did not surprise me to find you doing a fancy side step to avoid the issue I raised by the usual ad hominem devices. I acknowledged your link where you show Luther gives his reasons for rejecting 2 Macabees, but where he also states that he believes 1 Macabbees is scripture and should be included. Not that Luther's is anything but an individual's personal opinion. An opinion, I might add, who in MY estimation and that of many others, is most unreliable since his opinion was worthless in regards James,Jude, Hebrews and Revelation. Therefore one can reject Luther as an ultimate authority in fixing ANYONE'S canon. As I'm sure you do.

This is exactly where Luther is being misunderstood. Luther, did not think 1 Maccabees was canonical Scripture. The editors of Luther’s Works explain,

“In keeping with early Christian tradition, Luther also included the Apocrypha of the Old Testament. Sorting them out of the canonical books, he appended them at the end of the Old Testament with the caption, ‘These books are not held equal to the Scriptures, but are useful and good to read.’﻿”

Guess which book Luther included in this appendix? 1 Maccabees. If you read Luther's short preface to 1 Maccabees, he's consistent with the above statement, saying the book is "good for us Christians to read and to know." If you can find any statement from Luther saying 1 Maccabees is canonical scripture, you should write Catholic Answers right away, they would be relentless in posting such information against Protestants. You should step back and consider why you were able to uncover the wild fact that Luther held 1 Maccabees to be canonical Scripture, while Akin, Madrid, Sippo, Shea, Ray, (and so on) have not. Perhaps because....it isn't true? Think about it.

For what it's worth, here's Luther's Preface to 1 Maccabees

Preface to the First Book of Maccabees 1533﻿

﻿
This is another book not to be found in the Hebrew Bible.﻿﻿ Yet its words and speech adhere to the same style as the other books of sacred Scripture. This book would not have been unworthy of a place among them, because it is very necessary and helpful for an understanding of chapter 11 of the prophet Daniel.﻿﻿ For the fulfilment of Daniel’s prophecy in that chapter, about the abomination and misfortune which was going to befall the people of Israel, is here described—namely, Antiochus Epiphanes—and in much the same way that Daniel [11:29–35] speaks of it: a little help and great persecution by the Gentiles and by false Jews, which is what took place at the time of the Maccabees. This is why the book is good for us Christians to read and to know.

In the first place, since Antiochus is regarded as a figure or image of the Antichrist who perpetrated the abomination and desolation of the worship of God in Jerusalem and in Judea not long before the birth and first coming of Christ, we learn from this to recognize the real Antichrist who is to devastate Christendom and destroy the worship of God [sometime] before the second and final coming of Christ. Therefore we should not be terrified when we experience such things and see them happening before our very eyes. Rather, be the chaos ever so great, and the devil as angry as he knows how, we should hold fast to this and take comfort in it, that we and all Christendom must nevertheless be sustained and finally saved.


For we too see the help, though small and slight, which God the Almighty has begun to grant us. The dear and holy gospel is the sword with which God’s own can nevertheless valiantly attack the Antichrist of our day and actually accomplish something—even though it cost much suffering and bloodshed—just as God aided his people with the sword of the Maccabees in that day. Although it did not happen without persecution and great heartache, they nevertheless cleansed the temple, restored the worship of God [4:36–61], and brought the people together again under their former government. Today, in this same way, the gospel is sweeping out idolatry—as Christ says, that his angels will purge out of his kingdom all causes of offense [Matt. 13:41]—and is bringing the real Christians together again into the old true Christian faith and unto genuine good works and worship of God.

In the second place we should take heart that God helped those people not only against Antiochus and the Gentiles but also against the traitorous and disloyal Jews who had gone over to the Gentiles and were helping to persecute, kill, and torment their own people and brethren. We should be sure of [God’s help] and remain unafraid even when false Christians and rabble-rousers—who have now become our betrayers—turn against us and plague and harm us as much as, if not more than, our Antiochus or Antichrist. For Daniel [11:32–34] has said it, and for our comfort proclaimed it, that things must happen this way; that the children of our people would deal treacherously with us and blithely help to persecute us. Therefore we shall not fare much better than those pious children of Israel did under their Antiochus or Antichrist, at the hands of their false brethren.

However those same enemies and traitors are amply punished by God at the end; their tyranny and treachery does not go undetected. So with a glad eye and good courage we may face our Antichrist, tyrants, and rabble-rousers, and endure their abuse, confident that they will not go on very long, much less bring matters to the point they intend, that instead (like Antiochus and those other traitors) they will soon be getting their due reward. Indeed a good deal of that punishment has already begun and is daily increasing. Hardened and blinded, though, they remain unmoved by all this. However that makes no difference to us: they will get it just as those others did. Since they do not want it any other way, may God the Almighty grant that it be done quickly and soon, that his name be hallowed, his kingdom advanced, and all saddened hearts, now held captive in the kingdom of the devil and of the Antichrist, be comforted. Amen.

Labels: Apocrypha, Luther and the Canon