The Facts About Luther: 1916 Edition 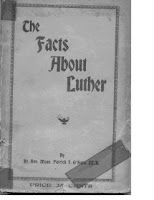 "This is a sobering, eye-opening, record-straightening analysis of the life, the thought, and the work of Martin Luther...The author states that "We would willingly allow him (Luther) to remain in his grave, but as his friends insist on resurrecting him, we have no alternative but to show the disciples of a system which is the child born of a great lie and nursed and fostered in heresy and infamy that Luther by his own works and teachings was a malicious falsifier of God's truth, a blasphemer, a libertine, a revolutionist, a hater of religious vows, a disgrace to the clerical calling, an enemy of domestic felicity, the father of divorce, the advocate of polygamy, and the propagator of immorality and open licentiousness. These charges are serious, but we beg to remind you that we have not interpreted or edited Luther as he took the liberty to do with the scriptures. We have merely quoted him from reliable sources and made him his own accuser and judge." Wow!"- Catholic Treasures Website

A few years back, I invested in a 1916 copy of The Facts About Luther (At the bottom, the price says "25 Cents"...my price paid was considerably more). Pictured above, is my scan of my copy's front cover. I sought out the earlier edition because I wanted to check the differences between earlier versions and the later TAN reprint. It is very similar. One helpful feature of the older edition is the topic index. It's easier to navigate around the book with this feature.

Google books continues to make buying old books a thing of the past. They have put up a complete view version of this book. I must say Google books has made a lot of what I've done over the years much easier to do. Now, I don't have to spend $$$$ to buy old books to do research. In fact, I would go further to point out that misquoting, or poorly quoting Luther (or whoever) can be researched with more ease for...anybody. I have compiled a blog entry of quotes from O'Hare's book. Now, anyone can search the text and find where a lot of these "rough" Luther quotes come from.

One thing I've always wanted to do with O'Hare, is check the quotes of the Protestant "scholars" he cites. The books and sources he refers to typically date from the 1800's. some of these books I've actually purchased, like Trevern's Amicable Discussion. When I get some time, I'm going to dig through some of O'Hare's citations to see if I can find them via Google books.

Some may wonder why I've spent so much time with this book. I was reminded recently of the impact this text has had on current trends in popular Catholic apologetics. I found Steve Ray citing it in his book, Crossing the Tiber: Evangelical Protestants Discover the Historical Church. It used to be quite common for Catholics to cite this text. If I recall, it was reading Catholic apologetic websites that intrigued me enough to purchase this book. Now, some of those apologists that did appeal to this text no longer do. On the other hand, while reading the Amazon review page of the book, people are still reading it as if it is actually accurate. A recent reviewer stated,

"Not long ago, we heard an excellent lecture by Brother Francis Maluf, wherein the learned and saintly monk averred that, had there been no Luther, there would have been no Hitler. We must admit that we did not then comprehend the true meaning of Brother's assertion. But, having finished Monsignor O'Hare's most excellent book on the "reformer", we now understand its intent quite clearly."

One other thing that intrigues me is to find out about the author Patrick O'Hare. I would be really interested in finding out any background information on him. I haven't found all that much. I've not found anything else he's written, not have I been able to find any background material on him.
Posted by James Swan at 5:59 AM

He says: "As a Protestant, Martin Luther was my hero, now that the whole story is known, my opinion of the man has changed."

The only facts about Luther we need to know are these two:

1) The RCC is the great whore, the mother of abominations (i.e. Lutheranism and Calvinism)

2) Luther commanded the anabaptists to be murdered because he hated them for teaching against his favorite heresy, i.e. infant baptism.