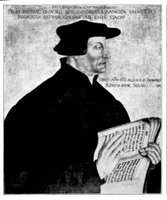 Because he stands in the shadows of Luther and Calvin, Zwingli (1484-1531) gets overlooked often. His writings can be difficult to track down. One can go to the local bookstore and get a Calvin or Luther bio or anthology, but you’ll do a lot searching to actually get a Zwingli book. When you do read Zwingli, it becomes apparent that he was not on par with either Luther or Calvin.

I’ve always wanted to read Zwingli discussing his Mariology. For the most part, the only people who seem to “care” about Zwingli’s Mariology are Roman Catholics. And really, they probably aren’t interested in actually reading and researching Zwingli. Rather, his writings are used for polemical purposes- to show that an early Reformer had particular beliefs about the Virgin Mary. It does appear that Zwingli did have some similar beliefs about Mary to those found in Roman Catholicism. This is a subject that I plan on exploring. I'd like to see for myself how Zwingli understood the role of Mary. I refuse to be spoon fed Zwingli quotes from Catholic apologetics- for I doubt most of the pop Catholic apologetic writers have actually read Zwingli on this subject.

Well, here's a present from me to the Catholic apologetics community. I did finally track down a piece from Zwingli on Mary. It is a section from the “Sermon on Mary, The Pure Mother of God”. Zwingli preached the sermon in Zurich in the autumn of 1522. In it, you will find Zwingli saying all sorts of things about Mary. He calls her "pure" and "holy", a "spotless virgin" etc. Note though, Zwingli’s explanation of the Greek word "kecharitomene". Zwingli understands the word to mean “favorable”.

“When the angel came in unto Mary, he greeted her with these words: " Hail, thou art full of grace! The Lord is with thee, blessed art thou among women." Here it is to be noticed that this word "full of grace" is, translated from the Greek word "kecharitomene," which means beloved, or filled with grace, highly favored, whereby we understand that the word “full of grace " should not be taken to mean that she was from herself full of grace, but that all the grace with which she was so rich and full was from God. For to be full of grace is nothing else than to be highly favored of God and to be chosen before all other women. For grace is only the favor of God. So if I should say that God has given much grace to men, I should say nothing else than God has been very favorable to men and done loving things for them. Therefore is the pure Mary full of grace from God, as she herself sings: "He hath done to me great things." She says not: "I am great from mine own grace," but " the Almighty hath done to me great things." For immediately afterward she adds: "He hath regarded the lowliness of His handmaiden, for behold from henceforth all generations shall call me blessed." [Source: Guy Carelton Lee (ed.), The World’s Orators (New York: GP Putnum’s Sons, 1900, 95-96).
Posted by James Swan at 6:33 AM

Quick question. During that time, wasn't the debate in Roman circles concerning the Immaculate Conception still going on strong? I ask because there was a time when it was a banned topic. Regardless, it seems more than a touch hypocritical to me for Catholics to use this argument when at the time their own church was in heavy ebate about it.

Off the top of my head, it was not until 1854 or 1864 that Pius IX in Ineffabilis Deus pronounced and defined this doctrine of the Roman Church. In 1950 Pius XII declared Mary was taken to heaven and did not die. Vatican 2 states that Mary was sinless, taken to heaven and did not die and was crowned the Queen of Heaven. Some in the Roman Church believe she also redeems the lost just as Jesus.

Now none of this is supported by scripture, but by traditions and some obscured references to honoring Mary found in ancient church texts

During that time, wasn't the debate in Roman circles concerning the Immaculate Conception still going on strong? I ask because there was a time when it was a banned topic. Regardless, it seems more than a touch hypocritical to me for Catholics to use this argument when at the time their own church was in heavy ebate about it.

Check out Miegge's discussion on page 125-126 in his book "The Virgin Mary"- I think it was you got this book right? Indeed, there was heavy debate going on- I don't recall the topic being "banned" (if you can recall the specifics, please let me know) - but Miegge points out that the Pope threatened excommunication on any discussion of the I.C. where one of the parites accuses the other of heresy or impiety.

You can check out this link to give a rather thorough history of the teaching on the Immaculate Conception. http://www.newadvent.org/cathen/07674d.htm

Recall Scotus and the "decuit" argument. It was not fitting that the woman whose body would give flesh to the Son of God should in any way be tainted by sin.