Free Book: Luther Examined and Reexamined: A Review of Catholic Criticism and a Plea for Reevaluation 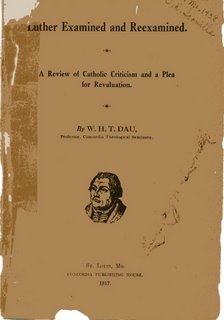 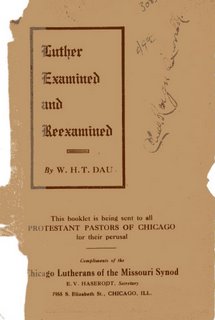 Above: The Title Page and Cover from my 1917 copy of "Luther Examined and Reexamined: A Review of Catholic Criticism and a Plea for Reevaluation"


A while back I mentioned this book:

This is an extremely rare book- I was pleased to see that reprints were circulating for around $50.- $75.

"I believe this is a copied online version that is available in PDF (adobe acrobat) for downloading and reprinting. Please let me know if this is the correct version, it seems to be as per your blog description - same title and same author, but I have not read it yet and instead have posted a link in the response portion of your post for quick access to those who wish to read it."

Jedi is correct- this is the book, and it's available via this link for free. I'm very pleased-my copy has no binding and the pages are yellowed from age.

This book is one of the few that directly looks at Roman Catholic arguments against Luther. It is a short book, and easy to read. What makes it important is that it interacts with some of the older "anti-Luther" material that is circulating around cyber-space (O'Hare, Grisar, etc).

This book will be a valuable reference to have in cyber-space. Anti-Reformation rhetoric flows frequently. For instance, here's a blog entry I just read today-

The majority of the Luther citations used in this blog link come from an outdated version of Luther's Tabletalk and Patrick O'Hare's book, The Facts About Luther. It's unbelievable how much mileage O'Hare's book gets.

Dau was a contemporary of O'Hare. He say's of O'Hare's book:

"Quite recently a Catholic writer has told the world in one chapter of his book that "the apostate monk of Wittenberg" was possessed of "a violent, despotic, and uncontrolled nature," that he was "depraved in manners and in speech." He speaks of Luther's "ungovernable transports, riotous proceedings, angry conflicts, and intemperate controversies," of Luther's "contempt of all
the accepted forms of human right and all authority, human and divine," of "his unscrupulous mendacity," "his perverse principles," "his wild pronouncements." He calls Luther "a lawless one," "one of the most intolerant of men," "a revolutionist, not a reformer." He says that Luther "attempted reformation and ended in deformation." He charges Luther with having written and preached "not for, but against good works," with having assumed rights to himself in the matter of liberty of conscience which "he unhesitatingly and imperiously denied to all who differed from him," with having "rent asunder the unity of the Church," with having "disgraced the Church by a notoriously wicked and scandalous life," with having "declared it to be the right of every man to interpret the Bible to his own individual conception," with "one day proclaiming the binding force of the Ten Commandments and the next declaring they were not obligatory on Christian
observance," with having "reviled and hated and cursed the Church of his fathers."

"These opprobrious remarks are only a part of the vileness of which the writer has delivered himself in his first chapter. His whole book bristles with assertions of Luther's inveterate badness. This coarse and crooked Luther, we are told, is the real Luther, the genuine article. The Luther of history is only a Protestant fiction. Protestants like Prof. Seeberg of Berlin, and others, who have criticized Luther, are introduced as witnesses for the Catholic allegation that Luther was a thoroughly bad man. We should like to ascertain the feelings of these Protestants when they are informed what use has been made of their remarks about Luther. Some of them may yet let the world know what they think of the attempt to make them the squires of such knights errant as Denifle and Grisar."

"The book of Mgr. O'Hare, which has made its appearance on the eve of the Four−hundredth Anniversary of Luther's Theses, is merely another eruption from the same mud volcano that became active in Luther's lifetime. It is the old dirt that has come forth. Rome must periodically relieve itself in this manner, or burst. Rome hated the living Luther, and cannot forget him since he is dead. It hates him still. Its hatred is become full−grown, robust, vigorous with the advancing years. When Rome speaks its mind about Luther, it cannot but speak in terms of malignant scorn. If Luther could read Mgr. O'Hare's book, he would say: "Wes das Herz voll ist, des gehet der Mund ueber." (Matt. 12, 34: "Out of the abundance of the heart the mouth speaketh.")"
Posted by James Swan at 10:20 AM

Thank you for the PDF James and thak you MasterJedi!!

I must go read now.

You're welcome. You will enjoy this book.