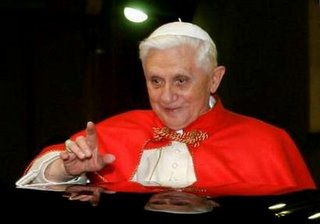 Above: The Pope taking a peak at Rome through the sunroof of a car in the cold January air.


"Vatican, Jan. 09 (CWNews.com) - Pope Benedict XVI reiterated his commitment to the pursuit of Christian unity, as he met on January 7 with a delegation from the World Alliance of Reformed Churches.
The Holy Father thanked the group of its presence at the funeral for Pope John Paul II and the inaugural Mass of his own pontificate. These "signs of mutual respect and friendship," he said, reflect the fruits of 40 years of ecumenical dialogue.

The Pope reminded the Protestant group that soon after his election to the pontificate "I voiced my own conviction that 'inner conversion is the prerequisite for all ecumenical progress." Like his predecessor John Paul II, Benedict XVI said that this inner conversion requires a "purification of memory." The Pope said that he was "pleased to learn that several of the Reformed churches" have made a commitment to the same process. He voiced his hope that such efforts would help both sides to "surmount the tragic divisions which arose among Christians in the 16th century." The World Alliance of Reformed Churches represents 214 Protestant bodies, representing more than 75 million Christians of the Reformed tradition that traces its heritage to John Calvin and John Knox. The group's delegation meeting with the Pontiff was led by its president, Rev. Clifton Kirkpatrick. "


"Purification of memory?" Anybody know what's going on here? Here is the address given by the Pope to the Reformed delegates- it explains further what is meant:

"Dear Friends,
At the beginning of this new year I welcome you, the leaders of the World Alliance of Reformed Churches, on the occasion of your visit to the Vatican. I recall with gratitude the presence of Delegations from the World Alliance both at the funeral of my predecessor Pope John Paul II and at the inauguration of my own papal ministry. In these signs of mutual respect and friendship I am pleased to see a providential fruit of the fraternal dialogue and cooperation undertaken in the past four decades, and a token of sure hope for the future.

This past month, in fact, marked the fortieth anniversary of the conclusion of the Second Vatican Council, which saw the promulgation of the Decree on Ecumenism Unitatis Redintegratio. The Catholic-Reformed Dialogue, which came into existence shortly thereafter, has made an important contribution to the demanding work of theological reflection and historical investigation indispensable for surmounting the tragic divisions which arose among Christians in the sixteenth century. One of the results of the Dialogue has been to show significant areas of convergence between the Reformed understanding of the Church as Creatura Verbi and the Catholic understanding of the Church as the primordial Sacrament of God’s outpouring of grace in Christ (cf. Lumen Gentium, 1). It is an encouraging sign that the current phase of dialogue continues to explore the richness and complementarity of these approaches.

The Decree on Ecumenism affirmed that "there can be no ecumenism worthy of the name without interior conversion" (No. 7). At the very beginning of my Pontificate I voiced my own conviction that "inner conversion is the prerequisite for all ecumenical progress" (Homily in the Sistine Chapel, 20 April 2005), and recalled the example of my predecessor, Pope John Paul II, who often spoke of the need for a "purification of memory" as a means of opening our hearts to receive the full truth of Christ. The late Pope, especially on the occasion of the Great Jubilee of the Year 2000, gave a powerful impulse to this endeavour in the Catholic Church, and I am pleased to learn that several of the Reformed Churches which are members of the World Alliance have undertaken similar initiatives. Gestures such as these are the building-blocks of a deeper relationship which must be nurtured in truth and love.

Dear friends, I pray that our meeting today will itself bear fruit in a renewed commitment to work for the unity of all Christians. The way before us calls for wisdom, humility, patient study and exchange. May we set out with renewed confidence, in obedience to the Gospel and with our hope firmly grounded in Christ’s prayer for his Church, in the love of the Father and in the power of the Holy Spirit (cf. Unitatis Redintegratio, 24)."

So, in order to "receive the full truth of Christ" one needs a "purification of memory". What exactly does this mean?

Contrast this with Colosians 2:10
"...and you have been given fullness in Christ, who is the head over every power and authority."

Contrast this with Ephesians 1:3
""Praise be to the God and Father of our Lord Jesus Christ, who has blessed us in the heavenly realms with every spiritual blessing in Christ."

"﻿And He Himself gave some to be apostles, some prophets, some evangelists, and some pastors and teachers, ﻿for the equipping of the saints for the work of ministry, for the edifying of the body of Christ, ﻿till we all come to the unity of the faith and of the knowledge of the Son of God, to a perfect man, to the measure of the stature of the fullness of Christ; ﻿that we should no longer be children, tossed to and fro and carried about with every wind of doctrine, by the trickery of men, in the cunning craftiness of deceitful plotting, ﻿but, speaking the truth in love, may grow up in all things into Him who is the head—Christ— ﻿from whom the whole body, joined and knit together by what every joint supplies, according to the effective working by which every part does its share, causes growth of the body for the edifying of itself in love. "

If so, I do not consider the Reformers those who perpetuated "cunning and craftiness in their deceitful scheming." Hear Calvin's comment on Ephesians 4: 14

"There will always be impostors, who make insidious attacks upon our faith; but, if we are fortified by the truth of God, their efforts will be unavailing. Both parts of this statement deserve our careful attention. When new sects, or wicked tenets, spring up, many persons become alarmed. But the attempts of Satan to darken, by his falsehoods, the pure doctrine of Christ, are at no time interrupted; and it is the will of God that these struggles should be the trial of our faith. When we are informed, on the other hand, that the best and readiest defense
against every kind of error is to bring forward that doctrine which we have learned from Christ and his apostles, this surely is no ordinary consolation.

With what awful wickedness, then, are Papists chargeable, who take away from the word of God everything like certainty, and maintain that there is no steadiness of faith, but what depends on the authority of men! If a man entertain any doubt, it is in vain to bid him consult the word of God: he must abide by their decrees. But we have embraced the law, the prophets, and the gospel. Let us therefore confidently expect that we shall reap the advantage which is here promised, — that all the impostures of men will do us no harm. They will attack us, indeed, but they will not prevail. We are entitled, I acknowledge, to look for the dispensation of sound doctrine from the church, for God has committed it to her charge; but when Papists.avail themselves of the disguise of the church for burying doctrine, they give sufficient proof that they have a diabolical synagogue. "

Source: Calvin's Commentary on Ephesians 4:14
Posted by James Swan at 9:36 AM

I posted about this earlier in the week, here.

It seems to be one of those news items that flew in under the radar of most evangelicals.

This news story is illustrative of the attitude of the Roman Catholic Church, as expressed through the papacy. The belief is that all non-Roman catholics are brethren who have gone astray and must be tendely shepherded back into the sheepfold.

Thanks for stopping by- I'll definately check into your link.

fm483-
Interesting though, they will not admit doctrinal error- which is really what the problem is. It doesn't matter really who killed who- or whatever bad things have happened between Protestants and Catholics- It is doctrine that seperates us. To simply be nice to Protestants is like putting a band-aid on severed limb- as if that will grow the arm back.