Calvin Cites Augustine: "The Will of God is the Necessity of Things"

In chasing down a John Calvin quote, I came upon a citation of Augustine. In Institutes III.23.8, Calvin says,


Here they have recourse to the distinction between will and permission. By this they would maintain that the wicked perish because God permits it, not because he so wills. But why shall we say “permission” unless it is because God so wills? Still, it is not in itself likely that man brought destruction upon himself through himself, by God’s mere permission and without any ordaining. As if God did not establish the condition in which he wills the chief of his creatures to be! I shall not hesitate, then, simply to confess with Augustine that “the will of God is the necessity of things,” and that what he has willed will of necessity come to pass, as those things which he has foreseen will truly come to pass.

Calvin's comment here enters that controversial place many theists fear to go, God's absolute unchangeable will, God's permissive will, predestination, reprobation, and Adam's fall into sin. I was curious to see Augustine's citation in context, to see if Calvin either mis-cited or misused Augustine. Granted, this may seem in some sense like an invitation to debate or discuss God's sovereignty, but my goal is primarily academic, focusing on how Calvin cited Augustine.

Augustine: Documentation
The version of Calvin's Institutes I utilized was that translated by Ford Lewis Battles and edited by John T. McNeill. This text provides a reference:  Augustine, On Genesis in the Literal Sense VI. 15. 26 (MPL 34.350). MPL refers to Migne Patrologia Latina. Here is 34:350. The text reads: 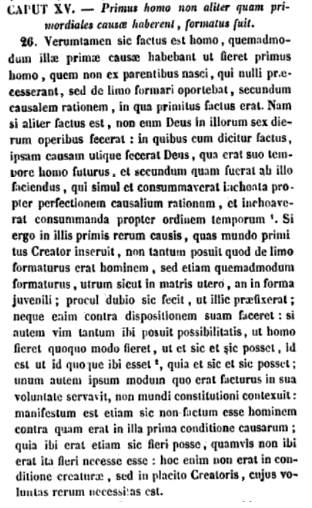 Calvin appears to have cited last part of  the last sentence: 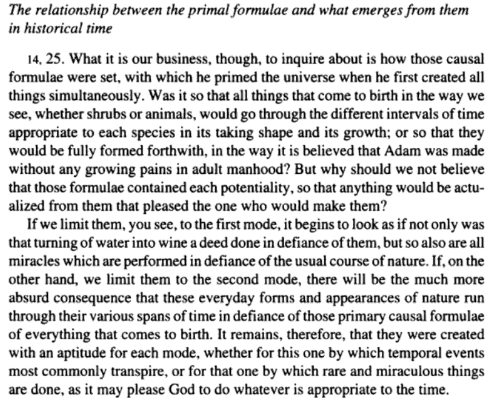 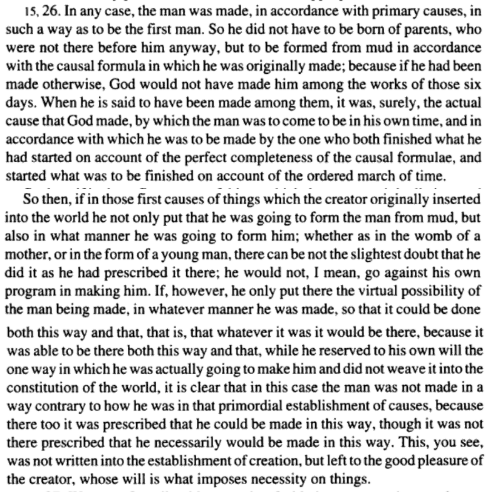 Conclusion
Calvin's comments occur in his overall discussion on predestination and reprobation primarily, but he ventures into the fall of Adam into sin. Did God permit man's fall into sin or did he ordain it? Calvin affirms the later and says, "I shall not hesitate, then, simply to confess with Augustine that 'the will of God is the necessity of things,' and that what he has willed will of necessity come to pass, as those things which he has foreseen will truly come to pass." Later in the same section Calvin states, "Accordingly, man falls according as God's providence ordains, but he falls by his own fault." If this sounds tricky, Calvin goes on to say that we should spend our time contemplating Adam as the evident cause of the fall rather than "seek a hidden and utterly incomprehensible cause in God's predestination":


Accordingly, we should contemplate the evident cause of condemnation in the corrupt nature of humanity—which is closer to us—rather than seek a hidden and utterly incomprehensible cause in God’s predestination. And let us not be ashamed to submit our understanding to God’s boundless wisdom so far as to yield before its many secrets. For, of those things which it is neither given nor lawful to know, ignorance is learned; the craving to know, a kind of madness.

Did Calvin mis-cite Augustine? I don't think so. Both Calvin and Augustine in essence agree that all things that God created conform to His sovereign necessity, however each applied it in different areas. The overarching point is God's necessity.  I see some overlap with Calvin the continuation of Augustine's comments in the next section. Augustine says we don't know if a person will grow old, but if he does, it was God's will, "who established all things" because "the hidden formula of old age is there in the youthful body" (VI.16.27). The necessity of the man growing old is because of God, "For if he wills that will of necessity be in the future, and it is those things that he has foreknown which will really be in the future" (VI.17.28). "The one who foreknows them [God] cannot be mistaken" (VI.17.28). He further refers to God adding fifteen years to the life of Hezekiah, something God knew he was going to do "before the foundations of the world (Eph 1:4) that he was going to do, and which he reserved to his own will" (VI.17.28).  "God's foreknowledge cannot be mistaken. And this is why what he foreknew would of necessity come to pass in the future" (VI.17.28).  Augustine further says that God "deliberately predetermined" Adam according to His will (VI.18.29).

Did Calvin misuse or misapply Augustine here? That's a little less clear to me.  I expected that when I tracked down the Augustine reference, the context would be directly related in some way to the issues of predestination or the fall into sin.  I was surprised to find a discussion about whether or not creation is created fully formed or whether it developed! I can certainly see how someone could be critical of Calvin's use of Augustine here, particularly since Augustine does attempt to tackle the implications of sovereignty and the fall in his writings, but not in this particular section Calvin referred to.

Addendum
For an interesting discussion of Augustine's view on man's fall into sin, see: Robert F. Brown, "The First Evil Will Must be Incomprehensible: A Critique of Augustine," JAAR 46, no. 3 (1978) 315-329. While critical, the author helpfully lays out Augustine's various answers to the origin of the fall.
This author says that Augustine came up with various explanations, including that the fall was incomprehensible to human intellect, but at times moved beyond that to  causal explanations.
Posted by James Swan at 9:12 AM

thanks for this article today.

. . . Calvin goes on to say that we should spend our time contemplating Adam as the evident cause of the fall rather than "seek a hidden and utterly incomprehensible cause in God's predestination":

This is good advice and seems to be the intention of the book of Genesis. Genesis chapters 1-3 never go back in time to explain how the cherub ("Lucifer", KJV, Isaiah 14:12 - "shining one" / "star of the morning") became Satan / the serpent (Ezekiel 28:12-17 - the spirit behind the King of Tyre - "you were in Eden, the garden of God", "you were the anointed cherub", "your heart was lifted up because of your beauty"; "you corrupted your wisdom . . . " ) or when or how God's decree decreed the fall of Lucifer or the fall of mankind. or even who the "serpent" of Genesis 3 is - Revelation 12:9 and 20:2 tell us that. Interesting that Satan is in Job chapters 1-2 and Zechariah 3:1-4, but those texts don't say he is one in the garden as a serpent. 2 Corinthians 11:3 tells us that the serpent tempted Eve, but it does not use the word "Satan" or the "devil" explicitly that the serpent is Satan.

Even all of this, the time it takes to put it all together and in Systematic Theologies and the WCF chapter 3 "On God's Decree" and 1689 2nd London Baptist Confession, chapter 3, etc. -

did they and we spend too much time in seeking to figure all this out?

Of God’s Eternal Decree
1. God, from all eternity, did, by the most wise and holy counsel
of his own will, freely, and unchangeably ordain whatsoever comes
to pass: yet so, as thereby neither is God the author of sin, [ so glad for this ! ] nor is
violence offered to the will of the creatures; nor is the liberty or contingency of second causes taken away, but rather established.

In Genesis chapters 1-3, the blame/ guilt is put on us, the humans, going back to Adam and Eve.

Triablogue has a recent article that in the comment box, Jason Engwer links to an old article of yours from 2015 that I had not noticed before:

I could not find the Catholic Answers show that you linked to - it looks like they got rid of that, and I searched for that scholar (Steve Weindenkopf) and it appears he did another show in 2017 - I wonder if he admitted in that show that there was "Sola Fide" before Luther.

Genesis chapters 1-3 never go back in time to explain...

I recall hearing a lecture by Sproul many years ago on Augustine's view of the fall of man, and, if I recall correctly, it was something like where did the desire for sin come from? If man was created perfect, why an imperfect desire?

In the article I mention at the end in regard to Augustine's view the author is harsh toward Augustine that he did attempt to parse it all out, when he should have just stayed away from doing this.

Thanks for the tip, I sorta remember that CA show. I followed some of the links and noticed I transcribed the part of the interview in question. CA used to be fairly generous with keeping extensive archives of their shows, but I haven't kept up with them.