Calvin's Geneva: A rebellious father served four days in prison for insisting on naming his son Claude instead of Abraham 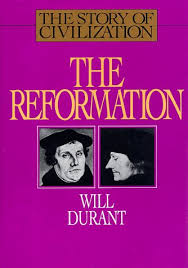 
Children were to be named after Old Testament characters. A rebellious father served four days in prison for insisting on naming his son Claude instead of Abraham (source).

Simply search the phrase "insisting on naming his son Claude" to see the extent of the spread of this information. Of the hits I came across, none were claiming John Calvin himself had a man put in prison for naming his son "Claude." Typically, it's presented as something like, "Laws and facts about Geneva Under Calvin’s Authority" (source). That is, the "Tyrant of Geneva" sent out his troops make arrests.  Let's take a close look at this fact and try to determine it's truth and John Calvin's involvement.

Documentation
I suspect the popularity of this fact finds its genesis in pop-historian Will Durant's book, The Reformation. Durant says,


To regulate lay conduct a system of domiciliary visits was established: one or another of the elders visited, yearly, each house in the quarter assigned to him, and questioned the occupants on all phases of their lives. Consistory and Council joined in the prohibition of gambling, card-playing, profanity, drunkenness, the frequenting of taverns, dancing (which was then enhanced by kisses and embraces), indecent or irreligious songs, excess in entertainment, extravagance in living, immodesty in dress. The allowable color and quantity of clothing, and the number of dishes permissible at a meal, were specified by law. Jewelry and lace were frowned upon. A woman was jailed for arranging her hair to an immoral height.34 Theatrical performances were limited to religious plays, and then these too were forbidden. Children were to be named not after saints in the Catholic calendar but preferably after Old Testament characters; an obstinate father served four days in prison for insisting on naming his son Claude instead of Abraham.35 Censorship of the press was taken over from Catholic and secular precedents, and enlarged (1560): books of erroneous religious doctrine, or of immoral tendency, were banned; Montaigne’s Essays and Rousseau’s Emile were later to fall under this proscription. To speak disrespectfully of Calvin or the clergy was a crime.36 A first violation of these ordinances was punished with a reprimand, further violation with fines, persistent violation with imprisonment or banishment. Fornication was to be punished with exile or drowning; adultery, blasphemy, or idolatry, with death. In one extraordinary instance a child was beheaded for striking its parents.37 In the years 1558-59 there were 414 prosecutions for moral offenses; between 1542 and 1564 there were seventy-six banishments and fifty-eight executions; the total population of Geneva was then about 20,000.38 As everywhere in the sixteenth century, torture was often used to obtain confessions or evidence.

Durant provides a footnote, "Schaff, 492." This refers to Philip Schaff's multi-volume History of the Christian Church, specifically the volume on the Swiss Reformation. Schaff does record this incident:


A person named Chapuis was imprisoned for four days because he persisted in calling his child Claude (a Roman Catholic saint) instead of Abraham, as the minister wished, and saying that he would sooner keep his son unbaptized for fifteen years."1


Parents were warned against naming their children after Roman Catholic saints who nourished certain superstitions; instead of them the names of Abraham, Moses, David, Daniel, Zechariah, Jeremiah, Nehemiah became common. (This preference for Old Testament names was carried even further by the Puritans of England and New England.)

An English translation of this text can be found here. The text states,

The feeling of popular indignation was still further increased by an order which forbade the naming of children after the Roman catholic saints; among the most favorite names were those of Claudius and Balthazar, with which the people had associated certain superstitious ideas.t To heap insult on morality and religion was the order of the day.

"Picot, T. ii, pp. 413-414" appears to be a bibliographic error. The actual reference should be to volume 1, pp. 413-414. Picot mentions that the particular names in question were superstitiously believed to give long life ("...ils croyoient par là procurer une longue vie à ces enfans"). This appears to be the "superstitious ideas" mentioned by Paul Henry.

The name "Claude," particularly, was a troubling name. Here is the exact rule which was issued on November 22, 1546: 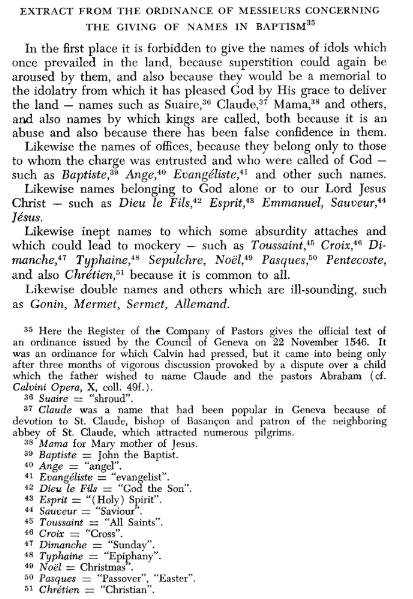 "Claude" was viewed as the name of an "idol," because, as the footnote states, "Claude was a name that had been popular in Geneva because of devotion to St. Claude, bishop of Bassancon and patron of the neighboring abbey of St. Claude, which attracted numerous Pilgrams." Picot and Henry state the name was superstitiously thought to bring long life.  But what of the person arrested? Scott Manetsch provides more information: 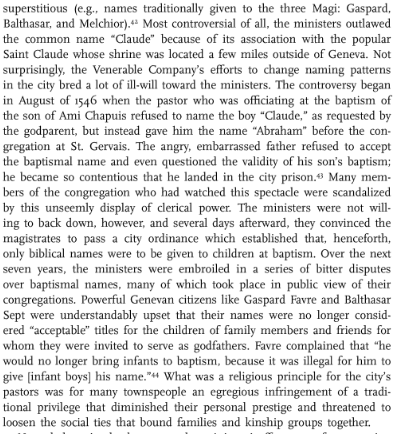 Here we find a few more details. The precise date was not April 27, 1546 (Schaff), but rather August 1546. A godparent requested the name "Claude" during a baptism ceremony. The minister though refused, and gave the child the name Abraham. The father then caused a public disruption during the ceremony, going as far to question the validity of the baptism.  Manetsch goes on to say, 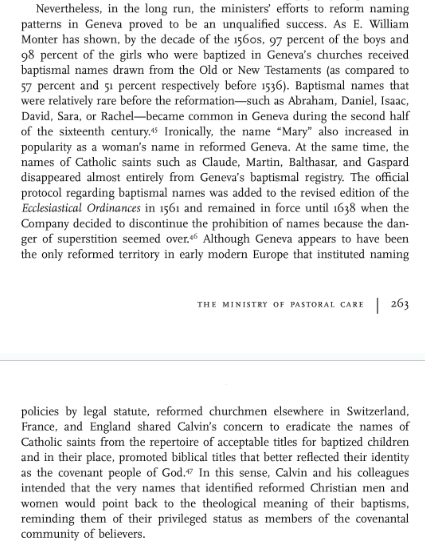 It's interesting that this severe rule the pastors of Geneva put in place was not arbitrary. They had an intended theological purpose, and took it quite seriously. The actual event that caused the arrest of Ami Chapuis was not simply a knock on his door placing him under arrest. Rather it was a disturbance at a public ceremony. Did the ministers of Geneva go too far with this rule? From a theological perspective given the time period, I'm not convinced they did. On the other hand, placing Chapius in prison for a few days does seem too harsh and too far, at least from my modern perspective.

It's important to note specifically that the minster officiating the baptism ceremony was not John Calvin. Was Calvin in agreement with this rule? Certainly. As noted above in the legal document, Calvin was in favor of it, but the law  "only came into being after three months of vigorous discussion." So much for the power of the "Tyrant of Geneva." Yes, Calvin influenced this rule, yes there was an arrest, but it wasn't because Calvin declared it and everyone simply obeyed.

I've not put forth a complete exhortation of Calvin. He did influence the rule on the the naming of children. Did he seek to have people arrested who violated this rule? I don't know. It appears to me that whichever minister was involved may have played a major part in the arrest.  One other thing that I'm not sure of: while Manetsch notes there were a number of "name" disputes, I've not come across any other child naming disputes that resulted in imprisonment.  The tendency is to view this imprisonment of Ami Chapuis as typical and daily in the life of Reformation Geneva. I've not come across any other similar Genevan cases.
Posted by James Swan at 1:18 AM

I was wondering whether or not you were familiar with this blog?:

Sounds familiar, I couldn’t get the link to work.

Darn it! I was hoping that you knew of a way to contact that blog author so that I could obtain permission to view his blog.

Here’s what I would do: use the Internet Archive Wayback Machine to view the blog before it became private. Then, locate contact information (if there is any). You may have to play with the address information by deleting the archived part of the address.

For whatever reason, the blogger has gone private, so I would respect his wishes as much as possible!