Here's a John Calvin tidbit found on a number of web-pages:

In this snippet, John Calvin is painted as being the direct cause for fifty-eight executions, including young adults as well as the elderly. Various versions of these facts can be found across the Internet. For instance, a web-page hosting Fr. Leonel Franca's Calvin the Tyrant of Geneva states these statistics were the result of the "the religious persecutions of Calvin." A website dedicated to biographies states the executions and banishments were all due to religious beliefs: "In the first five years of John Calvin's rule in Geneva, 58 people were executed and 76 exiled for their religious beliefs." Encyclopedia.com says Calvin "acted as a virtual dictator from 1541 until his death," then shows the following results of this dictatorship:


There were some ugly moments in theocratic Geneva. During these years 58 people were executed and 76 banished in order to preserve morals and discipline. Like most men of his century, the reformer was convinced that believing wrongly about God was so heinous a crime that not even death could expiate it.

These are only a few examples of the dissemination of this information. Many more could easily be provided. Did Calvin actually have fifty-eight people executed? Was Calvin having people executed due to his religious intolerance? Were the Genevans being lined up like a row of Servetus's, being executed at the whim of the dictator John Calvin, simply because they defied his theology? Let's take a closer look.

Documentation
The majority of web-pages using these facts do not provide documentation. Many are simply of the "I hate John Calvin" ilk. There are though a few reputable English sources that do mention these facts. For instance, the old Catholic Encyclopedia repeats the same facts, but does not provide helpful documentation.  Probably the most reputable English source (and perhaps that which helped popularize the information) is Philip Schaff's History of the Christian Church. Schaff states,


The official acts of the Council from 1541 to 1559 exhibit a dark chapter of censures, fines, imprisonments, and executions. During the ravages of the pestilence in 1545 more than twenty men and women were burnt alive for witchcraft, and a wicked conspiracy to spread the horrible disease. From 1542 to 1546 fifty-eight judgments of death and seventy-six decrees of banishments were passed.4 During the years 1558 and 1559 the cases of various punishments for all sorts of offences amounted to four hundred and fourteen — a very large proportion for a population of 20,000.

First, Schaff  says his information came from "The official acts of the Council from 1541 to 1559." What was "the Council"? That's not an easily explained answer, for Geneva's legal system was complicated. Schaff explains it here. I have an explanation of it here. On a fundamental level: the "official acts of the Council" does not mean the official acts of the Genevan church or John Calvin. Certainly religion was infused into Genevan polity, but the "Council" does not mean "church council." Second, it does not appear that Schaff actually consulted this source. Rather, he provides a footnote to his chosen source: "According to Galiffe, as quoted by Kampschulte." Since it appears that the later was that which Schaff ultimately utilized, let's treat it first. According to Schaff, "Kampschulte"refers to:


F. W. Kampschulte (a liberal Roman Catholic, Professor of History at Bonn, died an Old Catholic, 1872): Joh. Calvin, seine Kirche und sein Staat in Genf.  Leipzig, 1869, vol. I. (vols. II. and III. have not appeared).  A most able, critical, and, for a Catholic, remarkably fair and liberal work, drawn in part from unpublished sources. (source)

This appears to be Schaff's primary source for this information. It's basically a repeat of the bald facts of fifty-eight executions and seventy-six banishments. What is revealing is that Kampschulte does not go as far as saying Calvin directly caused the execution of fifty-eight people (as if Calvin was in a courtroom looking at the accused and passing the verdict: "take him away for execution"). Rather, Kampschulte insinuates it was Calvin's overall preaching influence on the Genevan judicial system which caused it. Schaff, a careful scholar, made sure to document where the information originated from, noting that Kampschulte himself relied on a source for this information: Galiffe- 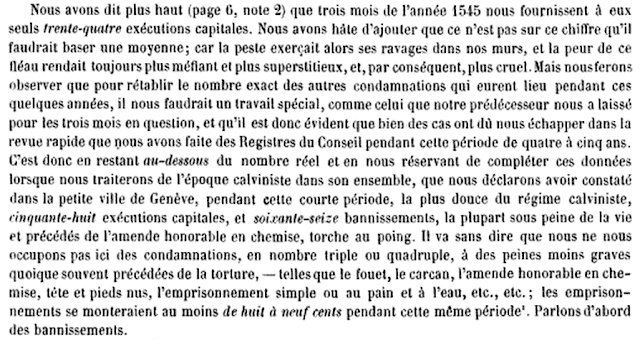 This text basically says the same thing, that during the period in question there were fifty-eight executions and seventy-six banishments. There is an admission though that the statistics in questions were compiled by Galiffe, using the Registers of the Council of Geneva from the period in question. The bones are finally gaining some meat: Galiffe  goes on to provide actual data to back up his statistics. The data for the executions begins on page 100.  He says thirty were men, twenty-eight were women. Of these, thirteen people were hanged, ten were decapitated,  and thirty-five burned alive. Of these fifty-eight executions, twenty were for ordinary crimes: murder, robbery, counterfeit money, forgery, political offenses, etc.  These twenty people were men. The other thirty-eight did involve women, and they were cases involving questioning through torture, most notably in regard to the spread of the plague. There were also some involving witchcraft and divination, but almost all of them were in regard to the spreading of the plague.

Conclusion
The statistic of fifty-eight executions strongly appears to find its genesis from Galiffe. It was he that went through the old Genevan registers and counted. Galiffe was no fan of Calvin. Read Schaff's description of Galiffe here. See also this description.  Richard Stauffer points out that Galiffe was from an "old Genevese family" extremely bitter towards Calvin "not only as a foreigner, but also as an intruder and usurper in the life of the old city." Stauffer includes him as presenting a picture of Calvin in which the Reformer isn't recognizable. Schaff notes that the Galiffe's (father and son scholars) viewed Geneva as "independent and free" until Calvin came along.  In Galiffe's presentation, the emphasis is that whatever evils may have been present in Geneva, Calvin made them much worse once he arrived.

It appears to me that Galiffe's research suffers from the logical error of post hoc ergo propter hoc. Everything that happened in Geneva once Calvin arrived was the fault of John Calvin. As far as I can tell from going through Galiffe's research, there is not a direct line of evidence that Calvin "caused fifty-eight people to be executed." Nor is their a direct line of evidence that those executed suffered for theological reasons or for some disagreement with Calvin's theology. Most telling is that twenty of the number were executed for the ordinary sort of crimes that were punishable during this time period. These executions were not something out of the ordinary in western Europe during this time period.

But what about those other thirty-eight who died as the result of questioning through torture?  The Genevan judical system operated like other sixteenth century judicial systems: through the process of inquisition. Robert Kingdon explains,


The basic principle of this system is a procedure known as inquisition process. It assumes that the real truth of any criminal charge is most likely to emerge from intensive, and repeated questioning of the parties involved.

Kingdon details the entire process that operated in Geneva, much of which preceded Calvin's arrival. He points out that during the progressive process of questioning, the Genevan system allowed for torture along with the interrogation. It was a detailed horrible process, a process not invented by Calvin, but not repudiated by Calvin either. it was the established judicial system of the day, a system that Calvin accepted as being part of the government, not the church. One would wish that Calvin repudiated the system, but he did not. That he didn't repudiate it settles the matter for many that are opposed to Calvinism. Others, like myself, try to put people in their historical contexts and understand them in the world they lived in.

Most interesting is that the event of the plague in Geneva appears to play a strong factor in many of these executions, not Calvin's theology.  There was a pervading fear that swept through Geneva when the plague hit, causing hysteria. Why was the plague here? Who is causing it? There were accusations against people of being deliberate plague spreaders, and these people wound up as victims of the inquisition process. Satan and those who were his sorcerers in Geneva were said to also actively be spreading the plague. Calvin, of course, was certainly in favor of having these people stopped as well.  A helpful overview can be found in Bernard Cottret's, Calvin, a Biography, pp. 178-181. He points out: 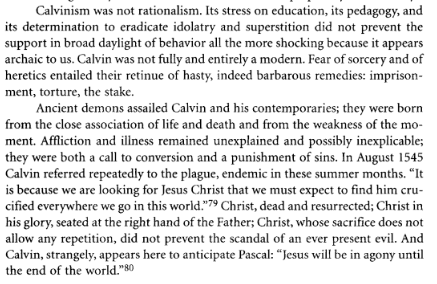