Luther: “Our bodies are always exposed to Satan. The maladies I suffer are not natural, but Devil’s spells.”

Here's a Martin Luther quote that appeared on the CARM discussion boards:

“Our bodies are always exposed to Satan. The maladies I suffer are not natural, but Devil’s spells.” (Martin Luther)

This quote appears to have been posted by someone with sympathies to the Mormon church in response to a Lutheran participant (see my previous entry for details). The point for using it is to defend Mormonism. In another place the same person states, "...demons causing diseases, etc. like much of Christendom used to believe.? I dunno if there is an official LDS doctrine on that. Maybe we are allowed to have opinions on it. But if you wanna talk about Luther, the founder of the Reformation, he certainly believed that demons were responsible for all kinds of stuff that most today would call wacky superstition."

Documentation
No documentation was provided, but the same person posted the quote here also claiming, "As quoted by John Mark Ministries." I found two web-pages from John Mark Ministries using this quote. The first page, Quotes From Luther (2003) appears to have been written by the founder of JMM, Rowland Croucher (but I'm not entirely sure). What's interesting is that Croucher(?) listed a number of undocumented Luther quotes taken from someone who had posted them on an open newsgroup. Croucher(?) determined the quotes probably came via this page, from a person that said he "didn't keep track of the exact citations" because he compiled them for his own "amusement." Croucher(?) then goes on to defend Luther, saying at one point, "...we see that these quotes were not collected out of serious or honest interest, but merely for someone’s careless amusement. Thus, the sincerity and reasonableness of both the compilers of the quotes page and the users of these quotes is called into question."  The second JMM page is simply entitled, Martin Luther (2005). This page also contains a number of "shock" undocumented Luther quotes that appear to have been originally posted by someone going by the moniker,"Mark T." The page simply ends with this vague comment, "Despite the previous posts which discredit Martin Luther, all the good that he did for the Christian faith in the first half of the 1500’s. must be remembered." No documentation is provided for the quotes in question from this other web page.

The quote in the form it's in comes from William Hazlitt's edition of the Table Talk. Hazlitt does not provide a reference to the exact source he used for his translation. He numbers the comment, "DLXXXIII." If this entry is taken along with the previous (DLXXXII), both closely correspond to this German translation of the Tischreden: 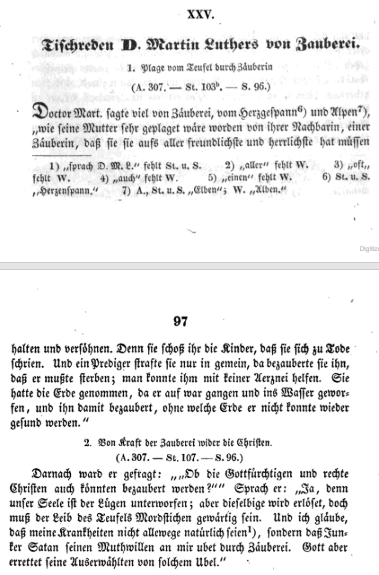 While Hazlitt may have translated from a German source like this, it is not the original text. WA TR III, 131 (entry 2982b) presents how the text occurred in its original form, which was a mix of German and Latin:

DLXXXII.  Dr. Luther discoursed at length concerning witchcraft and charms. He said, that his mother had had to undergo infinite annoyance from one of her neighbours, who was a witch, and whom she was fain to conciliate with all sorts of attentions; for this witch could throw a charm upon children, which made them cry themselves to death. A pastor having punished her for some knavery, she cast a spell upon him by means of some earth upon which he had walked, and which she bewitched. The poor man hereupon fell sick of a malady which no remedy could remove, and shortly after died.

DLXXXIII. It was asked: Can good Christians and God-fearing people also undergo witchcraft? Luther replied: Yes; for our bodies are always exposed to the attacks of Satan. The maladies I suffer are not natural, but devil's spells.

Luther said many things about witchcraft, about asthma and nightmares, and how his mother had been tormented by a neighbor woman who was a witch: “She was compelled to treat her neighbor with deference and try to conciliate her, for the neighbor had through witchcraft caused her own children such sharp pain that they cried themselves to death. A certain preacher taxed her for this, though in general terms; he, too, was poisoned and had to die, for nothing could restore his health. She had taken the soil from his footsteps, had cast a spell over it, and had thrown it into the water; without this soil he couldn’t be healed.”

Then Luther was asked whether such things can also happen to godly people. He answered, “Yes, indeed. Our soul is subject to a lie. When it’s freed, the body remains subject to murder. I believe that my illnesses aren’t natural but are pure sorcery. However, may God liberate his chosen ones from such evils!”


Conclusion
In comparing Hazlitt to LW 54, the gist is the same, but the content has variations.  In regard to the quote in question, while Hazlitt has Luther blaming Satan for illness, LW has him referring to "pure sorcery." For Luther, this amounts to a distinction without a difference, for sorcery stems from Satan.
Even though this is a Table Talk quote and not something Luther actually wrote, there's really nothing incorrect or blatantly out-of-context. Luther did have a strong belief in the Devil and the power of Witchcraft.
Posted by James Swan at 12:00 AM