Luther Acknowledged His Errors on the Real Presence in the Lord's Supper?

Here are two quotes attributed to Luther about Christ's not being present in the Sacraments.

The first is more indirect. Luther purportedly said in the Lord's Supper the body and blood of Christ are received by faith (in other words, not literally):

Of the Cause of the Sacrament.


THE operative cause of this sacrament, is the Word and institution of Christ, who ordained it. The substance is bread and wine; they prefigure the true body and blood of Christ, which is spiritually received by faith; the final cause of instituting the same, is the benefit and the fruit, the strengthening of our faith, not doubting that Christ's body and blood was given and shed for us, and that our sins by Christ's death certainly are forgiven. Now these graces and benefits we have obtained, in that he is our Saviour, our Redeemer and Deliverer; For though in Adam we are altogether sinners and guilty of everlasting death, and condemned; but now, by the blood of Christ, we are justified, redeemed, and sanctified; therefore let us take hold of this by faith.

Along with this, the second quote (from the same source) Luther is recorded as saying the pope forces people to believe in the real presence:


Of the Pope's Proceeding touching the Sacrament.
THE Pope denieth not the sacrament, but he hath stolen from the laity the one part or kind thereof; neither doth he teach the true use of the sacrament. The Pope rejecteth not the Bible, but he persecuteth and killeth upright, good, and godly teachers. Like as the Jews persecuted and slew the Prophets that truly expounded and taught the Scriptures. The Pope Well permitteth the substance and essence of the sacrament and Bible to remain: but yet he will compel and force us to use the same according to his will and pleasure, and will constrain us to believe the falsely feigned and invented Transubstantiation and the real presence. The Pope doth nothing else, but perverteth and abuseth all that God hath commanded and ordained.

Besides my Lutheran readers howling "no way!", what's going on here? Did Luther contradict his well-established view of the real presence of Christ in the sacrament? We'll see below these quotes may have been the result of one man's efforts in the seventeenth century to get a book of Luther's published in England. He appears to have added a few words to the text in order to appease the powers that be. The following is a representation of the research of Gordon Rupp from his book, The Righteousness of God (New York: The Philosophical Library, Inc., 1953), p. 76.

Documentation
Both of these quotes come from the Table Talk. Luther didn't write the Table Talk. It is a collection of second-hand comments written down by Luther's friends and students, published after his death. For these two quotes in the form they are in presented above, they come from the earliest English edition of Luther's Table Talk translated by Captain Henry Bell in 1652: Dris Martini Lutheri Colloquia Mensalia: Or, Dr Martin Luther's Divine Discourses at His Table, etc. The account of how Bell came across Luther's German Table Talk and had it translated into English can be found here.  It is a fantastical story, almost sounding made-up. Preserved Smith's critical study of Luther's Table Talk refers to Bell's account as "such a tissue of mistakes and improbabilities that it is hardly worth serious criticism," and also, "The whole thing has the air of being invented to heighten the interest of the translation." On the contrary though, Gordon Rupp sifted through the details of Bell's story and deems it a plausible account (See Rupp. pp. 56-77).

The Luther quotes occur on page 263 of Bell's translation: 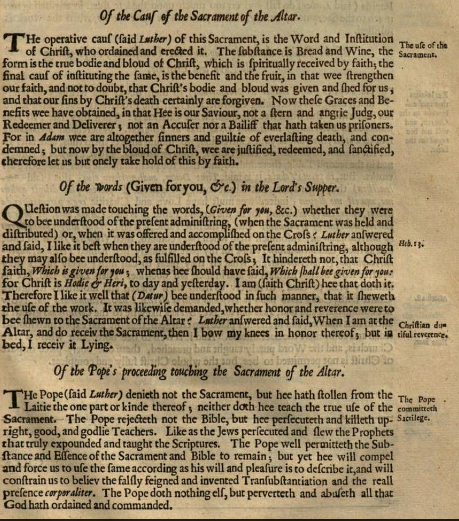 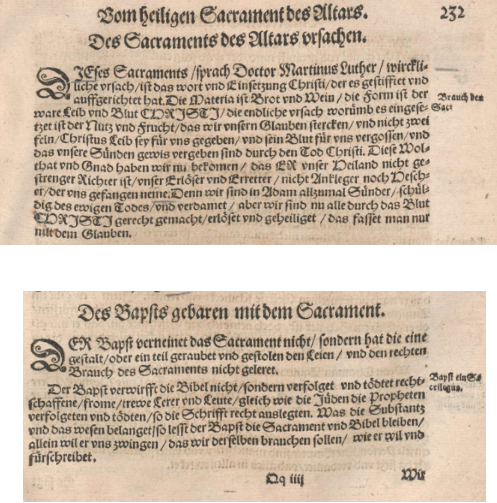 Of these texts, note Rupp's analysis on page 76. He mentions that the quote had English words inserted in that are not to be found in the German text of  Aurifaber:


But the most interesting section is the drastic abridgment by Bell of the long section in the original on "Vom Sacrament des Waren Leibs und Blutes Christi," now translated as "Of the Sacrament of the Lord's Supper." It will have been noted that the Parliamentary committee which examined Bell's book specially noted that in it Luther had acknowledged "his error which he formerly held touching the real presence corporaliter in coena domini."

Luther, of course, never did anything of the kind, and as far as I know there is no German edition of the Table Talk in which he makes any such dramatic retraction. It is obvious that this was the price paid by Bell to get his book authorized and published. The two alterations will be found in Bell's edition of Luther's "Divine Discourses" (1652), p.263:

"Of the cause of the Sacrament of the Altar. 'The operative cause... of this Sacrament is the Word and Institution of Christ who ordained and erected it. The substance is bread and wine, the form is the true body and blood of Christ which is spiritually received by faith."(1)

That could conceivably hold the Lutheran interpretation. The next is more explicit:

"The Pope well permitteth the substance and essence of The Sacrament and Bible to remain: but yet he will compel and force us to use the same according as his will and pleasure is to describe it, and will constrain us to believe the falsely feigned and invented transubstantiation, and the real presence corporaliter." (2)

The sentence about transubstantiation and the real presence has no place in the original.

Conclusion
Lest anyone get lost in the details, Rupp is pointing out that in the first quote, the phrase "which is spiritually received by faith" has been inserted into the English text. In the second quote, "and will constrain us to believe the falsely feigned and invented transubstantiation, and the real presence corporaliter" has been inserted into the text. These same insertions were picked up in later English editions of the Table Talk:

That there was an attempt by Bell to appease the powers that be has corroborating evidence in the prefatory material to Bell's translation. Note these words from the Report of the Committee of the House of Commons in Bell's edition (also mentioned by Preserved Smith):

The problem is that the majority (perhaps) of Caths do not even need to be constrained us to believe the falsely feigned and invented Transubstantiation, but believe it anyway, at least insofar as the understand it. Although only minority likely know that, while it is said that via the power given (only) to Cath. priests (which are absent in the life of the NT church) at the moment of the words of consecration, real bread and wine are substantially changed into the "the very body which he gave up for us on the cross, and the very blood which he poured out for many for the forgiveness of sins,"(CCC 1365) in His entirety, in each particle and in each drop (even subatomic), and in multilocation, in numberless separate Hosts,
so that "eating and drinking are to be understood of the actual partaking of Christ in person, hence literally,” (Catholic Encyclopedia>>The Real Presence of Christ..);

This also means that the actual bread and wine no longer actually exist, while the body and blood of Christ that is said to exist only looks, tastes, smells, behaves as actual bread and wine ("If you took the consecrated host to a laboratory it would be chemically shown to be bread, not human flesh" (Dwight Longenecker, "Explaining Transubstantiation").

And that this "Real Presence" only exists until the bread or wine(which no longer exist) begins to decompose The Eucharistic presence of Christ begins at the moment of the consecration and endures as long as the Eucharistic species subsist." (CCC 1377) "...that is, until the Eucharist is digested, physically destroyed, or decays by some natural process." (The Holy Eucharist BY Bernard Mulcahy, O.P., p. 32) At which point Aquinas argued that the substance of the bread and wine cannot return.

And which ritual is the central supreme exalted sacrament of Catholicism though absent as such in the NT church, while God/Christ never was preached as being looking etc. like an inanimate object, but His manifest physicality ("seen with our eyes,"...) was emphasized.

While within Gnosticism you had the belief that what Christ looked and behaved like was not real (Christ being a sort of phantom but looking human), in Catholicism you have the belief that (in transubstantiation) what Christ looks, feels, tastes and would test as (bread and wine), is not the reality (Christ's corporeal body and blood only looking like bread and wine). A Knights of Columbus article acknowledges: "the Most Holy Eucharist not only looks like something it isn’t (that is, bread and wine), but also tastes, smells, feels, and in all ways appears to be what it isn’t." (ibid, Mulcahy)

But since the self-proclaimed" one true Catholic church" (pick one) says it "really" Jesus Christ, then multitudes "have eaten the fruit of lies: because thou didst trust in thy way, in the multitude of thy mighty men." (Hosea 10:13) In contrast to the metaphorical understanding, which along easily conflates with John and the rest of Scripture.