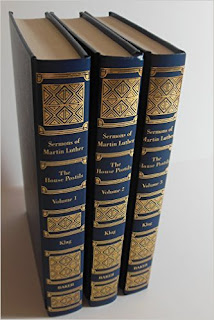 I came across two fascinating links documenting the difficulty in researching Luther's House Postil sermons. These sermons were delivered by Luther at his house (the old monastery) to his friends and family between 1531 - 1535.

Recently Concordia has released four new volumes of Luther's Church Postil sermons (LW 75-78). These new translations are helpful, particularly because of the extensive historical and critical footnotes. According to the links above, no such project is scheduled for the House Postil sermons:


"I found out that the 20 new volumes of Luther’s works being put out by Concordia Publishing House are not going to include Luther’s House Postil(s), in part because these have already been published in a three-volume series by Baker Books in 1996, edited by Eugene F. A. Klug."

Currently as I write this, I've been researching a Luther quote (used in a polemical way by Rome's defenders!) from the House Postil. While I'm partly working from the 1996 publication, it would be so helpful to have a critical English edition. These sermons were not written by Luther, but were put together by two men who heard them being preached (Veit Dietrich and Georg Roerer). In many cases, two versions of the sermons exist. These versions are said to compliment each other, rather than contradict (see the Complete Sermons of Martin Luther vol. 5 [Grand Rapids: Baker Books, 2000), p. 14-15]. The Baker edition relied on Roerer's version. There is an old two-volume English translation that used Dietrich's version: Luther: Sermons on the Gospels for the Sundays and principal festivals of the church year. The Baker edition does point out that attempts to recreate an "authentic version"of these sermons from the two accounts have not worked in the past. I'm not looking for the "authentic" version, but it would sure be helpful to have a critical version of both sets of sermons, side by side. In the links above, the writer points out that there are errors as well in the current English translations in the Baker set:


"Klug’s translation itself flows well. But it is not based on the more critical Weimar edition of Luther’s works, and so the content is often incorrect (e.g. §15 in 3:215, which Luther did not actually say) or incomplete (e.g. §20 in 3:228, which is incomplete because it does not take the Nuremberg copy of the sermon into account, where Luther refers to his health and leaves the completion of the series in doubt; and §1 in 3:229, which omits the entire first part of Luther’s sermon when he preached on the Gospel before continuing with his series on Isaiah)."

Another comment made by these links in this regard is worth pointing out as well: simply because these sermon notes have been transformed into readable accounts, there's still some ambiguity and interpretation as to what Luther actually preached:


I can also speak from experience that, in spite of Andreas Poach’s best intentions, he did not in fact publish an edition of Luther’s sermons “without any alterations, truncations, or additions.” (Refer, however, to Georg Buchwald’s remarks on Poach’s edition in Part 2.) While he is generally faithful to Rörer’s notes, and generally does an excellent job filling them out so that they read and sound more like sermons and less like shorthand lecture notes, the fact is that he does fill them out, and sometimes he takes liberties that are distasteful (e.g. making Luther a little more uncouth than Rörer has him in his notes) or even completely incorrect. This is why, if a translation is to be made of any of the House Postils – and really, any work of Luther – it must at the very least seriously consult and compare the more critical Weimar edition, which takes the reader back to the original notes, instead of to any editor’s publication and interpretation of those notes.

I've been looking into obscure Luther quotes for over fifteen years now. The deeper I've researched them, the more I've come to realize that there are broad classes of reliability as to what Luther actually said:

My particular enjoyment in reading Luther is seeing what Rome's defenders say he said and then comparing it to what is actually said in context. I've come to realize that even though I may have located a context for a particular quote, in many cases I'm actually I'm relying on documents Luther didn't actually write. Do Rome's defenders realize this? On the pop-apologetic level, probably not.

Addendum
Included in the links above is a fresh English translation of the preface of WA 52:VII-XI and the Foreword to Volume 1 of the Second Edition of the Erlangen Edition of Luther’s Works. Also, of interest is the article Fragments and Crumbs’ for the Preachers: Luther’s House Postils in Logia.
Posted by James Swan at 12:00 AM

Hi James, just came across this post referring to my two translations related to Luther's House Postils. You may also find this post interesting, which provides one example of how Dietrich's original transcript evolved -- Dietrich (as copied by Roerer) to Dietrich's editing to Poach's editing to Klug's editing. God willing, this will all be detailed thoroughly in the preface of my forthcoming Luther Christmas devotional from NPH, along with pictures and diagrams to illustrate. Also, one of my express intentions in undertaking my translation of Luther's 1531 Christmas sermon series on Isaiah 9:6 from Luther's House Postil was to produce sermons that a person can quote and say with a reasonable degree of certainty, "Luther said that." I am convinced that Luther's copiers were, in the main, talented and reliable men and that, especially when there is more than one transcript of the sermon available, it is possible with some time, skill, work, and, above all, familiarity with Luther himself, to accurately reproduce what he said.

I would mostly agree with your assessment about reliability, with the possible exception of the Table Talk. The various editions of the Table Talk throughout the years are certainly not reliable on the whole (e.g. Aurifaber's edition). However, with the disclaimer that you have to pay attention to forewords and prefaces in the Weimar Edition in order to determine the origin of any particular collection of Table Talk, I would say that the Table Talk are just as "Moderately reliable" as Luther sermons as recorded by those who heard him preach.

God's blessings on your blog and time with Luther.

Just realized I never actually the link to "this post" referred to in my comment. Here it is: https://redbrickparsonage.wordpress.com/2015/06/06/luther-sermon-reader-be-aware/.

Thanks so much for stopping by and leaving a comment. I thoroughly enjoy your work on the House Postils, and I look forward your upcoming publication, please keep me "in the loop."

I've been digging in to polemical Luther quotes for a number of years. At first, I simply did not realize the extent of Luther's writings that were not written by his own hand!

Hi James, just wanted to let you know that the book referenced in my earlier comments here is now out and available for purchase. And actually, if you're only interested in the preface about Luther's House Postils, that is available for free viewing in a rather large free preview: http://online.nph.net/p-23785-luther-at-the-manger.aspx Thanks for your interest, and I hope this reference aids you in continued learning about Luther and edification in God's word.