Luther: For we account a man to be justified by faith alone, without the works of the law

The following is from the web page Luther, Exposing the Myth, under the heading "Faith and Good Works":

Luther Exposing the Myth says their stated purpose is to show that "from Luther’s own words we shall see him for what he really was, that is a rebellious apostate, who abandoned the faith and led many into apostasy from God under the guise of “reformation” in order to follow his perverse inclinations." With this quote, they attempt to show Christ valued works as part of salvation, while Luther taught justification before God was by faith alone without works. 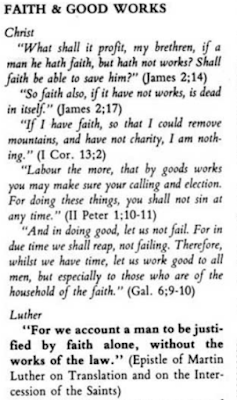 While no edition or page number is provided, the quote does appear in Luther's Letter on Translating from 1530. The complete original text can be found in WA 30 II: 632-646. This text has been translated into English. It can be found in LW 35:175-202, and also PE 5, 10-27. There are online versions as well, for instance that done by Michael D. Marlowe, June 2003 (nicely aligned with the German text) and that provided by Project Wittenberg.

Context
This particular quote comes from the very beginning of the open letter:


To the Honorable and Worthy N., my favorite lord and friend.
Grace and peace in Christ, honorable, worthy and dear Lord and friend! I received your letter with the two questions, or inquiries, requesting my response. In the first place, you ask why in translating the words of Paul in the 3rd chapter of the Epistle to the Romans, Arbitramur hominem iustificari ex fide absque operibus, I rendered them, "We hold that a man is justified without the works of the law, by faith alone," and you also tell me that the papists are causing a great fuss because Paul's text does not contain the word sola (alone), and that my addition to the words of God is not to be tolerated. Secondly, you ask whether the departed saints intercede also for us, because we read that angels intercede for us. Regarding the first question, you can give the papists this answer from me, if you like.


Conclusion
Luther then goes on to give a detailed explanation of why he uses the word "alone" in Romans 3:28. This type of selective citation employed by Luther, Exposing the Myth shows an utter unfamiliarity with Luther's theology. It attempts by the use of a single sentence, snatched from its context and ignores Luther's actual understanding of the relationship of faith and works.

An honest translator, Luther freely admitted the word “only” does not appear in the original Greek at Romans 3:28. He never sought to have the word added into any ancient manuscript. He states,


I know very well that in the original text this word does not occur. Nevertheless it belongs in any good German translation… Whenever we place two things in opposition and want to make clear that we acknowledge or accept the one and reject the other, we use the word ‘only.’ ‘The farmer brings no money but corn only.’ ‘No, at the moment I really have no money, but only grain.’ ‘I have only eaten, but not yet drunk.’ ‘Have you only written, without rereading?’ This is the form which we use in countless expressions: over against ‘not’ or ‘none’ we have the word ‘only,’ to make the contrast clear.

Luther Exposing the Myth repeatedly uses quotes from Luther suggesting works were not important in his theological system. Luther though understood that even our best efforts were tainted with sin. If God demands perfection in order for one to be justified before Him, no one would ever be justified. For Luther, justification was actually totally of works, but those works were perfect and performed by the perfect savior, Jesus Christ. These works are acquired by faith, imputed to the sinner. Luther says elsewhere,


[I]f you desire to believe rightly and to possess Christ truly, then you must reject all works that you intend to place before and in the way of God. They are only stumbling blocks, leading you away from Christ and from God. Before God no works are acceptable but Christ's own works. Let these plead for you before God, and do no other work before him than to believe that Christ is doing his works for you and is placing them before God in your behalf [The Complete Sermons of Martin Luther 1:110].

For Luther grace, faith, and the work of Christ are essential ingredients that justify, and that justification is a gift as well as the very faith involved. As Paul says in Ephesians 2:8-9, “For by grace have ye been saved through faith; and that not of yourselves, it is the gift of God; not of works, that no man should glory.” If God judges a man by Christ’s perfect works, why should any Christian ever care about leading a righteous life? If grace, faith, and justification are God’s gifts, what is left for us to do? Eat, drink, and be merry, for tomorrow we die.

Paul answers in Ephesians 2:10, “For we are His workmanship, created in Christ Jesus for good works, which God afore prepared that we should walk in them.” Faith performs good works, not to keep one justified, but out of heartfelt gratitude to God graciousness. Salvation is unto good works. Note what this means: good works are not unto eventual salvation. We are saved in order to perform good works, not by performing them.

“Faith,” wrote Luther, “is a living, restless thing. It cannot be inoperative. We are not saved by works; but if there be no works, there must be something amiss with faith” [link]. The book of James describes a real true faith in Christ: a real saving faith is a living faith. If no works are found in a person, that faith is a dead faith (c.f. James 2:17). James then describes a dead faith: the faith of a demon. A demon has faith that God exists, that Christ rose from the dead- I would dare say a demon knows theology better than you or I. But is the faith of this demon a saving faith? Absolutely not. Luther says, “Accordingly, if good works do not follow, it is certain that this faith in Christ does not dwell in our heart, but dead faith…” (LW 34:111).

Addendum (2016)
This blog entry is a revision of an entry I posted back in 2010. The original can be found here. Because so many sources are now available online, I'm revising older entries by adding additional materials and commentary, and also fixing or deleting dead hyperlinks. Nothing of any significant substance has changed in this entry from that presented in the former.
Posted by James Swan at 12:00 AM

Althaus is probably one of the best specialist on Luther's theology and you are in good time will become at par with him, if not yet.