Review- Luther: The Rest of the Story by Ken Hensley (Part One) 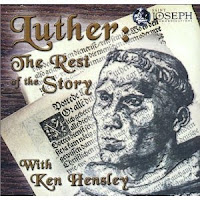 More than a few times I've heard Catholic Answers recommend Luther: The Rest of the Story By Ken Hensley (2003). It isn't a book, but rather a series of three lectures, available on CD, and via MP3 download from Saint Joseph Communications. As of the writing of this review, used copies of the CD's are available on Amazon for $65 up to $161.00. Why? I'm not sure, as the new sets are only $23. Perhaps materials from Saint Joseph Communications are collectible.

The lectures are advertised as follows:

Luther: The Rest of the Stroy [sic] CD
In an uncompromisingly Catholic presentation on the true teachings of the man who changed the face of Christianity. A former Protestant Pastor, Hensley brings a unique perspective to the critical examination of a man whose doctrines he once held with great devotion. As you listen to his in-depth analysis on three digitally mastered CDs, you’ll discover Luther’s theological, personal and historical background and motivations, from the testimony of his own writings. And follow the tangled web woven by the “Father of the Reformation” from the day he nailed his infamous 95 theses on the door of the Castle Church at Wittenberg to the theological wreckage of modern Protestantism. [source]

...[T]his is no inflammatory “tell-all” exposé but an intelligent (and entertaining) investigation into the real-life convictions and contradictions of this controversial figure. Here at last is a serious discussion of Luther from a Catholic perspective that’s insightful, informative and, best of all, suitable to share with Protestant (and fallen-away Catholic) friends and family.

Whatever your opinion of Luther and his religious revolt, you owe it to yourself to discover the surprising truth about his actual teachings and his little-known devotion to much that has been rejected by his spiritual descendants. With Ken Hensley’s perceptive presentation and analysis, Luther: The Rest of the Story will equip you to effectively defend Catholic truth, but also to better understand the reality of many important theological and historical misconceptions. Get ready — it’s time to set the record straight! [source]

After listening to almost all of these three lectures, I decided a review of Hensley's arguments would be a worthy endeavour. I strongly disagree with the above advertising blurbs. The lectures, while at times cordial and entertaining, present the typical negative outdated polemic that so infects pop-Roman Catholic apologetics.

About Ken Hensley
Previous to listening to this series, I hadn't heard of Mr. Hensley. He appears to be a speaker still affiliated with Saint Joseph Communications (SJC). SJC is most famous for its star apologist, Dr. Scott Hahn. Hahn and Hensley knew each other previous to their "conversions" to the Roman Catholic Church, and Hahn played a role in Hensley's conversion to Romanism.

Hensley was a former American Baptist minister (of eleven years), and became Roman Catholic in 1996. A truncated discussion of his conversion story was given on Catholic Answers many years ago (MP3 available here). He received his Bachelors Degree in Scripture and Theology from Grace Bible College and his MA degree from Fuller Theological Seminary.

In lecture one he mentions he had only been a Christian one or two years in Junior college when he first heard about Martin Luther via the old 1953 movie. He mentions that the movie so impressed and inspired him, it left him with tears in his eyes and a desire to be like the man portrayed in the movie. Subsequently, he read thousands of pages of Luther's writings, took an entire course at Fuller on the theology of Martin Luther, and owns (and has read) a number of biographies on Luther. Thus, his qualifications for giving these lectures are: his previous education and readings, Baptist ministry, and conversion to Roman Catholicism. He's a man who has seen both sides: Protestantism and Roman Catholicism. Who better to explain Luther than a former Protestant turned Roman Catholic?

Qualified to Tell the Rest of the Story?
After listening to his Luther series I do have reservations as to Hensley's qualifications to tell "the rest of the story" about Luther. In this short MP3 clip from his Catholic Answers interview, he says the worldview of Protestantism was "assumed" rather than explored at seminary. That is, the direct conflict that gave birth to the Reformation was not looked at with any appropriate depth. How then a seminary level class on Luther's theology was handled at Fuller is indeed a mystery, since Luther's paradigms are best understood against the backdrop of the sixteenth century Church. I also have had a seminary level class on Luther's theology. Understanding the culture and theology of the sixteenth century was a crucial aspect to grasping the material. The conflict which caused the Reformation couldn't be missed.

Second, "Lutheran" and "American Baptist" are not quite two pegs which fit in the same hole. Luther's theological paradigms are not typically studied and digested by those who aren't Lutheran. The longer I study Luther's theology, the more I realize his theology isn't Reformed, Baptist, or Methodist, etc. While there are points of agreement, it's a different breed of cat, so to speak. I would be more willing to grant that a former (conservative!) Lutheran minister would be able to tell "the rest of the story" about Luther than I would a former American Baptist. If Hensley so wanted to be like Luther, becoming an American Baptist instead requires quite a number of disagreements with Luther's theology. In fact, I would say that an American Baptist could likewise tell their own story about their disagreements with Luther.

As to his assertion that he'd read thousands of pages of Luther and many biographies previous to these lectures, the material presented didn't give me much confidence in such claims. He quotes heavily from Roland Bainton's Here I Stand and Heiko Obermann's Luther: Man Between God and the Devil. He also mentions The Theology of Luther by Paul Althaus in passing. He claims that citing Luther directly from his own writings is of great importance to his lectures, but he presents many of the popular quotes typically sifted from Luther's writings used by earlier generations of Roman Catholic polemicists. I wouldn't be at all surprised to find out Patrick O'Hare's The Facts About Luther was also consulted, as well as other Roman Catholic books slanted against Luther. More often than not, it was those context-less quotes I've seen a thousand times typically brought up by Roman Catholics that Hensley used. Thus I really do wonder if the quotes came more from Luther-hostile sources than Hensley's own readings of Luther. This will be demonstrated as the Luther quotes used are reviewed.

Conclusion
It's not my intention to slander Mr. Hensley. Rather, any who read this blog know that I often review Luther materials put out by Roman Catholics. Some of the material he presented was quite interesting. In fact, in this blog entry I made reference to Hensley's opinion on Luther's early journey to Rome. Hensley comes right out and says Rome was more or less morally depraved from head to toe. That Luther questioned his faith in Rome should be of no surprise. In fact, Hensley says if Papal leadership doesn't act morally, this is what one should expect of her faithful followers. I add, Hensley's comments should be applied to Rome's current scandal.

His section on Justification in lecture two would truly befuddle many Protestants. His argumentation is clear, and I commend him for laying out Rome's position in such a way that it could be easily understood by a nominal Roman Catholic while at the same time send a Protestant back to the Bible in search of an exegetical response.

It might take a while to work through Hensley's series. But, I think any Protestant coming in contact with the material presented would be hard pressed to formulate a response without being familiar with the issues raised, both biographical and theological. This doesn't mean I've ceased reviewing Biblical Catholic Answers for John Calvin. I plan doing that at one entry per week, or when I get to it.
Posted by James Swan at 11:32 AM

Labels: Ken Hensley, Luther: The Rest of the Story

Please look for "Challenged by Lutherans Regarding Three Luther Quotes on Mary: Read the Facts and Decide for Yourself How it Turned Out"

Unknown said...
Please look for "Challenged by Lutherans Regarding Three Luther Quotes on Mary: Read the Facts and Decide for Yourself How it Turned Out"

If you really want to know about Luther's views on Mary, simply read some of my blog entries.