Luther: Is The Church Over Scripture? 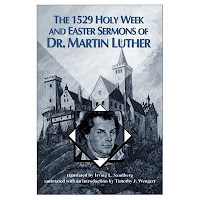 Further they object: The church has accepted the four gospels, others they have not accepted. Thus the church is master over them. If not, who would know which gospel were true, perhaps Bartholomew's gospel or another? That sounds just as if we had the gospels from the church and not from God. Christianity has accepted the book, they say, therefore Christianity is over the book. I accept the teaching of Paul, therefore I am over his teaching. Oh, that they had made the distinction between confessing and haying authority! The Christian church confesses that the teaching, the Gospel, the book are true. But thereby the church is not given the authority over it. Then I could also say: I accept Christ, therefore I am over Christ. Or I would say of the prince of the land: Duke Hans of Saxony is my prince, not Duke George and the Margrave. I accept the former, not the latter; therefore because he is my prince, I am over him. Would he allow this? Would he allow his command to be changed? Is that indeed consistent?

Similarly, a lawyer could say: This command the emperor has fixed, that one a false teacher has fixed. Therefore this scholar stands over the emperor because he can distinguish between what the emperor has fixed and what another fixes. You've got to be kidding yourself! So they conclude quite foolishly: The Christian church confesses that this book and its teaching are true, therefore it is over them. These are rotten hoaxes. Christ has given the church this authority, to separate between truth and falsehood, as he says in Matthew 7:15: "Beware of false prophets!" When the evangelical teaching spread throughout the world from the apostles, upright teachers saw and received it; but other books that did not correspond to this, they discarded. So we also do. But I cannot conclude: Because I accept John's gospel, I am over the same. For this reason say: It is not true; the Christian church does not have the authority to change a single letter. For it is written in Matthew 5:19, "Whoever breaks one of the least of these commandments, and teaches others to do the same, will be called least in the kingdom of heaven." Add nothing and take nothing away. It should remain as Christ has ordered it.

Labels: Luther and the Canon

This is SO classic you. You post a quote from Luther, or something that somebody wrote ABOUT Luther, and then you just "leave it hanging there", I guess expecting us ALL to "get it", just like Luther expected us ALL to understand what Scripture "means" by simply reading it. Luther was wrong. That did not "happen" in Protestantism and it shocked him. For you to simply throw this "stuff" on the wall, without taking a "position", about what it "means to you"......well, it ain't "brave".

I do recognize you normaly refuse to take a position on what a particluar quote DOES mean (to you), but prefer only to put yourself in a position to criticize what other people say about it. You depict yourself as being someone who knows A LOT about Luther, and no doubt you do, so why not take a stand in regards to what you actually believe about the man?

Some time ago, I think you made the comment that other "contributors" here, like turr and somebody else, had much better "luck" getting people to respond to their opening statements. There could be a reason for that and that reason could be that they are not "afraid" to actually "say stuff" about what they believe.

It's all very "safe" the way you "play it". Luther was not so reticent.

God Bless You James, Tim (still not an MD but from MD)

Now, how bout completing my "difecta" by commenting on MY "failings" and misunderstandings, ect. rather than dealing with what I actually said.

I realize that you are part of an elite group of Romanists that are befuddled by contexts and require interpretations of all written materials. However, I can't hold your hand and walk you through every text I post.

I typically post a text I find interesting. In this case, I found this section from Luther's sermon interesting because it shows he dealt with the same arguments that are around now. There is nothing new under the sun.

As to having the "luck" of receiving comments back from something I post, I really don't need a pat on the back or a comment to make me feel good. While I appreciate that someone reads this blog or makes a comment, it doesn't break my heart if comments aren't posted.

As to taking a stand on Luther, I think he was gifted writer, a devoted pastor, and an insightful theologian. On the other hand, he was a sinner and fallible, like the rest of humanity.