Luther: I have so much to do that I shall have to spend the first three hours in prayer 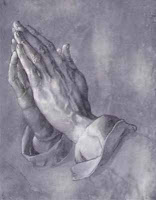 I know you love chasing sources for Luther quotes. I know he's widely quoted as saying "I have so much to do that I shall have to spend the first three hours in prayer", but I can't find a source for it. I thought I'd flick you an email to see if you've ever tried tracking a source for this one down. Have you?

If you Google search it, you'll get numerous hits. This source from 1896 states,


Martin Luther, upon being asked one time by a friend what his plans were for the following day, replied, "Work, work from early until late. In fact, I have so much to do that I shall spend the first three hours in prayer" (c.f.  1871; 1880).

Other variants of this rendering state, "Work, work, from morning until late at night. In fact, I have so much to do that I shall have to spend the first three hours in prayer." One lengthier variation reads,


Martin Luther famously said, "If I fail to spend two hours in prayer each morning, the devil gets the victory through the day. I have so much business, I cannot go without spending three hours daily in prayer."

Spurgeon Not Luther?
So where did this quote come from? There were a flurry of variants and usages of it in the late nineteenth century and early twentieth century. I suspect the quote was popularized via the publication of C.H. Spurgeon's writings. Note this secondary source quoting Spurgeon:


PRAYING AND WORKING. I Like that saying of Martin Luther, when he says, "I have so much business to do to-day, that I shall not be able to get through it with less than three hours' prayer." Now, most people would say, "I have so much business to do to-day, that I have only three minutes for prayer; I cannot afford the time." But Luther thought that the more he had to do, the more he must pray, or else he could not get through it. That is a blessed kind of logic: may we understand it! "Praying and provender hinder no man's journey." If we have to stop and pray, it is no more hindrance than when the rider has to stop at the farrier's to have his horse's shoe fastened; for if he went on without attending to that it may be that ere long he would come to a stop of a far more serious kind.—C. H. Spurgeon.

There were a number of sources similarly citing this snippet from Spurgeon. The snippet  appears to come from Spurgeon's sermon 1865 sermon, Degrees of Power Attending the Gospel (pdf).  The date  of the sermon is relevant in trying to determine where Spurgeon took the quote from. Spurgeon's primary language was English. During this time period, there was only a limited pool of Luther's writings available in English. I think it's safe to rule out Spurgeon reading Luther in German; Spurgeon's education was limited, and I don't think he knew German. This is not to imply that Spurgeon was not intelligent or intellectual. I've read that he may have had a photographic memory. This website states, "Spurgeon had no formal education beyond Newmarket Academy, which he attended from August 1849 to June 1850, but he was very well-read in Puritan theology, natural history, and Latin and Victorian literature." Christian History says he was tutored in Greek and "his personal library eventually exceeded 12,000 volumes." Spurgeon's autobiography states his study of Latin began in 1845. So, it's possible Spurgeon could have read Luther in Latin.

I suspect though,  Spurgeon was simply working from memory in his sermon and not citing Luther directly.  The quote, as has been popularized, may simply be Spurgeon's recollection of what he recalls reading Luther to have said.

Conclusion
I have not found any evidence that Martin Luther penned or uttered the exact words of the variants posted above. Interestingly,  Luther's Table Talk does say,


"I have every day enough to do to pray" (source)

"I," said Luther, "have every day enough to do to pray; and when I lay me down to rest and sleep, and pray the Lord's Prayer, and afterwards take hold of two or three sentences out of the Bible, and so take my sleep, then I am satisfied." (source)  (source)

This could very well be what Spurgeon was recalling, coupled with the fact that Luther was known to spend much time in prayer.  I found this review helpful: Martin Luther on Prayer. The author presents a detailed look on Luther's view on prayer. It's probably the case that Luther did not utter this saying, but it would in fact be in harmony with his view of prayer. 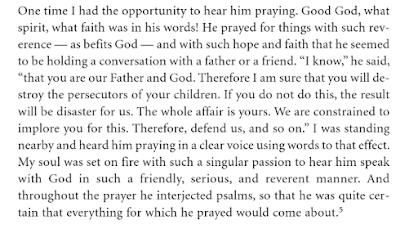 Addendum
This is a revision of an earlier blog entry. The original can be found here.
Posted by James Swan at 5:28 AM

Thank you for featuring this.

This is so true. Luther was a prayer "warrior" so to speak.

Luther if his Large Catechism is a guide, is so into prayer. When I read his LC III, his preface on the Lord's Prayer I honestly can say I walk away wanting to pray. He grounds it in the Gospel, that God is for you even though you are such as sinner as you are. You walk away with a positive attitude towards God and a sense of gratitude and joy - it is a very prayer motivating exposition on prayer.

Luther has something to teach on this issue which will enrich the modern cafe latte Evangelicals out there.

From ...prayer came the power that shook the world in the Great Reformation. ... During the struggle at Augsburg, Luther “did not pass a day without devoting three hours at least to prayer, ... he was heard to pour out his soul before God in words “full of adoration, fear, and hope, as when one speaks to a friend.” “I know that Thou art our Father and our God,” he said, “and that Thou wilt scatter the persecutors of Thy children; for Thou art Thyself endangered with us. All this matter is Thine, and it is only by Thy constraint that we have put our hands to it. Defend us, then, O Father!”—D’Aubigne, b. 14, ch. 6. {GC 210.1}
{GC} Stands for "Great Contorversy" By Ellen G White

So where did D'Aubigne get the quote from?

And the way Luther treated those who he disagreed with I'm pretty sure EGW would have been drowned for heresy (they usually only drowned the women).

This page refers to a letter Viet Dietrich wrote to Melanchthon in 1530. The text reads,

That is the description of Luther praying for three hours.

Luther did not kill people he disagreed with, nor did he have anyone drowned.

Thanks again for the research. I wanted a textual copy of Dietrich's description of Luther's prayers so I copied the image and used https://www.onlineocr.net to convert it:

One time I had the opportunity to hear him praying. Good God, what spirit, what faith was in his words! He prayed for things with such reverence - as befits God - and with such hope and faith that he seemed to be holding a conversation with a father or a friend. "I know," he said, "that you are our Father and God. Therefore I am sure that you will destroy the persecutors of your children. if you do not do this, the result will be disaster for us. The whole affair is yours. We are constrained to implore you for this Therefore, defend us, and so on..

I was standing nearby and heard him praying in a clear voice using words to that effect. My soul was set on fire with such a singular passion to hear him speak with God in such a friendly, serious, and reverent manner. And throughout the prayer he interjected psalms, so that he was quite certain that everything for which he prayed would come about. (Timothy J. Wengert: “The Pastoral Luther: Essays on Martin Luther's Practical Theology,” p. 172; Fortress Press, Jan 1, 2017)

Man, do I come short of that in spirit and deed. And then there was,

Epaphras, who is one of you, a servant of Christ, saluteth you, always labouring fervently for you in prayers, that ye may stand perfect and complete in all the will of God. (Colossians 4:12)