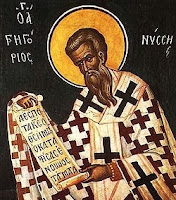 Here's an interesting tidbit I didn't find, but is well worth pointing out why one should check sources and references, particularly those put forth by the advocates of Romanism. Sometimes when they mine nuggets from the church fathers, what they weigh on the scale of truth is Pyrite, fool's gold.

The following is from Revds. J. Berington and J. Kirk, The Faith of Catholics, Confirmed by Scripture and Attested by the Fathers of the First Five Centuries of the Church, three volumes, Third Enlarged Edition, with Preface, Corrections, and Additions by the Rt. Rev. Monsignor Capel, D.D. (New York: Fr. Pustet & Co., 1909), on page 414. He cites Gregory of Nyssa (c. 335-395) stating:

"Let Eunomius tell us whence he derives this assurance? From what inspired declaration? Which of the evangelists, which of the Apostles has uttered any such declaration? What prophet, or lawgiver, or patriarch, or which amongst the others whom the Holy Ghost has inspired, whose declarations are unwritten,' introduced any such term. Whether have we learned in the tradition of the faith from the truth that we ought to believe Father, and Son, and Holy Ghost, or that He is a creature? How happened it that the Truth, whilst transmitting to us' the mystery, gave as a law faith on the Son, and not on the creature?"

So there you have it, a quote from Gregory of Nyssa to support Rome's claims of inspired unwritten traditions. The author even provides the Greek text to substantiate his claim.

When one checks the Greek, the word Gregory used was ἀνάγραπτοι. It does not mean “unwritten,” but the very opposite, “recorded” or “committed to writing.” The text should be rendered:

"Let him say, whence he derives the boldness to affirm this : from what divinely-inspired testimony? What Evangelist, what Apostle uttered such a saying? What prophet, or lawgiver, or patriarch, or any one else of those who were divinely inspired by the Holy Spirit, whose words are committed to writing, taught such a phrase? We have learnt in the tradition of the faith by the Truth to believe in the Father, and Son, and Holy Spirit. Ought we to believe that he is created? How is it that the Truth when delivering to us the mystery has enjoined faith in the Son and not in a creature? And how is it that the divinely-inspired Apostle, while he worships Christ, declares that those who extend their worship beyond the Creator to the creature are idolaters?" William Goode, The Divine Rule of Faith and Practice, 2nd edition, Vol. 3, (London: John Henry Jackson, publisher, 1853), p. 142.

Remember, all that is Google Books is not gold. I am grateful to the person who pointed this out to me. Old books from Google are wonderful, but not always accurate.
Posted by James Swan at 5:43 AM