Cyril's Proof for God's Special Revelation Outside of Scripture 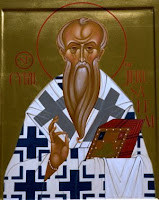 Even to me, who tell thee these things, give not absolute credence, unless thou receive the proof of the things which I announce from the Divine Scriptures. For this salvation which we believe depends not on ingenious reasoning, but on demonstration of the Holy Scriptures.- Cyril of Jerusalem, Catechetical Lecture IV, Section 17

That's straightforward isn't it? Recently, Matthew Bellisario commented on this quote saying, "Saint Cyril however never tells us that Scripture alone is how the Church receives its only Divine Revelation and where it gets its only authority from."

I presented this question to Matthew: If Cyril believed in another infallible "voice of God", I'd be willing to see your proof. That is, demonstrate that Cyril likewise told his readers to look to "x" to see the rest of God's infallible deposit given to humankind. As the quote stands, it really does sound like Cyril was telling his readers to check him out based on Scripture.

Hi James, thanks for stopping by. What do you make of this text by St. Cyril from Catechetical Lecture No 17 focusing on the Holy Spirit?

"1. In the preceding Lecture, according to our ability we set before you, our beloved hearers, some small portion of the testimonies concerning the Holy Ghost; and on the present occasion, we will, if it be God's pleasure, proceed to treat, as far as may be, of those which remain out of the New Testament: and as then to keep within due limit of your attention we restrained our eagerness (for there is no satiety in discoursing concerning the Holy Ghost), so now again we must say but a small part of what remains. For now, as well as then, we candidly own that our weakness is overwhelmed by the multitude of things written."

So, I went and looked up the quote. If Cyril's statement "if it be God's pleasure, proceed to treat, as far as may be, of those which remain out of the New Testament" is the key phrase from Cyril that was meant as an answer to my question, one would expect Cyril to then launch into these things "outside."

Take a look though at Lecture 16.32, which is the last statement before Lecture 17:

32. And indeed it were easy to collect very many texts out of the Old Testament, and to discourse more largely concerning the Holy Ghost. But the time is short; and we must be careful of the proper length of the lecture. Wherefore, being for the present content awhile with passages from the Old Testament, we will, if it be God’s pleasure, proceed in the next Lecture to the remaining texts out of the New Testament. And may the God of peace, through our Lord Jesus Christ, and through the love of the Spirit, count all of you worthy of His spiritual and heavenly gifts: - To whom be glory and power for ever and ever. Amen.

The point is not that's he's looking at extra biblical revelation from God outside the Scriptures, but rather, he's going to look at proof "out of" the New Testament. In fact, skim through Lecture 17, and count the verses he uses from the New Testament, it is literally, a multitude.

I haven't read a lot of Cyril's writings. If indeed Cyril held to another infallible voice of God other than the Scriptures, Lecture 17 isn't proof for it.
Posted by James Swan at 11:27 AM

It is possible Matthew meant something else by posting the quote from Catechetical Lecture No 17. In that case, he can clarify.

I recommend you and the reader of this post to do an extensive research of NT and Pauls doctrines at the below website (and learn what the followers of first century Ribi Yehoshua (the Mashiakh - Messiah) – the Netzarim - said about Paul and the Church) to find about its origin and the origin of the Church.